Time to Teach Our Kids About Statues, Instead of Toppling Them 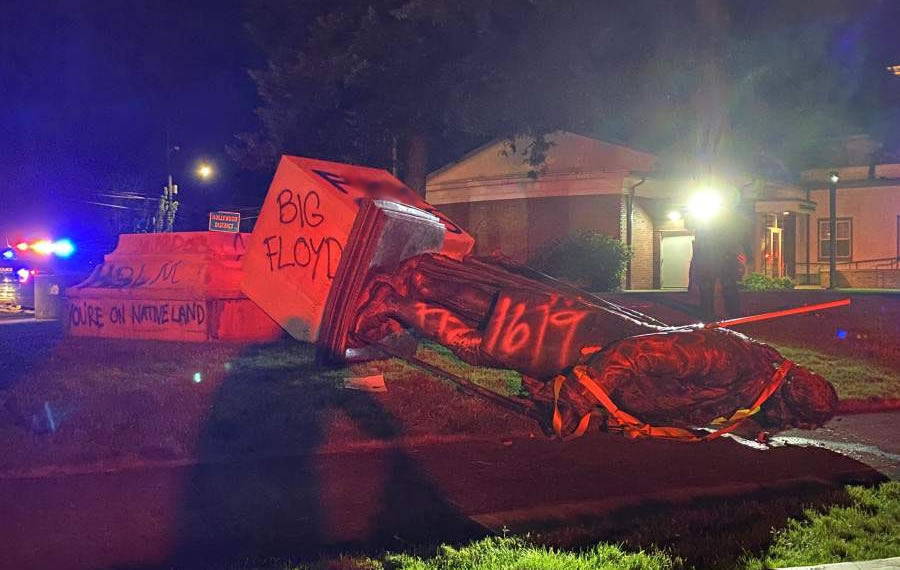 The great Ronald Reagan once said that “the problem with our liberal friends isn’t that they’re ignorant. It’s just that they know so much that isn’t so.” Reagan correctly diagnosed the Democrats’ main malady six decades ago. But back then the symptoms were comparatively mild. That party opposed tax cuts and the military, and many in it feverishly favored big government, the USSR, and hippies.

But most Democrats still bought into the American system. They respected the Founding documents, as well as the men who wrote them and drove the Revolution. Both the First and the Second one (the Civil War). Washington, Jefferson, Lincoln, and Grant were still great men — and if Democrats wanted to include FDR in that category, at least they didn’t toss out the former ones.

Democrats and Educators are Infected with Marxism

All that has changed. And it’s far worse. Marxism afflicts not just the far Left but the whole Democrat party. One of the two major American political parties now rejects, in large part, America as it’s constituted. There are various theories as to how that has happened. But it’s undeniable that radical ideology has taken over higher education and public schools. Ironically, and tragically, the very year that Ronald Reagan won the Presidency, the Marxist Left gained a huge countervailing victory.

In 1980, Howard Zinn published his malicious book The People’s History of the United States. Despite its many factual flaws and outright propaganda, many school systems use Zinn’s book to this day. And it has spawned even more misleading offspring. Notably, the “1619 Project,” aimed at “creating…hatred for the nation’s founding, its ideals, and for America’s majority group.” How? By ahistorically claiming that the American colonies were founded solely on slavery, and that the Revolution was fought to preserve it.

Case in Point: The Summer of Hate

Whatever the origins of America-hating Marxism, we certainly need to stop it before the cancer takes over. If it’s not already too late. During 2020’s summer of hate, Antifa and BLM tore down statues of historical figures from sea to shining sea. And not just Confederate Generals (as President Trump prophesied.) George Washington, Ulysses S. Grant and Teddy Roosevelt were targeted. Of course Christopher Columbus was also erased. Then for a Christmas gift, the city of Boston razed a statue of the Great Emancipator himself — just because there was a freed slave at Lincoln’s feet. When the leaders of the very city where our Revolution began are trying to erase the greatest President in our history, our society has gone off the rails.

Now It’s the Party of Hate — for the Republic

And it’s gotten worse. No longer content to erase history, Democrats want to burn our whole system down. Hillary Clinton, after losing the Presidential election in 2016, called for abolishing the Electoral College. Perennial pro-war blowhard Max Boot seconded that notion, adding for good measure that he finds federalism itself tedious and boring. Channeling their beloved FDR, Democrat leaders favor packing the Supreme Court. And just today a poll shows that a majority of all Democrats support abolishing SCOTUS entirely.

A Plan to Fix Education

What can men and women do against such reckless hate for America? The first thing we do, let’s kill all the Marxist indoctrination. A group called the “Civics Alliance” (CA), an offshoot of the National Association of Scholars, has come up with a plan to do just that. It’s called “American Birthright: The Civic Alliance’s Model K-12 Social Studies Standards.” At 149 pages, it’s quite detailed. Here are some of the highlights.

CA blames the likes of the “1619 Project” and Ibrahim X. Kendi’s anti-white racism on the Obama Administration. Specifically, its 2012 agenda, “A Crucible Moment: College Learning and Democracy’s Future.” This pushed traditional American history and aside. For what? Identity politics, environmental activism and “global citizenship.” (Which was made possible by Zinn, alas.)

Instead of being taught that slavery, racism and exploitation define this country, citizens need education in “history, philosophy, and qualities of character.” This should include the Revolution, the Founding, the Declaration and Constitution. Also “the structure and function” of our Republic. High school students need a heavy dose of the Bill of Rights, checks and balances, electoral politics.

College students would learn, too, the basics of Western civilization and political theory. Teachers should also be tested on this material. And actual knowledge of the American Republic should replace “service learning,” which is simply another name for Leftist activism.

CA’s Executive Director, David Randall, told me in an email that this is “a model social studies standard rather than a model curriculum.” It would basically serve as an alternative to the insidious 1619 Project, which has already been adopted in Massachusetts and Illinois. The “curriculum sketch” lists what the CA thinks should be covered at a minimum. This includes the birth of America, from the Puritans and English common law to the Revolution. Thinkers like Ben Franklin and Jonathan Edwards, but also frontiersmen like Daniel Boone. The usual Founding suspects.

One could quibble with who, and what, is included. But what’s not arguable is that this curriculum would be infinitely better than the Marxist drivel foisted on our children for years. Take a look at the CA’s website and materials. Sign up to receive info. Send it to your elected representatives, at the local and state level. Take a copy to your local school board. To paraphrase a certain famous cinematic professor: it’s time that goose-stepping morons tried learning about statues instead of toppling them. And if it’s too late for them, perhaps it’s not for their kids. Our Republic depends on it.