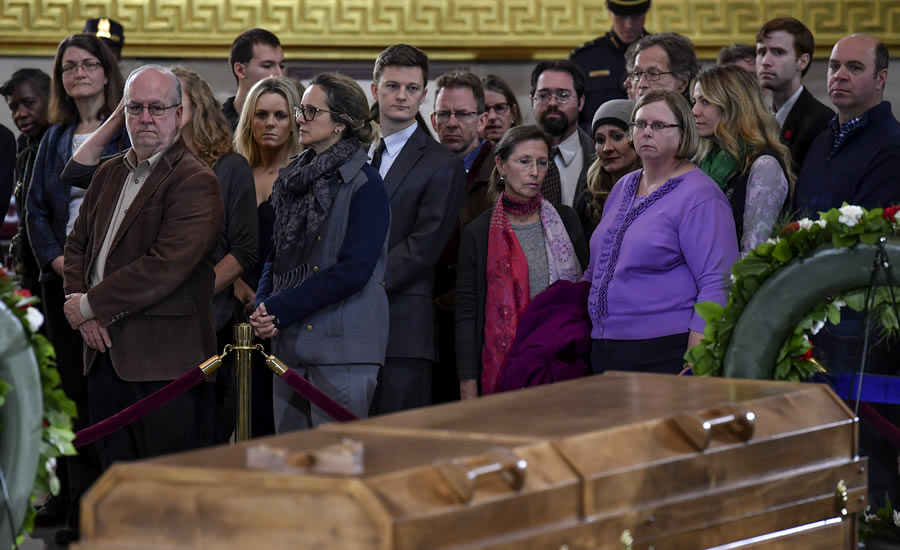 Members of the public pay their respects to the late Reverend Billy Graham as he lies in honor in the Rotunda of the U.S. Capitol on Wednesday, Feb. 28, 2018, in Washington, D.C.

Thousands of people from all walks of life gathered in unison at the U.S. Capitol building Wednesday to pay respects to the late Billy Graham.

Disciple, loving, humble, relentless, a man of the simple Gospel, one of Christ’s Generals — these are the words that people of all backgrounds and Christian theologies, from all across the U.S., used to describe Graham in recounting his legacy to The Daily Caller News Foundation while waiting to see him.

Graham is one of only four civilians to have received the honor of lying in state in the rotunda of the Capitol Building. The other three were Civil Rights activist Rosa Parks, and Capitol Police Officer Jacob J. Chestnut, Jr. and Detective John M. Gibson who died defending the Capitol building from an armed assailant in 1998. Graham’s deservance of a place among those honored civilians, and among the revered congressmen, military personnel, and 11 presidents who have also lain in state, was evident Thursday not only in the recorded history of his legacy as America’s Pastor, but also in the nature of the crowd that came to honor him.

Christian faithful of the Orthodox and Catholic churches and of various Protestant denominations traveled from near and far and lined the streets to see Graham. People of every ethnicity, some naturalized citizens and others U.S. citizens by birth, of varying political backgrounds, running the spectrum of liberal to conservative theologies, found commonality not only in a love for Christ that Graham helped to clarify in some way for each, but also in the way that they perceived Graham’s person, legacy and message — a rare feat for any figure who has spoken to both sides of any aisle.

Those who recounted to TheDCNF what Graham and his ministry meant to them spoke overwhelmingly of the simplicity of Graham’s gospel message, of his consistent integrity, and his steadfast focus on the love of Christ above all else. These things, they said, shaped the lives of millions.

A woman who identified herself to TheDCNF only as Ruth said she knew of Graham from her days working in the White House during President Richard Nixon’s administration. She recounted how Nixon preferred to have private church services instead of going out to church and that Billy Graham spoke at the one such service to which she was invited. Peggy told TheDCNF that Graham’s importance in her life was tremendous and that his legacy “only made (the country) better.”

“Because everything starts in the heart and you’ll change nothing with laws and rules and regulations. … The only way anything will change, especially in our nation today, the only thing that’s going to change is a change of heart and only God can do that. And that was his whole sermon, constantly — ‘God loves you, and Jesus is the way,’” Ruth told TheDCNF. “And I can tell you personally it works.”

Many of those who began to brave the lines in front of and through the Capitol building before noon spoke similarly to TheDCNF of their purpose for being there. They came to honor Graham, yes, but also to honor God for what He had done through the man. It was a sentiment all seemed to share. Individuals who had never before met formed large groups within the outside queues and raised their voices in hymns to God. Passerby could here snatches of “How Great Thou Art” and verses of other worship songs sung by impromptu choirs throughout the lines all day.

Only when the motley gathered faithful ushered inside did they cease to sing and instead spoke in softer tones out of reverence for the setting and for the place of honor to which they slowly drew nearer. Somehow, Graham’s legacy inspired this mixture of hushed reverence and spontaneous worship toward God as much from those whom he had never met as from those who he personally touched in life.

Graham’s consistency and passion for spreading the message of the Gospel, and the simplicity and politically neutral way with which he presented it, shaped even the lives of those who only saw him on television or heard of his ministry from others.

Alan Richardson, who traveled from Weatherford, Texas, to pay his respects to Graham, told TheDCNF that the nuns and priests in his Roman Catholic family held Graham in high esteem, and that the power of Graham’s simple presentation of the Gospel earned his respect as well.

“You know, I’ve listened to him several times on TV and it just brought such meaningful message to everybody, and he was peaceful and he…he was just a Christian. Just a pure Christian,” Richardson told TheDCNF. “He wasn’t biased to any other religion. I really gained all of the respect for him for that.”

Richardson said that of all the things Graham did, from holding massive crusades across the country and overseas to visiting with and counseling various heads of state, Graham impacted Richardson most powerfully with “just the word of the Lord. Just passing God’s message to let everybody know that God was in charge.”

“That’s really what affected me the most,” Richardson added.

Don Davidson and Roger McGee, senior pastor and worship leader respectively of First Baptist Church in Alexandria, Va., told TheDCNF that Graham largely influenced them to become the minsters they are today. Davidson and McGee never met Graham in person. They grew up watching his crusades on black and white television.

“You can’t measure his impact. It’s off the charts. I know he made a huge difference in my life. I’m probably a pastor because of his influence,” Davidson told TheDCNF.

Davidson said that a hallmark of Graham’s legacy was the unity that he fostered within the disparate parts of the body of Christ – the various schools of belief and denomination into which the church at large is separated.

Davidson also said that Graham’s avoidance of politics allowed him to keep the focus of his ministry on the story and the person of Jesus, so that “Whether you were listening to it in 1950 or 1995, it was that same message.”

Bigz Bigirwa, who currently lives in Arlington, Va., but was raised in Uganda, told TheDCNF that Graham’s message has been integral in shaping his spiritual walk and his personal identity.

“According to the man in there,” Bigirwa said, smiling and pointing to the dome of the Capitol Building, “I am a citizen of Heaven.”

Bigirwa told TheDCNF that Graham’s relentlessness and boldness in preaching Christ to the world both inspired and convicted him.

“I consider him one of Christ’s generals,” Bigirwa said.

Jared Natsis of Falls Church, Va., told TheDCNF he is studying to become a pastor at Wisconsin Lutheran Seminary. Natsis never met Graham, heard his sermons, or saw any of his televised crusades, but knew him by reputation as a minister with “a pastoral heart” who reached millions with the message of Christ’s love.

“As an aspiring pastor I admire that,” Natsis told TheDCNF.

Those who had lined up patiently outside the Capitol Building in the late morning slowly shuffled into the rotunda by mid afternoon. They gazed on Graham’s simple wooden casket, crafted by prisoners, in near silence. Graham’s son Franklin and three grandsons ringed the rotunda and greeted those who came to see their father or grandfather with handshakes, smiles, and kind words, genuinely offering comfort to the thousands of strangers who came to express their condolences. Outside, those who had finished viewing the casket exchanged contact information with people to whom they had been strangers only hours before.

Despite the divisions that so many claim dominate the current cultural climate, unity in love of Christ and respect for Graham’s legacy shone stronger among disparate peoples in the spaces and hours surrounding his honoring at the Capitol Building.

Fewer US Adults Identify Christian, More Identify as ‘Nothing in Particular,’ Surveys Show