This Week at War: Fire Down Below

From fighting fires and coronavirus to the war on terrorism, the brave men and women of the U.S. Armed Forces are risking their lives to keep us safe. 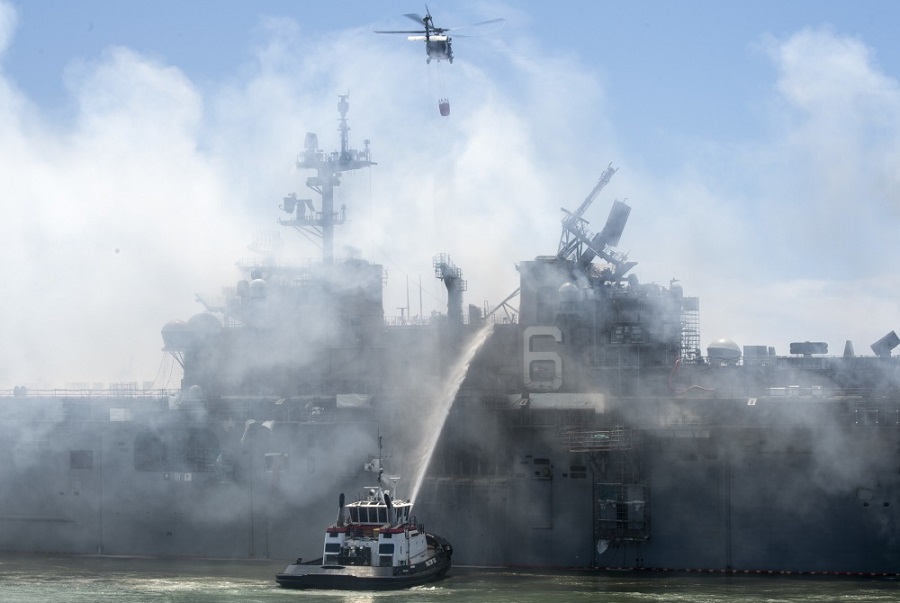 The above image looks like it was captured while at war. It was actually taken this week in San Diego, where more than 60 U.S. Navy sailors and civilians were injured during a massive fire aboard the USS Bonhomme Richard.

The fire aboard the amphibious assault ship, which started on Sunday morning, was finally extinguished on Thursday afternoon, according to a U.S. Navy statement reported by KPBS. According to the U.S. Naval Institute (USNI), more than 300 Navy and civilian firefighters were still battling the blaze as of Wednesday. They were briefly evacuated later that night, according to KGTV-TV, when “the vessel ‘naturally settled’ due to the fire and water damage and was rocking slightly to one side.” The station said that firefighters returned to the ship on Thursday morning.

USNI News reported that the ship had suffered “extensive damage” as the battle against the blaze entered its fifth day. The cause of the fire, which has resulted in injuries related to heat exhaustion and smoke inhalation, is being investigated by the Navy.

Please keep the injured, their families and all those displaced by this catastrophe in your prayers.

Another American soldier has died while serving in America’s longest war.

According to the Department of Defense, U.S. Army 1st Lt. Joseph Trent Allbaugh “died as the result of a non-combat-related incident” on Sunday in Kandahar, Afghanistan. The married 24-year-soldier hailed from Folsom, California. His death is under investigation.

“The loss of 1st Lt. Joseph Allbaugh is devastating for everyone,” said Col. Charles Matallana, as quoted by the Army Times. “On behalf of the 108th ADA Brigade, I want to extend our deepest condolences. Our thoughts are with his family, friends and fellow soldiers. We are with them during this incredibly painful time.”

As we pray for 1st Lt. Allbaugh’s wife and family, a group of National Guard airmen is headed overseas to join the fight. The below photo shows the warriors leaving Rosecrans Air National Guard Base in St. Joseph, Missouri, for their deployment to “an undisclosed location.”

Our gratitude to our nation’s courageous troops and their families is eternal. We humbly ask God to shield these airmen from danger and comfort their loved ones as they deal with the strains of a deployment during a time of war. Amen.

It’s been another busy week for thousands of U.S. service members battling COVID-19. To defend the defenseless, troops have been inspecting nursing homes, delivering badly needed supplies and even feeding the homeless.

Photo of the Day: @AZNationalGuard members helped prepare meals for the homeless in Phoenix as a part of their multi-faceted response to COVID-19. https://t.co/rvr25nQqlq #InThisTogether pic.twitter.com/X0Uc3kXent

As of Thursday, the Department of Defense said there were 18,968 confirmed military COVID-19 cases, with 7,783 recoveries, 409 hospitalizations and three deaths. We are praying for these warriors and their families as the men and women of our Armed Forces continue risking their own health to keep us safe.

Speaking of COVID-19, military homecomings are much different these days because of the pandemic. The below photo shows U.S. troops being greeted by fellow soldiers to take their temperatures while recently returning from a nine-month overseas deployment. 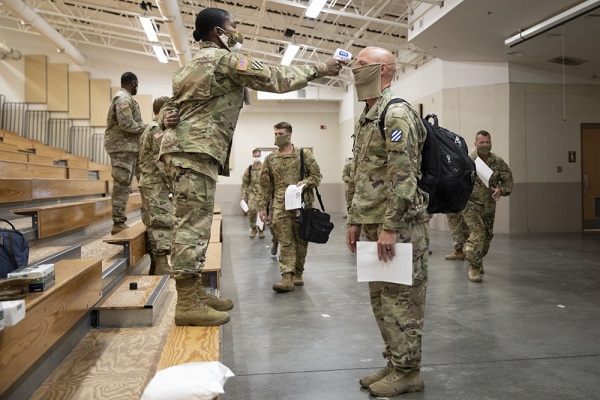 U.S. Army soldiers get their temperatures taken and go through a battery of questions to screen for COVID-19 at Hunter Army Airfield in Georgia on June 28, 2020.