The Stream's weekly look at the ongoing sacrifices of U.S. troops and military families in Afghanistan and around the world. 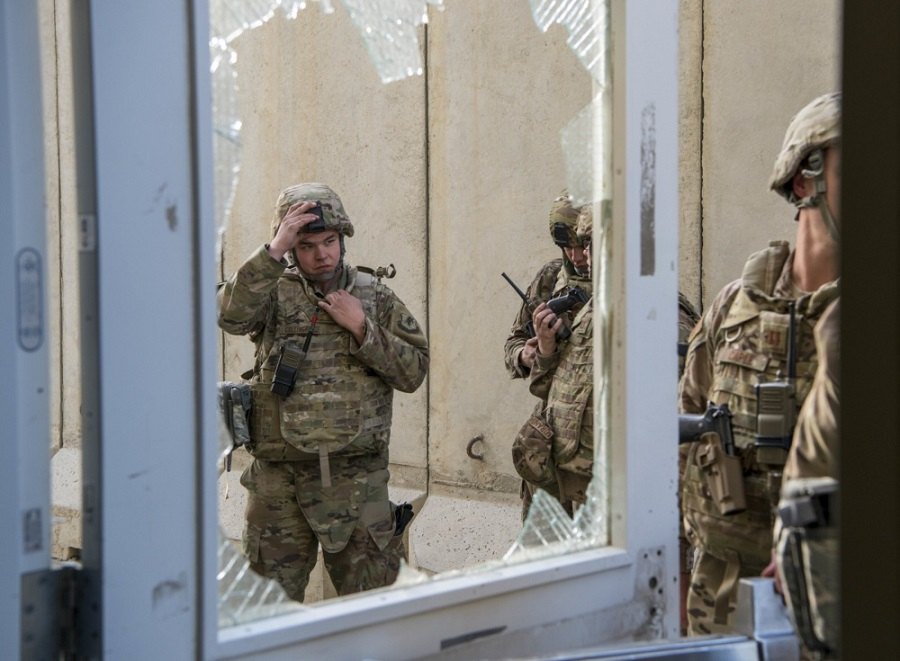 You probably didn’t see it on the news amid the ongoing impeachment circus, but American troops are still very much at war in Afghanistan.

A massive terrorist attack was foiled by brave U.S. and coalition forces on Wednesday at Bagram Airfield, the largest American military base in the combat zone. According to the Military Times, Taliban fighters “failed to breach the Bagram base, but (a) suicide bombing struck a medical facility” outside the wire, killing at least two Afghan civilians and injuring 70 others, including five Georgian troops. No U.S. military or civilian casualties were reported.

To repel the attack on Bagram, American and NATO troops wound up squaring off with enemy fighters for “nine to ten hours,” according to the report. Airstrikes were also called in, once again according to the Military Times, to help put down the assault.

“The Taliban assault occurred as U.S. and Taliban negotiators are amid peace talks to end the war,” the Military Times also noted. “The U.S. is amidst one of its heaviest bombing campaigns since the start of the conflict.”

While this week’s major attack attracted relatively scant media coverage compared to the impeachment debate, the press was all over the release of a new set of purported “Pentagon Papers” by The Washington Post.

“The war in Afghanistan has gone on for 18 years at an enormous cost in lives, injuries and money, and the public is entitled to know whether officials were straight with them about the war effort,” Washington Post editor Marty Baron wrote in an email to CNN. “Through three years of persistence by Craig Whitlock and our lawyers, the public now knows that truth was a casualty of the war from the very beginning.”

While the public does indeed deserve to know the real story of America’s longest war, the release of the “Afghanistan Papers” also prompted some swift and severe condemnations of not just the continuing U.S. military presence there, but the initial invasion itself.

The 80 percent of Americans who supported the war in Afghanistan back in 2001 were wrong. And the tiny anti-war faction that opposed the conflict was correct in warning that an invasion and occupation would turn into a bloody quagmire. https://t.co/jDPcStN171

“While reeling from a catastrophic terrorist attack in 2001, America made a decision that turned out badly,” Conor Friedersdorf wrote this week in The Atlantic. “These past 18 years should cause Americans to heed the warnings of anti-war protesters when next they raise the alarm about a war of choice.”

It’s easy to write a column from a heated or air-conditioned office about why American troops should have never entered Afghanistan. It’s even easier to quickly put your opinion on Twitter using an expensive laptop or smart phone.

What’s much more difficult is taking an in-depth, honest look at what was happening in America and around the world as the Twin Towers and Pentagon smoldered on September 12, 2001. While Friedersdorf is right that America was “reeling” after 9/11, he is completely wrong to call Afghanistan — in the immediate aftermath of nearly 3,000 Americans being murdered by foreign terrorists — “a war of choice.” Invading Afghanistan to depose the Taliban regime and hunt for Osama bin Laden, Ayman al-Zawahiri and other top al Qaeda leaders wasn’t just about revenge; it was about the safety of every single American.

In 2001, the possibility of another large-scale terrorist attack on New York, Washington, or another major American city was not a figment of anyone’s imagination. It was a clear and present danger to innocent men, women, and children of all backgrounds and beliefs. While the threat of terrorism still exists 18 years later, it’s impossible to say how the world would look without heroic U.S. troops having captured and killed thousands of terrorists since 9/11.

This point is not theoretical. I am currently writing a book about three U.S. military heroes and brothers — Jeremy, Ben, and Beau Wise — who confronted al Qaeda and the Taliban in Afghanistan after 9/11. Two of the three brothers made the ultimate sacrifice while directly engaged against the terrorist group that planned and executed the attack on our homeland. Several al Qaeda terrorists died during Jeremy and Ben’s final moments on earth.

In a moving Wednesday afternoon tweet, Afghanistan combat veteran Jack McCain, son of former prisoner of war and late U.S. Senator John McCain, cautioned against labeling the sacrifices of courageous Americans during the conflict as no longer worth it after The Washington Post report.

After reading the Afghanistan Papers part of me wants to think that all of those dust landings I insisted my pilots practice with me didn't matter, but the rest of me knows they did. Those of you that were there, those of you that fought to help Afghanistan, your work mattered.

There is nothing wrong with opposing the war in Afghanistan, but the existential threat America faced in 2001 and beyond should not be reduced or revised to fit any narrative. Both Afghanistan and America are safer because of what the incredible men and women of our military have done there. When the war should end is most certainly open for debate, but no matter how many news reports come out about what the Bush, Obama and Trump administrations did or didn’t tell the public, sending valiant U.S. troops to the country where 9/11 was planned was morally and strategically right.

Fallen heroes like the Wise brothers didn’t die in Afghanistan for nothing. They fought and bled to keep us safe. Please continue to pray for our troops, veterans and their families.