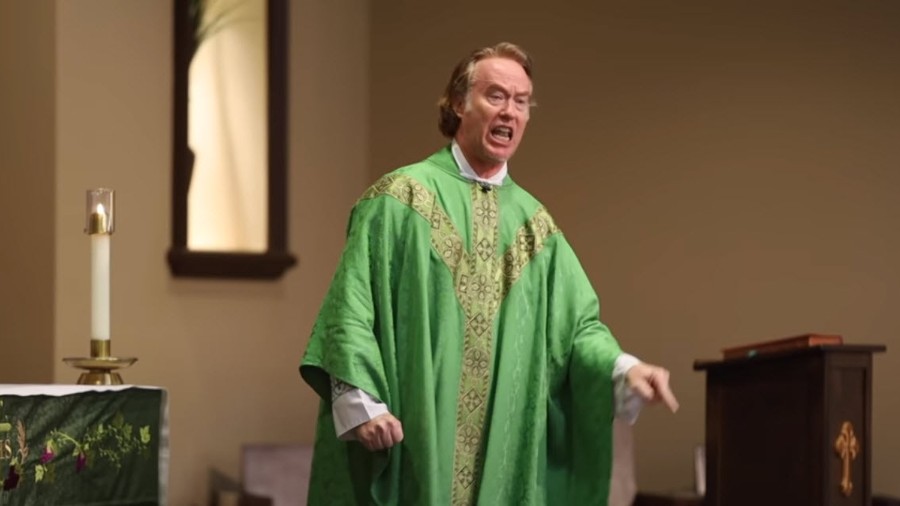 I usually hate it when people send me videos to watch. I typically don’t open them. (Sorry, online friends!)

For most of my life, I’ve been reading really quickly. So it’s painful for me to wait as the speaker … slowly … so slowly … gets to the point. Sometimes I have to fight with impatience listening to my friends face to face. Especially when I can see the point they’re driving at in the first third of their sentence, but I have to … wait until … they get … around … to it.

It doesn’t help when certain friends of mine from the South insist on telling me long, digressive stories full of details and local color and who went to Homecoming Court with whom … I want to interrupt them and shout, “Save it for a Eudora Welty story — what happens at the END???”

If I must watch a video for work purposes, I cheat and try to see if there’s a printed transcript. That way I can wolf down a Trump speech or Pope Francis statement in 90 seconds instead of 10 or 15 minutes.

A Sermon for the Next Great Awakening

But when James Robison sent me one video recently, I was glad it didn’t have a transcript. I wouldn’t have missed this delivery, or the speaker’s honest passion, for anything in the world. Robison’s comments on the video promised a lot: “If all pastors and priests would preach with courage, conviction, and compassion like this we would witness the next Great Awakening.”

And I think he’s right. The sermon is by a Catholic priest of the kind I see too rarely in recent years. The seminaries seem designed to weed out men who burn with white heat for the Gospel, in favor of 40-watt lavender bulbs that are strictly for decoration. But Father William Kosco here blazes forth like a surgical lamp, so strong that it hurts your eyes. And the light shines from within him, out of fervent depths of faith. Pray for his protection against Catholic bishops, foreign and domestic.

Why Does Biden Believe that Life Is Cheap or Evil?

The sermon concerns Joe Biden, the most powerful man on earth, who belongs to the largest Christian church in the world, and his stance on the most central question any human being could ask. Is life … good? Is it worth living? Has God’s goodness been shared in the form of existence on this earth with every single person, whom we must therefore respect and defend?

Or not? Is life just barely tolerable, under certain narrow conditions? Is one of those conditions that we can have sex whenever we want, and dodge the predictable consequence, at the cost of a human life?

Because that is what the pro-choice position holds. That life itself isn’t sacred, because nothing really is. But for the sake of argument — of making political arguments — we’ll pretend that one thing is. The faculty of choice, the assertion of our own wills, our power to say “Non serviam.” That’s what we’ll hold in awe. We’ll gild it and prop it up on marble altars, burn incense in front of it, and kill anyone who touches the Holy of Holies … our power to live out our whims. To “affirm our own truths.” To dispose of inconvenient unborn babies. To change from one sex to another. To avoid suffering at any cost, even that of assisted suicide, being euthanized like a shelter pet.

Fr. Kosco isn’t talking politics, but the value of human existence. Nor does he focus only on Biden. Instead he makes an anguished call to any fellow Catholic who considers himself pro-choice. His message is compassionate but blunt: Why do you bother? Why come to our church, when you reject its central message?

That’s right, the goodness and sacredness of life lie at the very heart of the Bible, and all that we draw from it. Because if life isn’t good, then God isn’t either — at least, He’s not good to us. If life is a relative value, a dubious proposition, made only tolerable if we can turn it inside out and even end it whenever we will, then the God who dropped us into it isn’t really our friend. He might as well not exist. So we’ll act as if He didn’t.

Do We Side with Satan?

At one point, Fr. Kosco made a claim that initially shocked me, but which on reflection is apt. He said that Satan himself could stand up at Mass and recite the Nicene Creed. Just as pro-choice Catholics like Joe Biden do. The Enemy knows that every detail of the Creed is simply a cold, hard fact. Demons believe, but tremble. They recognized Christ on earth, which is why they fled with the Gadarene pigs to the sea. They see with clear, icy eyes all the truths of the Christian faith, and the arc of human existence. They just hate it, and want to end it. They want us to hate it, too.

So someone who claims to be Christian, but holds life as cheap, isn’t a “dissenter” or “liberal Christian.” He doesn’t have faith at all. Instead he has bitter suspicions that the entire Creed is true, but that it’s a black, snuff farce into which we were forced by a cruel and arbitrary Father. The kind of Father who deserves that we rebel against Him. As Satan did at the beginning.

For Catholic bishops to be smiling and welcoming Biden as our president isn’t just a craven compromise by which they hope to keep all their federal funding, as I suspected. It’s an act of mass apostasy, of literally switching sides and viewing human life as Satan does. It’s shepherds becoming werewolves.

Okay, now that you’ve quickly skimmed through my remarks, please go to watch Fr. Kosco in full. It’s worth every single second of its 30 minutes.