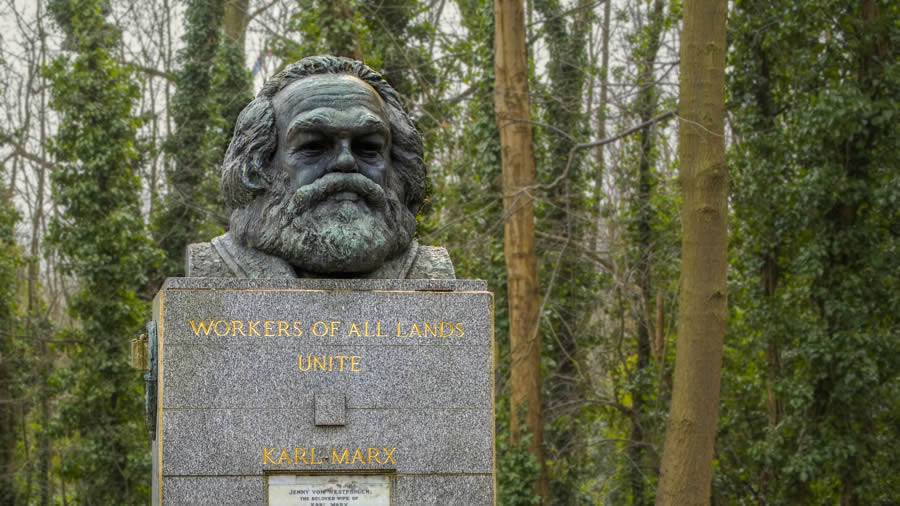 The tombstone of Karl Marx is seen in London.

Patrisse Cullors, one of the founders of Black Lives Matters, admitted in a newly surfaced video from 2015 that she and other BLM organizers are “trained Marxists.” Most Marxists are not this forthcoming. Who trained them? Why are so many younger Americans positive toward socialism? When did this ideology reach our shores and schools?

The Marxists Were Waiting

In their late teens and early twenties, the men of the Greatest Generation left our shores to fight evil ideologies spawned by wicked men. Young American ladies bought work boots and filled factories building planes, tanks and warships. They saved the world!

As WWII ended, Johnny came marching home to marry, raise a family, build thousands of family-owned businesses, farms, and ever-expanding corporations. They saw the first president in history be baptized while in office. They witnessed the rise of a great evangelist fanning the flame of the Gospel. Church attendance was at an all-time high. Most families had a father and mother as divorce was rare. America was far from perfect, but she was getting better.

Although wise beyond their years, the Greatest Generation was far less educated compared to succeeding American generations, but they wanted their children educated. Colleges and universities soon swelled their enrollments with Baby Boomers and later generations.

The Ideology and Its Teachers

Fleeing Hitler’s Germany before and after WWII, a group of German philosophers and educators planted the seeds of this ideology into our American university system. Men like Georg Lukacs, Herbert Marcuse, and Theodor Adorno, of the Frankfurt School in Germany, were trained to translate the ideology of Marxism from economic terms into practical cultural terms. This new revolution would not promote bullets, bombs, and bloodshed in the beginning but seek to smash religion (Christianity in particular), morals, authority, and American patriotism.

Marxist theorist Antonio Gramsci saw the 2000-year impact of Christianity on the West and concluded that this de-Christianization would begin with a “long march” through the cultural structures of societies. Things like religion, family, media, and education must be turned upside down and radically transformed.

New meanings and definitions would be given to language, history, and social theory as this new agenda to radically transform America was launched. In identifying the cultural hegemony or power structure, the white Christian was considered the ruling majority and oppressor. All other groups would be deemed a minority.

Politicians, professors, activists, and community organizers found power and social traction in organizing and promising each minority group certain rights, privileges, benefits, etc. They knew it would be a long road as cultural change worked its way through the institutions of government, education, corporations, sports, music, entertainment, and the Christian church.

In deconstructing America from a capitalist free market economy and Judeo-Christian moral foundation, the virtues and values that made America strong must be attacked, eroded, shamed and destroyed. The new storytellers of change must lift high the “oppressed” and decry the “oppressors.” Nagging new narratives must grate and goad, thus promoting change. Progressive theologians and liberal pastors must continue to blur the Bible, thereby adding to moral confusion. Universities must churn out revolutionaries and reactionaries — even those willing to use deception and violence. The willing media must help make “examples” of hypocrites, racists, homophobes, Islamophobes, etc. An undercurrent of fear prevents many patriotic, religious, and traditionally-minded people from speaking out and standing up.

Wherever the disruptive ideology relating to Marxism has found root, only suffering, chaos, and carnage is left in the wake of that wave. Socialism’s totalitarian control has been the biggest producer of poverty in human history! Its promise of “equality” has resulted in average citizens being equal in their poverty while the ruling class enjoys power, position and prosperity. In the 20th century alone, 150 million people were killed because of this ideology.

Venezuela is a recent example of a once vibrant economy to collapse into a bottomless recession with starving citizens standing in long lines surrounded by armed robbers and thugs. This is the outcome of the leftist leadership of Hugo Chávez followed by Nicolás Maduro.

How Do You Recognize a Marxist?

Dr. Emir Caner is president of Truett McConnell University, a fast-growing Christian school nestled in the mountains of Northeast Georgia. He shares ten practical tips in “How to Spot a Marxist at Your College or Seminary”:

2. Censorship of thought over freedom of speech

Thank you, Dr. Caner, for this extremely helpful list, because Marxists are still waiting for our young people in state and secular institutions of higher learning.

By the way, President Dwight Eisenhower was the first and only president to be baptized while in office.

Ron F. Hale is a freelance writer, retired pastor and serves as an interim pastor and guest preacher when invited. Ron has written a chapter in the newly released book, The Right to Believe, published by Vide Press and edited by Tom Freiling.

Originally published at The Christian Post. Reprinted with permission.