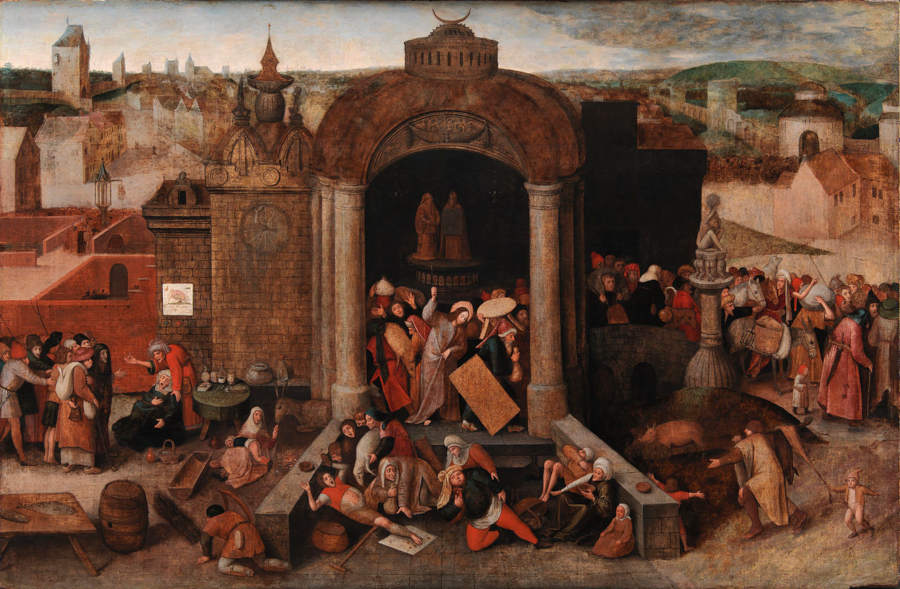 Tuesday I wrote about the Catholics in Rome who entered the historic church where a pagan idol of the fertility goddess Pachamama had been enshrined by Vatican officials. And removed them. And in a Roman custom typically saved for the corpses of hated tyrants or popes, tossed them in the Tiber.

These baptized believers weren’t just offended by the cheesy pagan carvings. (I’m told they are sold by the thousands as tourist trinkets in South America.) Nor only by their presence on the same altar that houses the Eucharist. These Catholics were reacting to the pagan worship offered these idols at a ceremony where Pope Francis presided. At the pantheist neo-paganism served up at the Amazon Synod. And at the notion that “primitives” communing with spirits in the forest gain thereby some divine revelation akin to Mt. Sinai’s or the Sermon on the Mount.

That claim is part of an ideology growing all across South America. Hard leftists like Bolivia’s Evo Morales, and sympathetic priests, are using this paganism for politics. Conjured from the dry, lifeless corpse of Liberation Theology, which has driven millions of Catholics to join Pentecostalist churches.

By invoking these pagan gods and goddesses, whose worship had almost vanished, these activists did something special. They gave their dialectical materialism a spirit. Perhaps quite a few them. (“My name is Legion.”)

The goddess Pachamama can put an indigenous face on the German ideology that is Marxism. It puts a campesino’s hat on the Ford Foundation’s ecological imperialism. Perhaps these deities themselves (who of course are demons) have embodied the dead hulk of failed Communism and given it life, like a zombie.

And it wants to eat our brains. To replace both faith and reason with something else that is neither. A hybrid of fuzzy, undisciplined thinking and forced, artificial emotions, it all sounds like it was produced by online bots. Or some vast, pneumatic B.S. Generator housed in the Vatican’s basement.

Clerics around the world are simply terrified by one thing. That’s the spectacle of Catholic laymen doing anything except lying down and taking the punishment.

Try to read the documents that guide the Amazon Synod. No really, I challenge you. Try. Or to slog through one of Pope Francis’ official statements. The genuinely courageous can try to read one of his books. I served as an English language editor on Francis’ first book in English. I valiantly tried to read the thing, but finally couldn’t. It didn’t make me think. In fact, it made thinking almost impossible for hours afterward. All I came away with was the distinct whiff of brimstone.

Among frustrated, confused, and deeply frightened Catholics around the world, the Tibering of the Idols struck a nerve. You can see it all over social media, the faint stirring of hope against a background of learned helplessness. The hope for rescue of a child abused too long. As I tried to express things on Twitter:

For 60 years, Catholics have been lied to, manipulated, bullied, fleeced, molested, and misled by their shepherds. I’m shocked that there’s still the tiniest trace of docility among Catholic laymen nowadays. It seems … servile, frankly. The idols in the Tiber gave me hope.

Not everyone agrees. Of course all the papal Stalinists, mediocre opportunists, and convinced Catholic Jacobins were outraged. On cue, they all screamed “racism” and “xenophobia,” yadda yadda, like some sullen teenager whose parents demand that he finally change his sheets.

These people want the Italian police to hunt down the “thieves” and the Vatican to press charges. I certainly hope that happens. The trial would make the men heroes, and expose to the very bottom this Synod’s callousness and cruelty.

More troubling to me? Those who seem actually to object to the Synod’s neopagan agenda, but still couldn’t defend this act of zealous Catholic laymen. The Catholic News Agency called the laymen’s action “stealing.” Bishop Rick Stika was outraged. Frankly, I think that clerics around the world are simply terrified by one thing. That’s the spectacle of Catholic laymen doing anything except lying down and taking the punishment dished out by our shepherds. This simple act of piety was deeply ominous, like the very first stirrings of a slave revolt.

As I observed yesterday:

The “Idols in the Tiber” incident is the bright red line. If you DISAPPROVE of dunking those fetishes, you value obedience and good bourgeois order (property rights!!!) over Truth. Period. You might as well go whole hog and worship Pachamama yourself. https://t.co/JAb5Uxs3VJ

Paying Recompense for the Temple

But perhaps I’m being too harsh. Maybe I need to appreciate the perspective of those who admit Pachamama was a pagan idol with no place on the altar. But still object to removing it. Because, you know, of good public order. Or obedience. Or something.

For these people’s sake, I’d like to point out a neglected passage in Chapter 21 of Matthew. We all know the following story, one of Jesus’ first actions after His triumphant entry into Jerusalem.

And Jesus went into the temple of God, and cast out all them that sold and bought in the temple, and overthrew the tables of the moneychangers, and the seats of them that sold doves, and said unto them, “It is written, My house shall be called the house of prayer; but ye have made it a den of thieves.”

That’s all fine and dandy, of course. But how many of us remember the very next event?

And thereafter, Judas betook himself unto the Temple. He brought with him the bags of coin he kept for the apostles. And Judas besought the moneychangers, and sellers of bird and beast, whom Jesus had molested. Judas questioned them, “How much hast thou lost in trade? In capital damages?” And they gave him answer, and he repaid them their every loss, down to the very last penny.

And Jesus, hearing tell of this, praised Judas, saying: “Thou hast done well, for I lost my head back there, and injured those honest tradesmen.

Now I tell thee, Judas, thou art the rock, and on this rock I shall found my church.”

That passage might not be in your Bible. But it has been restored in the upcoming Amazon Synod Edition, along with several chapters about Pachomama added to Genesis. The Judases who support the veneration of pagan idols, and the Peters who shrug and waffle over and over when confronted by such evil, will surely make it available in paperback and on Kindle.