The Significance of a Small Sacrifice 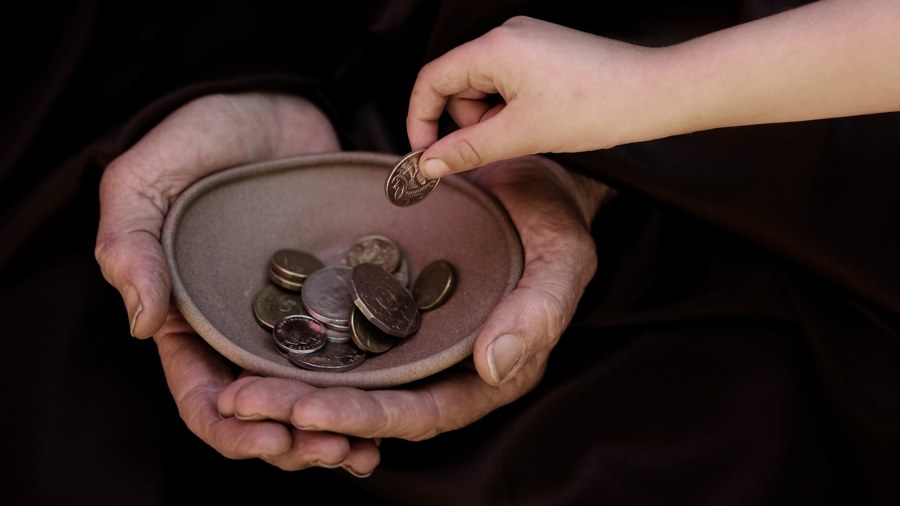 Did you hear about the boy who took off his favorite bow tie during the church service and put it in the offering plate? When his dad asked him why he had done such a thing, the youngster replied, “Don’t you know? The pastor tells us to put our ties and offerings into the plate.”

Oh, to have the heart of a child! If the Lord needs it, we’ll give it at once. We should be glad to offer the Lord whatever He needs, whenever He needs it, for the expansion of His Kingdom. He delights in our gifts to Him, whether much or little.

Sometimes our little seems precious little, with the emphasis on precious. But our small gifts, sincerely given, accomplish much, as we learn from two widows, one in the Old Testament and the other in the New.

In 1 Kings 17:8-16, the prophet Elijah suffered from food insecurity during a time of drought and famine. The Lord told him to go to the town of Zarephath. “See, I have commanded a widow there to provide for you” (verse 9). Arriving there, Elijah sought out the woman and her son, who were down to their last meal. At Elijah’s request (and because God had prepared her heart), she made bread for him with her final cup of flour and oil and then made some for herself and her son.

From that moment until the famine ended, her flour bin was filled, and her oil pot never ran dry. She gave her precious little to the Lord, and see how He blessed it! Just a handful of flour and a bit of oil, yet we’re still reading the story and relishing its lessons as though the bread were still warm on the hearth.

We read about the other widow in Mark 12 when Jesus “sat down near the collection box in the temple and watched as the crowds dropped in their money” (verse 41).

Temple officials kept 13 trumpet-shaped collection receptacles against the wall of the court of the women, which was accessible to everyone. The Passover crowds deposited their offerings there, and some undoubtedly made a show of it. Jesus watched everyone with interest.

“Then a poor widow came and dropped in two small coins” (verse 42).

The Greek term was lepta, which was the smallest bronze Jewish coin in circulation. In the older translations, lepta is translated as the widow’s “mite.”

Jesus called his disciples to him and said, ‘I tell you the truth, this poor widow has given more than all the others who are making contributions. For they gave a tiny part of their surplus, but she, poor as she is, has given everything she had to live on’ (verses 43-44).

Notice she had two coins. She could have given one to the Lord and kept the other for herself. But the Lord nudged her heart to give all, and she was responsive to the prompting. Someone once said, “She gave with all her mite.”

It has also been said, “The widow’s mite became the widow’s might.” I agree. With that small gift, she went down in the Gospel records as a giant in the eyes of Jesus, someone who was unafraid to give small gifts even at a sacrifice. She probably never knew how Jesus watched her and used her until she met Him in heaven. Her precious little teaches us the significance of sacrifice.

When we give with sacrificial sincerity, God opens the windows of heaven to bless us (Malachi 3:10). He is overjoyed with small gifts, sacrificially given, prayerfully offered, and joyfully rendered to Him as an act of worship. Every husband and wife know that a small, unexpected gift, chosen in love and offered spontaneously, is often more precious than the big gifts that come at Christmas. A handwritten note is sometimes a more valuable piece of paper than a hundred dollar bill. A child’s loving drawing with crayons and construction paper might be more precious to you than a Picasso.

Let’s get really practical. The first dime your child or grandchild puts into the offering plate as a tithe of his or her allowance is a greater gift than we can imagine because it’s the first installment of a lifelong habit that will multiply thousands of times over.

Even if your gifts are small, give them regularly. Mark doesn’t tell us what happened to the widow Jesus saw in the temple, but I suspect she came back the next week with two more mites. And the next week. And I have no doubt God provided her needs, just as He did for the widow of Zarephath and her never-ceasing cruse of oil.

Let me ask you a question I’ve often thought about during my years of ministry. If you were the pastor of a church or the head of a ministry, would you rather have a million-dollar gift from one donor or one million donors who gave one dollar each? The answer is easy. If it’s a matter of either/or, you want a million people believing in what God is doing through His church or organization and giving on a regular basis, even if it’s only a dollar a week. As a pastor, I’ve always been thankful for major gifts — huge amounts that enable us to expand our work — but the typical church or organization will tell you that nearly ninety percent of their income involves people who may never be able to give a huge amount all at once.

The world has been changed by the Gospel in a million ways because of two millennia of people regularly giving their precious little. As the hymn says, “Little is much when God is in it.” Think of the little boy’s lunch Jesus blessed, the five smooth stones David chose from the brook, the tiny sparrows that became illustrations of the care of God, the rough staff in the hand of Moses, and the tiny hairs of our head that are all numbered by the Lord.

You’ve probably never heard of Hattie Wiatt. She was a little girl who tried to go to Grace Baptist Church in Philadelphia. The place was packed, and she had trouble finding room until the pastor intervened and made sure she always had a seat.

After Hattie became ill and passed away, her mother found 57 pennies and a note explaining it was “To help build the church bigger, so more children can go to Sunday School.” When the pastor, Dr. Russell Conwell, told the church of the little girl’s sacrificial gift, the whole community rallied to raise the money and build the needed buildings, which later included a university and a hospital.

If you have much, don’t hesitate to give in ways small and large. If you have but a precious little, don’t be afraid to offer it to the Lord.

Give Him your two cents worth. He’ll open the windows of heaven and pour out more blessings than you can receive.

Dr. David Jeremiah is among the best known Christian leaders in the world. He serves as senior pastor of Shadow Mountain Community Church in El Cajon, California and is the founder and host of Turning Point. Turning Point‘s 30-minute radio program is heard on more than 2,200 radio stations daily. A New York Times bestselling author and Gold Medallion winner, he has written more than 50 books.

Christians Understand the Depth of Love Behind the Ultimate Sacrifice

A Family is Waiting for You