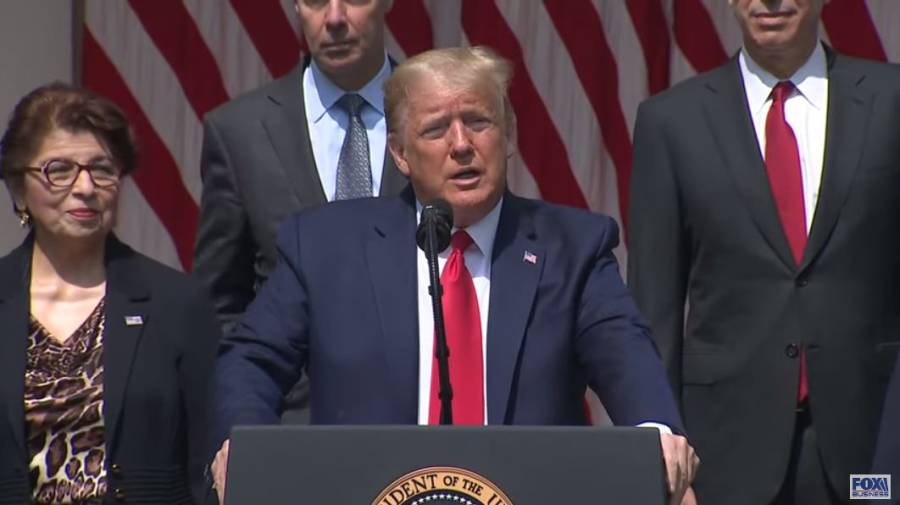 Last Friday, in the midst of this tinderbox of a crisis, many major media outlets and Democratic leaders did something so reprehensible, so malicious, so dangerous, it can only be called demonic.

The President Celebrates a “Great Day” of Equality

During a Rose Garden appearance touting the surprising employment numbers, President Trump veered off onto the topic de jour: Equality. In his brief soliloquy on equal justice and fairness, he evoked George Floyd, expressing hope Floyd was happy at seeing the issue of equality being addressed. That such discussions made it a “great day.” The President was speaking a tone of unity, preaching what MLK preached.

The video could not be clearer. Trump was specifically talking about justice, about equal protection under the law. The “great day” was the light being shown on it.

Here is the transcript from The Hill. Kudos to them for playing it straight.

“Equal justice under the law must mean every American receives equal treatment in every encounter with law enforcement regardless of race, color, gender or creed,” Trump said. “They have to receive fair treatment from law enforcement.”

“We all saw what happened last week. We can’t let that happen,” he continued, referencing Floyd’s death.

His message couldn’t be more clear had he painted it in 30-foot tall letters on Pennsylvania Avenue.

Remember the president had gone off-script and shared his thoughts off the top of his head. Then he went back to his script. (Here is a transcript of the whole address, made from uncorrected close captions.) What did he say? “I want to finish by saying.” He’d finished talking about George Floyd and moved on to his next point. That was about “saving the economy.” Which was the subject of the entire press conference. He couldn’t have been clearer about that.

And yet, nearly every major outlet blasted out the headline that Trump said George Floyd was looking down from heaven happy at the jobs report. The New York Times, CNN’s Jake Tapper, Yahoo News, a  host of others. The horror. How dare Trump use Floyd!

Joe Biden and Kamala Harris picked up the false report and expressed their outrage. Biden called it “despicable.” This continued through the weekend. Atlanta’s Mayor Keisha Lance Bottoms repeated the line on CNN Sunday morning.

It is a lie. A flat out, indefensible invention. Their aim was simple: Bury Trump’s message of unity and equality. And with the nation poised to explode again in violence over Floyd’s death, depict the President as using Floyd. Theirs is a deliberate effort to inflame an already volatile situation. They poured gasoline all across our streets.

We saw (or didn’t see) Twitter and Facebook take a similar action. No, they did not invent a lie about Trump. However, they killed a video from the Trump campaign. It features the President’s (ignored) speech last Saturday at the NASA SpaceX launch, where Trump paid tribute to Floyd and expressed solidarity with peaceful protests. Twitter and Facebook took it down due to a “copyright complaint.” Yup. By any means necessary, eh?

The Trump Campaign said Twitter is  “censoring this uplifting and unifying message from President Trump after the #GeorgeFloyd tragedy. The same speech the media refused to cover.”

The Second Law of Snake News

Last week, I wrote about the First Law of Snake News: Anything that has the media and Democrats hyperventilating over concerning Trump will be proven false. The First Law’s corollary is “And this proof will usually happen within 24 hours.”  The story of Trump evoking George Floyd is a proof of the First Law.

And now we get to the The Second Law of Snake News: The Media Will Stoop to Anything to Injure Trump.

Further proof came Sunday morning, when Attorney General William Barr was being grilled on Face the Nation by Margaret Brennan. Barr kept insisting that figures in the administration agreed the Insurrection Act should only be used as a last resort.

To contradict Barr, Brennan included a cut of Defense Secretary Mike Esper  saying he didn’t agree the Insurrection Act should be used. CBS deliberately cut out Esper saying “only as a matter of last resort.” (To hear everything Esper said on this, go to 2:50 on this video of his press conference.) He also said troops should be used as law enforcement “only in the most urgent and dire of situations.” He added: “We are not in one of those situations now.” (For the record, this was Trump’s position as well. He just didn’t want Esper taking it off the table while he pushed majors and governors to act.) g

This came less than a month after Chuck Todd of NBC’s Meet the Press was forced to apologize for deceptively editing Barr’s interview with Catherine Herridge. Herridge had asked how he thought history would judge the decision to drop charges against Lt. Gen. Michael Flynn. Todd showed the clip up through where Barr smiles and says, “History is written by the winners, so it largely depends on who is writing the history.” Todd bashed that answer, saying Barr was as much as admitting the decision was political and had nothing to with upholding the law. Orange Man’s Attorney General Bad!

Except Barr had gone onto say, “I think a fair history would say it was a good decision because it upheld the rule of law.”  Yup. Precisely what Todd insisted he didn’t say.

The Second Law and The New York Times

Over the weekend, The New York Times axed Editorial Page Editor John Bennett. His crime? He allowed the paper to publish an op-ed from Republican Sen. Tom Cotton. Snowflake staffers had a hissy fit. And Bennett was tossed onto the looted streets of the Big Apple.

No less than Sean Ono Lennon — son of John Lennon and Yoko Ono — spelled out what a dreadful moment this is for journalism.

This is the end for you guys. Firing someone for allowing different opinions in your paper means you are no longer a real news paper. It’s been fun. You had a good run. The best in fact. R.I.P. 🙏 https://t.co/yAcXpXKyFL

If The New York Times can’t even have diverse opinions on its opinion page, how can you trust its “straight” news coverage?

What news writer or columnist, should there even be any willing to be fair, will dare type a single sentence that shows Trump in positive light? They’d be doxxed and dispatched in a New York minute.

We got our first real glimpse of NYT‘s fatal disease last August when they changed a simple, neutral fact-based headline because the woke police protested. They did it again last week. The disease is more contagious than COVID-19 and is infecting newsrooms far beyond the Grey Lady. (Or should we call it, the Yellow Lady.)

What does this all mean? The lesson is that between now and Election Day any story from the mainstream media naming Trump must be presumed false until proven otherwise. Check original sources. Check the new media.

It must also be assumed that any message of Trump’s that goes counter to the media narrative of Orange Man Bad will be either ignored or censored on social media. Anyone spreading such positive messages will be harassed and/or blocked. (It’s a given they’ll be labeled a racist.)

It must also be assumed that any figure connected to journalism who offers a fact or opinion counter to the media narrative will soon be on the street. Or be met with hellfire.

The marketplace of ideas is being looted and burned. But isn’t that always the way with fascists.