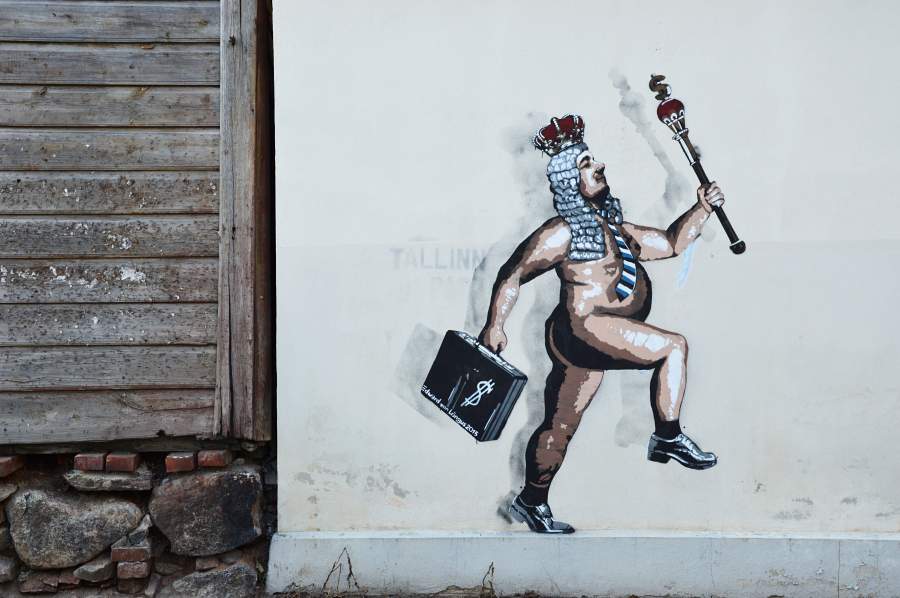 At the sight of tattooed, horned men loping around the US Capitol, and some jester squatting in Speaker Pelosi’s chair, it would take a man with a heart of stone to witness it all without laughing. To paraphrase Oscar Wilde.

Wait. What did Zmirak just say? Doesn’t he realize that a bunch of goons getting rowdy in the people’s own house is The Worst Thing Ever to Happen in America? That it discredits populism, Donald Trump, and the Christian credentials of every person who ever supported him? That it proves all the shrinking violets of the NeverTrump sorority Beta Dogma Stigma were right to snipe at everything Trump did from beneath their pink velvet fainting couch for the past four years? That in fact, it’s evidence of terrorism, as Joe Biden just claimed?

Never mind all that shrieking and preening. There was real tragedy at our nation’s capital. Just as in ancient Greece, the comedies honoring the horned god Dionysus were flanked by tragic tales. Dramas where the good and the great got destroyed.

First and foremost, of course, was the needless death of USAF veteran Ashli Babbitt. From the video available and eyewitness testimony, she was unarmed and posed no threat to anyone. If she’d been a sexual assault suspect like Jacob Blake who wielded a knife at police, her death might have caused the burning of cities. Democrat mayors would shrug at the violence, and CNN describe it as “mostly peaceful.” Her parents might be lobbying even now to speak before Congress, as Blake’s shameless clan is doing. They will likely get what they demand.

But Babbitt served her country instead of sexually violating someone, and got carried away in protesting election fraud. So she is dead and it’s all her fault. Except for the fault that can be smeared all over Donald Trump, of course. And onto you and me. “If you people were more compliant, we wouldn’t need to keep shooting you” should replace “In God We Trust” on American money. Maybe under the Bidenist Occupational Government, it will. That would at least have the merit of candor.

Your Ballot Is Now Zimbabwean Money

But there’s a broader and deeper tragedy too. Half a country has lost faith in its power to enact peaceful change, or defend its rights under law. I was raised to see our ballots as somehow sacred, our share in the sovereignty which God grants the government. We are now learning to view them as Zimbabwean $20 billion notes, which may or may not buy a loaf of bread by the time you get to the bread line.

Hundreds of thousands of citizens whose media lie to them, who fear that their votes were thrown away, or canceled out by fake votes, whose own party has largely abandoned them, peacefully marched in Washington. What were they hoping would happen? Their faces were mostly bright and full of faith. Did they really think Mike Pence, who sold out religious liberty for Christians in Indiana at the first hint of LGBT outrage, would do his constitutional duty? The thought makes me sad. God bless them, they believed America’s press release.

Our efforts to demand an honest election were thwarted at every turn, like a hero in a Sophocles play trying to dodge his own destruction. The Deep State, like the Fates, slams the door and nails shut the window, then sits back and mocks its victims as they scramble. But to us that poignant spectacle of Americans defending their votes should evoke both terror and pity. For our countrymen and our families.

Pay No Attention to the Deep State Behind the Curtain

Back to the laughter. (“Indelible in the hippocampus is the laughter,” as famous perjurer Christine Blasey Ford once squeaked, in her fake baby voice.) When I saw those goofballs (perhaps mixed with Antifa provocateurs) break into the Capitol, my first reaction was not hysterical outrage. I wasn’t detached enough to think, “This is bad PR. David French will be kissing this video on his mauve iPhone right up through his last dying breath.” I didn’t foolishly think, “Maybe we can stop the Steal by force, via a couple dozen unarmed citizens taking selfies.”

No, I felt a certain anxiety and excitement, as you do when a secret’s exposed. In this case, the secret was, “The Republic has no clothes!” A government founded on free and fair votes of the people loses its legitimacy when the vote is profoundly corrupted. When its institutions collude to perpetuate the fraud. The Capitol loses its sacral quality, and becomes just a big pretentious building, like Caesar’s Palace in Vegas. Seeing some fool clown around in Pelosi’s chair was, in that sense, the perfect symbol of the joke that democracy becomes under such conditions.

Laugh Them to Scorn

Just so, the Emperor and his courtiers in the fairy tale were outraged when some feckless child announced he was naked. In the story, the people laughed the ruler and his flatterers to scorn. That’s what we should do too, and especially laugh at “conservatives” who treat “the assault on the Capitol” as something like Kristallnacht.

But then we must mourn the dead: Ashli Babbitt, and our democracy which she served in uniform. We at least know that Ashli will rise someday.