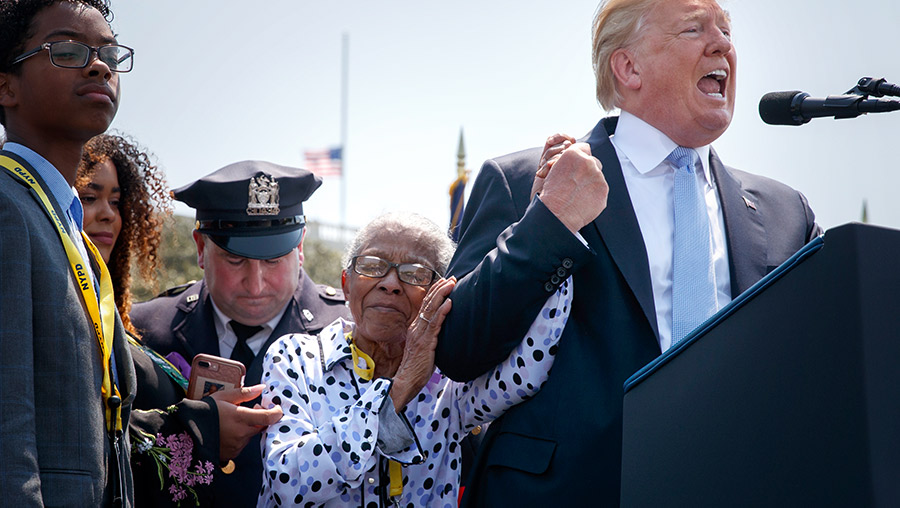 May 13, 2017. A predominantly black choir sits dejected. They had been rehearsing for weeks to sing for their school’s commencement speaker. Except when their big moment came, the music player failed. The program had to move on. They would not be able to sing.

A few hours pass. The choir is long forgotten by the stadium-sized crowd. “Pomp and Circumstance” has played over and over so often it seems as if there are no other songs in the entire universe. The ceremony is set to wrap up. The commencement speaker has to be at the airport and wheels up in very short order.

Suddenly, the commencement speaker leans over to the school president, who looks a bit startled. The university president gets up and announces the speaker is insisting the choir get another chance to sing.

The choir gleefully scampers to their spot in the corner of the end zone. This time the music roars to life. The joyful noise of gospel fill the stadium. But the speaker is not done. He grabs the arm of the school president and drags him off the stage and down to field level so they can clap along with the choir up close.

This time it’s the Secret Service who looks startled.

President Trump has held up his departure from Liberty University in order to honor this almost entirely black choir. When the song ends, several of the singers run to the speaker, tug him into the center of the choir for photos and exuberant selfies.

May 15, 2018. President Trump is hailing NYPD officer Miosotis Familia as a hero. Officer Familia had been ambushed and executed, one of the series of targeted cop killings stemming from the Left’s war on police. As Trump speaks, Familia’s elderly mother clings to the President for comfort.

Donald Trump sure stinks at being a racist.

These scenes spring to mind as the mainstream media and political opposition renew their mantra that “Trump is a racist.” It’s been one of their favorites since he started running for president.

CNN’s holding forums about it. New Jersey Senator Bob Menendez took time off from exploiting underage hookers in foreign lands to tweet about it. Hollywood, which spent decades incapable of nominating an African-American for an Oscar, rides the “Trump’s a racist” train like its an attraction at Disneyland.

“The Resistance” fills Facebook and Twitter with the same song … after spending eight years singing the praises of a president who played racial division the way Jimi Hendrix played the guitar. With genius, ear-piercing volume and lots of distortion.

What started this latest round of “Trump’s a Racist”? One of his typical tweets. The president sent out a tweet Saturday knocking the intelligence of CNN’s Don Lemon and LeBron James.

Lebron James was just interviewed by the dumbest man on television, Don Lemon. He made Lebron look smart, which isn’t easy to do. I like Mike!

That’s racist? How? We may not like it, but how many times a day does Trump call someone or something dumb or stupid? He does not discriminate in insulting people’s intelligence. Everyone gets it. If I had a dollar for every time Trump called someone dumb or stupid, I could afford Lebron’s new contract with the Lakers.

But notice a funny thing. In the very same tweet Trump says “I like Mike.” Meaning Michael Jordan, who at last check is … black. So maybe he’s not racist, maybe he’s just mad at James and Lemon. And in 2015, Trump gave James the greatest compliment in Trump world: “Lebron is a tough competitor who delivers under pressure.”

News stories and commentaries about the tweet were almost all in unison: “The same week Lebron James opened a school for at-risk youths, Donald Trump attacked the intelligence of the basketball great.”

Sure. The President’s timing made it easy for critics. James’ “I Promise” school hits nothing but net. But the story could just as easily been this:

“The same week Donald Trump sat down with a group of African-American pastors from across the political spectrum to continue working on prison reform and urban renewal, basketball star Lebron James resumed his attacks on the president.”

In that roundtable, Pastor Darrell Scott called Trump “the most pro-black president I’ve seen in my lifetime.” The quote drew some attention, but I’m more interested in the effort and outreach itself.

Tell me America, because I’m curious: What matters more? A tweet trolling two long-time hostile critics who happen to be black or getting real work done that will change real lives in black communities? Because what Trump is doing puts real points on the board.

After the Charlottesville riots, Trump faith council member Bishop Harry Jackson offered a program for racial reconciliation. Key, he said, was prison reform. He is hardly alone in that assessment. Trump is pushing hard to make it happen. How hard? He’s got his most trusted go-to guy running point, son-in-law Jared Kushner. He’s even got CNN’s Van Jones on board.

Jones is working with Kushner. He called out Sen. Cory Booker and Sen. Kamala Harris for not working with the president. Both supported prison reform, but are now booing from the cheap seats. Why? They both want Trump’s job. And they’d rather peg Trump as a racist than find solutions to racial injustice.

Jones was right when he and Kushner co-hosted a forum on prison reform: “If we can’t get together for liberty and justice for all, something’s wrong with this country.”

Why Critics Have to Call Trump a “Racist”

Unemployment is at historic lows and opportunity is rising in minority communities. And the president’s foes can’t even applaud.

I used to think they call Trump a racist despite his efforts to raise the fortunes of African-Americans. Now I believe it’s because of his efforts. Trump’s constant refrain “What do you have to lose?” thunders through tumbled down neighborhoods like hip-hop through a souped-up stereo.

It’s a beat easy to catch when the Democrats have forsaken urban blacks for Latino votes. Supporting immigration policies that guarantee to suppress wages and suck up low end jobs. Celebrating sanctuary cities while the blood of African-Americans spills on city streets.

It also goes increasingly noticed that the Democrats, founded on slavery, whip any independent mind that dares leave their plantation. Who needs white hoods when you’ve got Twitter?

Antifa’s assault on Candace Owens and Charlie Kirk Monday morning was straight out of Jim Crow.

#WalkAway may well turn into this generation’s Selma March.

So What About Trump?

Is Trump a racist? Those who know him and observe his actions closely both in public and behind the scenes find the notion absurd. Those black leaders in NYC who used to give him awards for his local efforts know better too.

Does he have a mouth (and Twitter feed) that give his opponents an easier time playing the race baiting game? Yup.

Will they play that game every single opportunity they can, manufacturing more opportunities if they must?  (Remember the reporter who on Inauguration Day who falsely said Trump had removed the Martin Luther King, Jr., bust from the Oval Office?) Will they continue to hurt the country in order to hurt Trump politically? Duh.

Still, this is about Trump. Donald Trump does falls short … like every single one of us. Like every one of us, he can love his neighbor more fully each day.

However, unlike no one else, Trump is currently the president of the United States. And he is president in a decade where racial tensions have returned to the front burner. The problem is on his plate.

Slick tricks aren’t going to cut it — Beer Summit, anyone? Talk is cheap. However, listening isn’t. And those pastors say he’s listening.

But Trump must go further in leading the country to unity. You know you can’t lead from behind, Mr. President. But you can lead from your knees. You asked John Gray to open last week’s forum in prayer. My advice? Be humble … and keep the prayers going.