The Prof Banned Phones in Class. What Happened?

Not a Walkout. No riots. No revolution. Some insights though, that match up with other research. 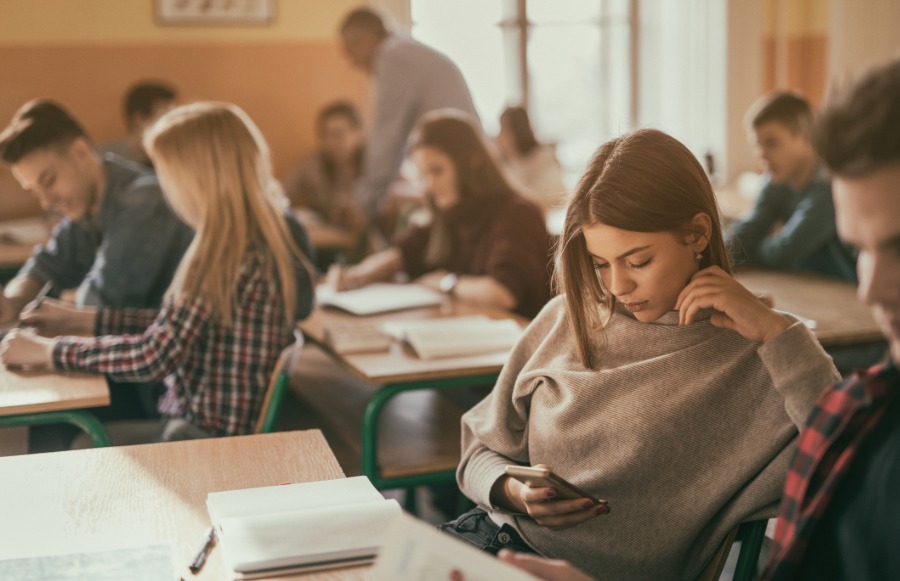 Joelle Renstrom, who teaches at Boston College, used a special piece of equipment to separate her students from their social distractions for a semester, as an experiment. The YONDR pouches, offered to her by a San Francisco startup, create a phone-free space: Essentially, the user keeps the phone but must leave the venue to unlock it. Renstrom had already tried making students dance and sing to the racket generated by their phones. But public humiliation of offenders is not, by itself, a long term strategy. Reading her essay on the question at Aeon prompted YONDR’s makers to offer her a free trial for her class.

Initially, 37 per cent of my 30 students – undergraduates at Boston University – were angry or annoyed about this experiment. While my previous policy leveraged public humiliation, it didn’t dictate what they did with their phones in class. For some, putting their phones into cases seemed akin to caging a pet, a clear denial of freedom. Yet by the end of the semester, only 14 per cent felt negatively about the pouches; 11 per cent were ‘pleasantly surprised’; 7 per cent were ‘relieved’; and 21 per cent felt ‘fine’ about them.

— Joelle Renstrom, “What Happened When I Made My Students Turn Off Their Phones” at Aeon

Some students used their laptops to stay distracted. But Renstrom took a philosophical view of that:

I’m not comfortable policing students’ computer screens – if they really want to use class time to access what YONDR denies them, that’s their choice. The pouches did stop students from going to the bathroom to use their phones. In previous semesters, some students would leave the room for 10 to 15 minutes and take their phones with them. With phones pouched, there were very few bathroom trips.

— Joelle Renstrom, “What Happened When I Made My Students Turn Off Their Phones” at Aeon

Attempts to determine whether living in a cloud of social media buzz does measurable harm to a student are often stymied by the difficulties of coming up with an agreed definition of harm, plus the fact that not everyone is affected in the same way. For example, Jean Twenge’s recent study was dismissed by some because it

did not address the question of whether gaming or social media use was more closely tied to depression. It merely correlated self-reported information on electronic device and social media use with suicidality and depression, which does not rule out the possibility that depressed people are likely to spend more time on social media.

That said, a secondary school in New Zealand saw measurable improvements in students’ national scores when the smartphone distraction was not available during the school term. In short, strategies that cannot address underlying psychiatric problems may nonetheless contribute to better grades.

Another line of research is worth considering. Do screens perform worse than paper in helping us remember what we learn? There is a good deal of evidence for that:

Despite all the increasingly user-friendly and popular technology, most studies published since the early 1990s confirm earlier conclusions: paper still has advantages over screens as a reading medium. Together laboratory experiments, polls and consumer reports indicate that digital devices prevent people from efficiently navigating long texts, which may subtly inhibit reading comprehension. Compared with paper, screens may also drain more of our mental resources while we are reading and make it a little harder to remember what we read when we are done. Whether they realize it or not, people often approach computers and tablets with a state of mind less conducive to learning than the one they bring to paper. (2013)

— Ferris Jabr, “Why the Brain Prefers Paper” at Scientific American

If this pattern persists in 2019, it matches up with the finding that smartphone kids get less sleep than others. Another “fix” isn’t the solution in either case. Both learning and sleep require that we eliminate distractions. One must choose.

Is Higher Ed Heading in the Wrong Direction? If So, Why?

Are We All Suffering From ADHD?