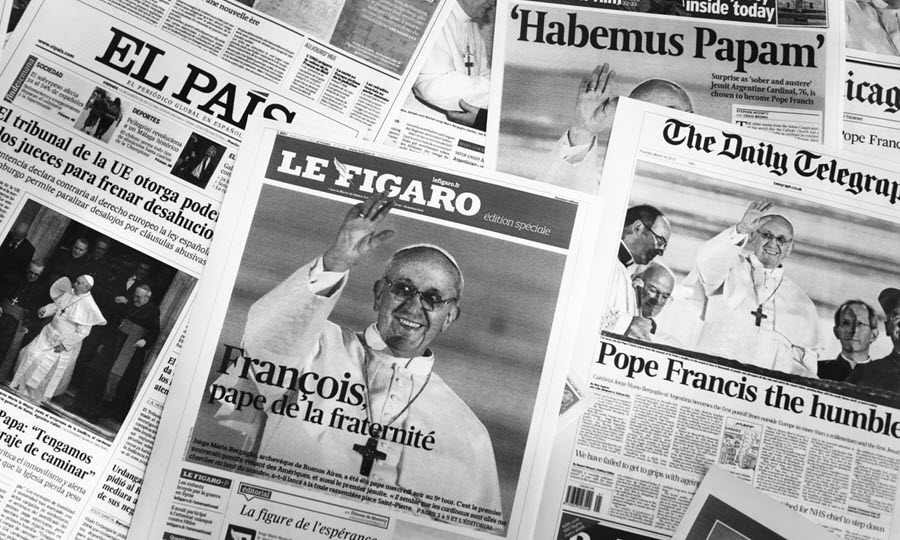 Since becoming the head of the Catholic Church in 2013, Pope Francis has not shied away from the political domain.

On Sunday, the religious leader used the COVID-19 pandemic to renew his criticisms of free-market capitalism.

“The fragility of world systems in the face of the pandemic has demonstrated that not everything can be resolved by market freedom,” Francis wrote in part of a lengthy religious text. “To care for the world in which we live means to care for ourselves. Yet we need to think of ourselves more and more as a single family dwelling in a common home. Such care does not interest those economic powers that demand quick profits.”

“In today’s world, many forms of injustice persist, fed by … a profit-based economic model that does not hesitate to exploit, discard and even kill human beings,” Francis lamented.

The Pope decried the free-market “dogma of neo-liberal faith” that views “the magic theories of ‘spillover’ or ‘trickle’ … as the only solution to societal problems.” He went on to write that “market freedom cannot supersede the rights of peoples and the dignity of the poor.”

Francis reiterated his belief that “if one person lacks what is necessary to live with dignity, it is because another person is detaining it.” He concluded that “the right to private property can only be considered a secondary natural right, derived from the principle of the universal destination of created goods.”

There’s a lot to unpack here. But breaking down the Pope’s arguments one-by-one shows that his criticisms of free-market capitalism don’t mesh well with available facts, empirical evidence, or a basic understanding of how economics actually works.

This is probably Pope Francis’s weakest argument of all.

For one, the coronavirus has wrought havoc across the globe in countries regardless of economic system. It started in Communist China, which has made some market reforms in recent decades but can by no stretch reasonably be called a free-market society. And let’s not forget that the story of how COVID-19 spread globally is largely a story of countless government errors, many of which had deadly results.

As I previously explained:

When the outbreak first reached U.S. shores, the Food and Drug Administration and Centers for Disease Control and Prevention botched our response horribly. By foolishly monopolizing testing kit production and putting up red tape, the two government bureaucracies set our ability to contain the virus back irreparably. The crisis was also compounded by the failure of government officials from both parties to take it seriously initially. Even after the government woke up to the threat, the inconsistent and confused messaging on best prevention practices coming out of the CDC sabotaged our collective response.

Worst of all, elected officials such as Gov. Andrew Cuomo of New York made the deadly decision to force nursing homes to accept patients who had tested positive for COVID-19 and so endanger their entire community. More than 6,400 New York nursing home residents have subsequently died from the coronavirus.

A cursory glance at this timeline makes it clear that the COVID-19 crisis was exacerbated by the failure of government central planning and bureaucracy — not free markets.

If anything, the private sector has risen to the challenge and met people’s unprecedented needs.

Examples abound. Amazon has delivered necessities to millions of peoples’ doors and enabled social distancing. Restaurants have shaken up their business models, embracing outdoor dining and takeout. And don’t forget the many manufacturing companies that switched to the mass production of masks and other protective gear, as well as medical equipment.

No system is perfect, but broadly, the private sector has responded admirably to the COVID-19 crisis — when the government hasn’t gotten in the way, that is.

2. False Framing: The Poor vs. Markets

It is one of the most prevalent fallacies in progressive thinking to frame markets as at odds with the interests of the people. In reality, market exchange only happens when all parties stand to benefit.

It doesn’t matter whether it is a grocery store purchase, the hiring of a new employee, or the importation of a new pair of shoes from Vietnam. Any exchange on a free market inevitably leaves both parties better off — or they wouldn’t both choose to participate. Markets are fundamentally voluntary; whereas the heavy state-planning Pope Francis advocates is not.

The Pope’s view that markets are opposed to the people’s interests is undercut by empirical data. In the last 50 years, the spread of free-trade and capitalism has driven unprecedented global economic progress.

Here are some great highlights courtesy of the Cato Institute’s HumanProgress.org:

A graph of global income per person from HumanProgress shows that “for thousands of years, economic growth was negligible. At the end of the 18th century, however, economic growth and, consequently, the standard of living, started to accelerate.”

What coincides with this magnificent development? It’s simple: The advent of free-market capitalism, the formation of institutions protecting private property rights, and the spread of global trade.

Famed economists such as Thomas Sowell have argued that property rights benefit all members of society, because they are the building blocks of the market system that leads to greater prosperity and flourishing for all. Sowell wrote that property rights “belong legally to individuals, but their real function is social, to benefit vast numbers of people who do not themselves exercise these rights.”

Property rights strongly correlate with economic prosperity, and that’s not a coincidence. Only in a society with secure and strong property can businesses create jobs and invest in communities.

Not convinced? Just consider that the countries with the least secure property rights, from Venezuela to North Korea, are the most miserable places on Earth to live.

This is why protecting property rights is the government’s most crucial role. It is, as the economist Frederic Bastiat pointed out, the reason we have the law in the first place. When it fails, everyday citizens — not the rich — pay the price, and the government becomes guilty of the very evil it was created to prevent.

There’s no doubt that the Pope is a learned man in matters of religion, and he likely has the best of intentions in preaching his collectivist gospel. But his elementary arguments against free-market capitalism are incredibly weak.

More importantly, if Pope Francis’s teachings against free markets catch on, the resulting economic dysfunction will only sabotage the interests of the same underprivileged people he is trying to help. That’s an outcome we should all pray never comes to fruition.