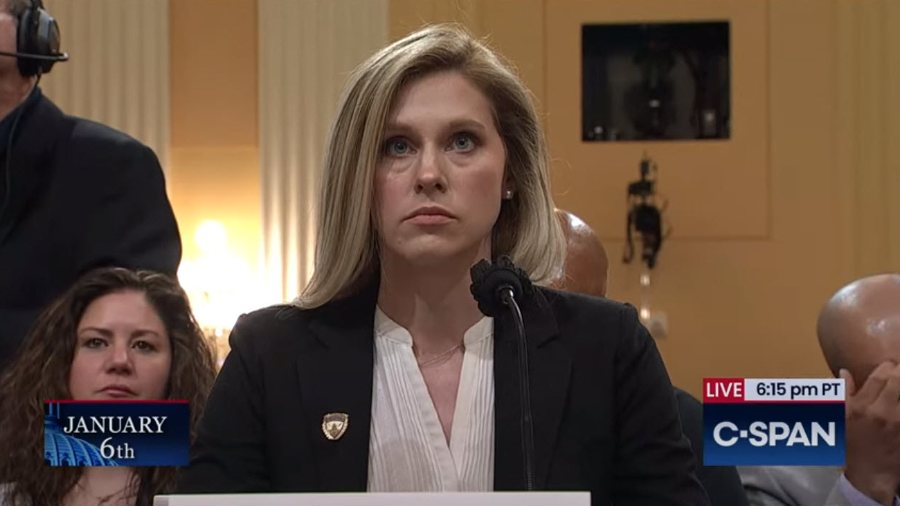 Last night’s J6 committee prime time scripted reality show featured an appearance by an officer injured in the Capitol Hill riot. No one celebrates Officer Caroline Edwards’ awful experience. After all, she wasn’t a cop executed, firebombed, nearly burned alive or assaulted by the ANTIFA/BLM army cheered and funded by the same Democrats putting on last night’s show.

But we have to ask: Of all the officers involved that day, is Officer Edwards the one America needed to hear from?

Why Didn’t We Hear from Officer Michael Byrd?

We know last night’s show wasn’t about truth. Because if the J6 “Select Committee” had any interest in truth, the first officer testifying would have been Capitol Police Lt. Michael Byrd.

Byrd, a Pelosi guard, shot and killed Ashli Babbitt inside the Capitol January 6. The Air Force vet was unarmed. Posed no risk. Video hidden for over a year now shows that in the minutes before being killed, Babbitt — a former military cop — had been begging officers to get more help. She was ignored. She was also trying unsuccessfully to stop an agitator from breaking the glass on the door leading to the Speaker’s suite. Babbitt’s husband believes she only went through the opening … and to her execution … to escape being crushed in the pressing crowd.

Wouldn’t we need to know Byrd’s side of things? Under oath? Do the America people know that Byrd refused to cooperate with the FBI and Metropolitan police investigations into Babbitt’s killing? And the FBI and DC police simply shrugged rather than force the issue? Oh, sure, after a year of being hidden away — with Pelosi even refusing to release his name — Byrd could run to NBC News’s Lester Holt for a cozy interview. But talk to authorities under oath? Or answer legitimate questions under oath before the American people?

Byrd, the FBI and Pelosi couldn’t be bothered. They protect their own.

If the committee was going to highlight a female officer, why not DC Metro Police Officer Lila Morris? Who’s she? She’s the officer caught on video beating the last bit of life out of Trump supporter Rosanne Boyland with a metal rod, as the middle-aged woman lay unconscious from being suffocated and trampled over. The pounding and pounding and pounding came as protesters pleaded with Morris and her comrades to stop and rescue the poor woman.

Was Officer Morris put before the American people? Was the beating of Boyland shown last night? A drugged-up criminal resisting arrest dies at the hands of police, and Nancy Pelosi kneels. A woman peacefully protesting at the People’s House the Speaker is charged with protecting ends up beaten and dead, and Pelosi snores.

Oh, how hollow Liz Cheney’s talk of defending democracy sounds now. And who will end up stained from this when Trump’s long gone.

They Needed Sherlock Holmes to Testify

Finally, I was hoping they’d call Sherlock Holmes to testify. Only the great detective could unravel the mystery of why the insurrection-minded Donald Trump would beg for there to be National Guard troops on hand to thwart his insurrection.

Holmes could also explain why Trump could be this cult-like leader whose supporters would do anything for him, yet when he “instigated” the riot only teeny-tiny fraction of those cultists responded.

Even more bizarre than a dog not barking in the night, those that started the actual violence at the Capitol did so before Trump even spoke. (Perhaps time travel would be more in the wheelhouse for H.G. Wells than Sir Arthur Conan Doyle.)

Only Holmes could explain why these MAGA hordes hell-bent on insurrection showed up unarmed — though we know those Deplorables love their them guns.

What isn’t a mystery is why we’re going through this bogus “insurrection” hoax and prime time hearings. It’s elementary. They’ve got no answers for the problems they’ve caused. They’ve seen the polls. Fiction and fear is all they’ve got to ward off the tidal wave that’ll wash them from power.