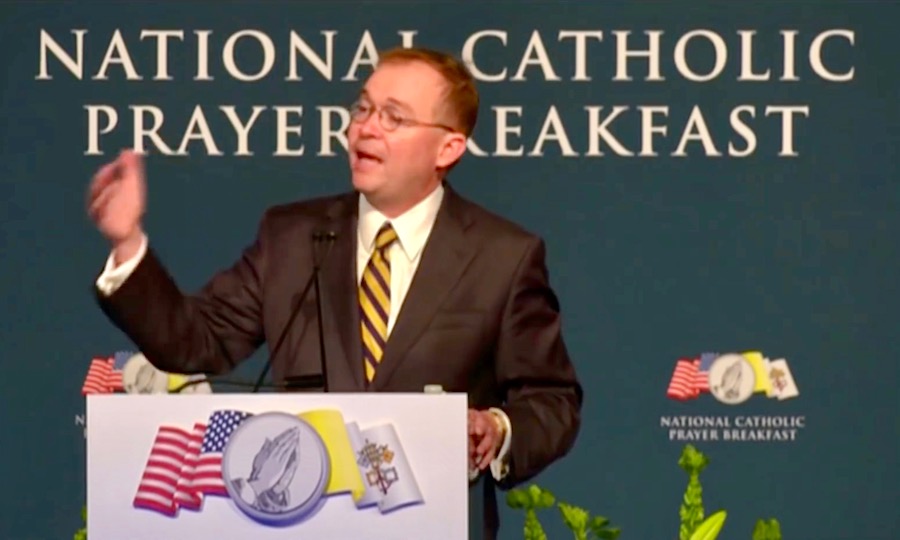 The Washington Post has a recording of acting White House chief of staff Mick Mulvaney addressing a private gathering in England this week on a variety of issues. The bit on immigration:

“’We are desperate — desperate — for more people,’” Mulvaney said. “’We are running out of people to fuel the economic growth that we’ve had in our nation over the last four years. We need more immigrants.’”

Many readers, and even the WaPo reporter I spoke with, were surprised by this, but they shouldn’t have been; Trump himself has been calling for increased immigration for over a year now. He started his immigration-expansion tour at the 2019 State of the Union, saying “I want people to come into our country in the largest numbers ever, but they have to come in legally.” (Emphasis added.) The following day he doubled down, saying “I need people coming in because we need people to run the factories and plants and companies that are moving back in. We need people.” He’s brought it up a number of times since.

Mulvaney was simply repeating what his boss had been saying for some time.

There are still some 49 million able-bodied Americans not in the labor force, after decades of mass immigration. Trump’s recovery has finally begun to give some of them a way back in, with higher wages. So some employers are panicking.

Our national birth rate is at record lows. Parents look at the uselessness of bad public schools, straining under the costs of managing “diversity.” At health care costs inflated by millions of uninsured migrants. At the price of private schools, and college tuition … and they’re just not replacing themselves. How kind of Mr. Mulvaney to offer to replace them with foreigners.

Let’s personalize Mulvaney’s plan in the form of a story. A very American story.

A Family in Trouble

Imagine “George” and “Martha,” two parents whose teens are turning out troubled. One of them, Zoe, aced the SATs, and seems set for the Ivy League. But she’s morose and cynical. The only thing that lifts her spirits? Preparing for the next radical protest march with her morbid, tattooed friends.

Her two younger brothers, Tim and Jim, show little interest in school, except for gym and shop class. Jim keeps getting fired from after-school jobs for mouthing off. Tim keeps disrupting class and ending up in detention. Dad sometimes doesn’t have much hope for them, to be honest. And Zoe? He’s actually afraid of what she’s turning into.

None of the three kids does chores, no matter what George tells them. Mom’s busy working, too, so the house is going to seed. A thick layer of dust coats the furniture. The dog doesn’t get enough walks, so now he’s fouling the carpet, and leaving around the house a perpetual “bus station bathroom” smell. As parents, each feels increasingly like a failure.

The situation is sad enough that George and Martha are questioning their idea of having another child. They’d briefly whispered to each other, excited about the prospect. They’d even gone into storage and dug out Zoe’s old baby furniture, looking at it fondly.

Is It Fair to Bring a Child into a Family Like Ours?

But one walk through the urinous, doom-soaked living room takes the wind right out of their sails. They can hear the death-metal blaring from Zoe’s bedroom upstairs. The couch is littered with Tim’s hockey gear, the loveseat strewn with a pink slip Jim tore up from the last Whataburger to fire him. Martha looks around the room, and the light goes out in her eyes. She just shakes her head. “George, I just don’t think it’s fair to bring an innocent child into a house like this.”

George nods, solemnly. “Does it really have to be this way? I’ve got to think we can do better for these kids. Find ways to understand them and motivate them better. Let them know we want them to win.”

Martha purses her lips. She has an idea. “Why don’t we talk to Pastor Mulvaney? He’s always full of ideas. Really practical, you know?”

Mulvaney: A Man with a Plan

At Pastor Mulvaney’s office, George and Martha ease back on his vast, Corinthian red leather couch. They take in all the civic awards, the plaques, from the Chamber of Commerce, the local Kiwanis Club, and the Shriners. They nod at Mulvaney’s doctoral diploma from Harvard Divinity School.

They’ve already laid out the problem to this dapper, fast-talking pastor. Each seems relieved to have it off his chest, but also a little ashamed of trash-talking his very own children. Mulvaney holds his fingers up at his temples, as if to contain the energy of his super-conducting insights.

“You’re prayed about this, of course?”, Mulvaney says, as if to check off some crucial box on an unseen government form.

George and Martha both nod. They squirm a little in their seats.

“Okay, okay. I see where you’re coming from. Each of you is a good parent, with good intentions. You just haven’t ended up with very good kids.”

Mulvaney smiles warmly. He’s on a roll. “Hey, it happens. The rain of the Lord falls on the just and unjust alike. What did the Father of the Prodigal Son ever do to deserve his kid turning out such a wastrel? Nothing, scripture tells us. Absolutely nothing. It’s just the luck of the draw. Genetic drift. Kids are much more influenced by their peers than their parents, did you know that? Studies, I’ve got studies out the wazoo that demonstrate that.” Mulvaney gestures vaguely to leatherbound volumes lining his walls.

What’s their future going to hold? Being greeters at Walmart? Schlepping boxes at Costco? Maybe a Fentanyl habit?

“The thing is not to make the problem worse. Which having another kid, mixing up the same exact genes in the same environment, just only going to do. If I were you, I’d put that idea right out of your minds. George, you should get yourself snipped, to remove the source of temptation. I know a guy, he’s great!” The pastor hands George a urologist’s business card.

The Conveyor Belt to Palookaville

“It’s not that you shouldn’t have kids,” Mulvaney explains. “It’s just that you’ve got the wrong ones. It happens. Even people well-suited to parenthood have got a bunch of rogue genes in the woodpile. Sociopathic ancestors whose recessive traits just popped up, and you’re stuck with them.”

Martha nods, slowly, thinking. “But what would that mean? What could we do?”

Mulvaney drinks some water. “Well, let’s think that through. You have two boys who seem to be riding the conveyor belt to Palookaville. What’s their future going to hold? Being greeters at Walmart? Schlepping boxes at Costco? Maybe a fentanyl habit here, some wage garnishing for unpaid child support there … it doesn’t look good. A hundred years ago? Boys with strong backs and lots of animal vigor were what America needed. What parents like you needed. Now? Not so much.”

Martha and George ease back, soaking this in.

Those Kids Would Do Their Chores

“Your daughter, Zoe? You shouldn’t worry too much about her. Yeah, she’s kind of a nasty piece of work, and likely to get nastier. The Ivy League will do that. But it will also certify her as part of our country’s elite. She’ll find some kind of job in academia or the government where she’ll get paid to bully people, so she’ll love her work. She does sound likely to turn out either an ecofreak or a lesbian. So don’t count on her to give you any grandchildren …”

Martha looks down into her lap, a little sad. George notices and speaks up, for her sake.

“So … this is it? Our family is messed up, and there’s no fixing it, and things will only get worse? Thanks a ton, Pastor.”

“No, no. God never sends us a locked door unless He also hides a key. Of course there are steps you can take. I can tell that you two really do need something new. What would you think of kids who were happy to be there? Who came from a rough situation, and were overflowing with gratitude that you gave them a second chance? I can tell you one thing: Those kids would do their chores. They’d make sure not to get fired from Whataburger. Probably work double shifts at minimum wage.

“Those kids wouldn’t sulk about climate change and go blockade fossil fuel plants. They’d be too busy! They’d be too relieved that you plucked them out of adversity, too worried you might send them back.”

The Jobs American Kids Won’t Do

At this point, Pastor Mulvaney reaches into his drawer and takes out a binder. He hands it to Martha. “Just flip through that. It has head shots, vital stats, and the back stories of dozens of kids from Latin America, Asia, and the Middle East. Good kids, hard-working, obedient kids who do their schoolwork. Go ahead, take it home. Talk it over. Take it to God in prayer.”

George furrows his brow. “So you’re saying we should adopt new kids?”

“Three or four, in fact,” Mulvaney says, smiling broadly. “It will make your home more diverse. It will give you a shot in the arm. Revitalize your domestic economy. And maybe just seeing Paco, Akhmed, and Chang around the house will spur your kids to up their game. If they see that the new kids on the block are eating their lunch, maybe they won’t be sullen, and take you two for granted.”

Martha hesitates for a moment, eyes closed. Then she takes the binder and cradles it in her arms, holding it close.

George shakes the pastor’s hand. You’ve given us plenty to pray about.”

Later that night, as they watch their biological children thump around the house, George and Martha will see them in an entirely new light.