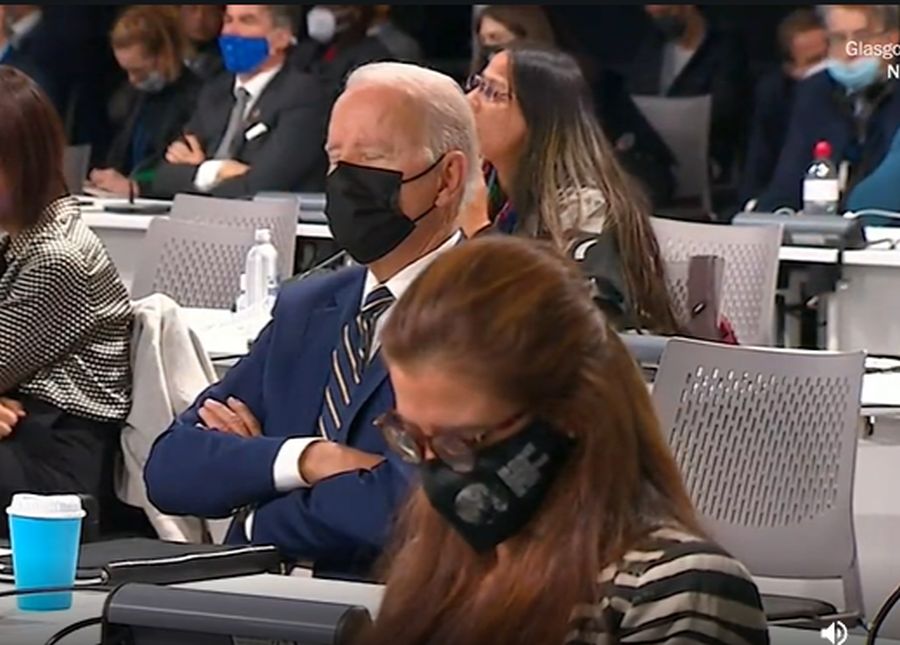 Kicking in a little extra caffeine for today’s Brew in honor of our fearless leader.

Over 130 world leaders have flown in on their private jets to Glasgow, Scotland, for a massive climate change conference, #COP26. The threat to our planet is so ominous, so imminent, the stakes of the conference our so high, that the President of the United States promptly fell asleep.

I could be wrong, but I think the aide told him “Let’s Go Brandon.”

Here’s a good idea. If you don’t want to be called “Sleepy Joe” don’t fall asleep with the whole world gathered around you. Just a helpful hint.

Then again, maybe Joe didn’t need to be awake because he’s been around long enough to hear this all before. But in that case it was the dire warnings about global cooling. A man-made Ice Age.

"Back in 1970, the prevailing hysteria was the threat of a new ice age—promoted by some of the same environmentalists who are promoting global warming hysteria today."
— Thomas Sowell

So maybe getting some beauty rest isn’t the worst idea for Biden.

It’s Election Day and all eyes are on Virginia. A final poll from Trafalgar shows Republican Glenn Youngkin with a narrow 2.3% advantage against former governor Terry McAuliffe. (Here is that result and others, most showing Youngkin slightly ahead.)

In a fair fight, Youngkin likely wins. But Democrats are doing the “swamp the ballot box with mail-ins” trick and McAuliffe has brought in Russia Hoax conspirator and election fixer Marc Elias. Former President Trump on Monday urged the MAGA Army to come out and vote to overcome any funny business.

He also told supporters to ignore ads paid for by the boy-abusing Lincoln Project that claim Trump doesn’t like Youngkin. (Another sleazy effort to suppress the MAGA vote.)

Meanwhile, McAuliffe — whose Lincoln Project pals staged a “white supremacist” racist hoax — continues playing the race card the way Trump plays golf. His new thing? There are too many white teachers in Virginia. This after saying how wonderful the public schools are in Virginia … while forgetting to mention four of his five kids went to private school.

Jen Psaki announced Sunday she’s tested positive for COVID-19 and is showing mild symptoms. The good news is she hadn’t been near the president in days, having bailed on Biden’s Europe trip after someone in her household fell ill. Biden has reportedly tested negative.

As Daily Wire noted: “The announcement from Psaki comes days after Democrat President Joe Biden coughed into his hand after giving a speech and then proceeded to shake people’s hands with that same hand.”

Only 42% of Americans believe Joe Biden is “mentally sharp,” according to a new poll out Monday from I&I/TIPP. The figure is that high because 74% of Democrats say Biden is mentally sharp. Only 34% of independents believe Biden is firing on all cylinders, while a meager 13% of Republicans think he’s playing with a full deck.

Wouldn’t you really want to see a poll of those 130 world leaders in Glasgow? Then again, maybe we don’t want to know what the rest of the world really thinks.

Meanwhile, here’s another example of Biden’s incoherence … at least the political variety. After spending every day of his term doing what he can to wreck energy production in the U.S., Biden spent the weekend urging the G20  to boost energy production.

He also had another moment at the G20 where he showed the world he’s not the boss. He agreed to take questions. “I’m told I should start with AP.” (Associated Press.)

A judge in Illinois has sided with the Chicago Fraternal Order of Police, granting a temporary restraining order preventing the city from firing cops who do not comply with a mandatory vaccine order. The city can still put non-compliant cops on no-pay status.

American Truckers Association: Some Trucking Companies May Reject Gov. Contracts Rather Than Force Vaccines on Their Drivers

As the Biden Administration races toward forcing vaccines on government contractors, they may be running straight into a wall. The American Truckers Association tells Politico that some trucking companies may well give up their government contracts rather than force their drivers to take the jab. The cost, they say, is not worth the government check.

Executive VP Bill Sullivan warns that this could lead to delays in getting certain food to troops around the country, or fuel for military vehicles, even inhibit the deploying of the National Guard.

That’s not the way to convince the White House to change its mind. Say that truckers won’t be able to drop free stuff off for illegal immigrants. Then we’ll see a reconsideration of the policy.

But enough on grumpy topics. Now that we have Halloween out of the way, we got Thanksgiving and Christmas to look forward to.

Macy’s Thanksgiving Parade is Back!

Good news! The Macy’s Thanksgiving Day Parade will be returning in full fashion this year. Pandemic restrictions last year led to an anemic substitute for the holiday tradition. However, the 95th annual parade is promising to be high-flying, high-stepping, high-kicking extravaganza.

Plus the tradition of showcasing Broadway musicals continues with performances from the casts of Six, Moulin Rouge! The Musical, and Wicked. Plus the cast of NBC’s upcoming live production of Annie.

And you can’t have a Macy’s parade without The Rockettes … and a certain Mr. Kringle.

Speaking of That Famous Orphan and Her Mutt …

Incidentally, the live Annie airs December 2. This won’t be your parents’ Annie. Daddy Warbucks is being played by Harry Connick, Jr.! Miss Hannigan will be played by the ever-amazing Taraji P. Henson of Hidden Figures and Empire fame.

One thing that won’t change? A cute kid (Celina Smith) will remind us that the sun will come out tomorrow. It is, after all, only a day away.

And speaking of Big Tech censorship, Stream contributor Jennifer Hartline has had a taste: “Twitter Locked My Account For Saying a Man is Not a Woman”

Al Perrotta is the Managing Editor of The Stream, chief barista for The Morning Brew and co-author, with John Zmirak, of The Politically Incorrect Guide to Immigration. You can follow him at @StreamingAl at Gab, Parler, MeWe and now GETTR. He’s also the composer of the newly released Christmas single “A Father’s Love (Joseph’s Song),” now available on iTunes and Apple music, with more music services to follow! Go to https://randomactsofprayer.hearnow.com.