A flag processional with colorful tapestries of the distinct twelve tribes of Israel took place at the Jerusalem Prayer Breakfast in Dallas, Texas, March 25, 2022.

Over 800 people from around Texas and the nation converged at the Hyatt Regency in Dallas from Thursday night, March 24, to Friday night, March 25, 2022, for the Jerusalem Prayer Breakfast event.

The first night was a worship night with music and speeches from a variety of Christian ministry leaders — like Pastor Robert Morris of Gateway Church, June Hunt from Hope for the Heart Ministry, UPPERROOM worship, Kyle Martin from Time to Revive, Zion Dance Project and more.

The next day — the main event — a three-and-a-half-hour Prayer Breakfast on Friday morning included a live speech by Governor Greg Abbott, a headline speech by U.S. Senator Ted Cruz, and a video message from Israeli President Isaac Herzog. Later in the afternoon and evening saw well-attended “breakout sessions” in the afternoon, and a Shabbat Dinner for the sponsors of the event. 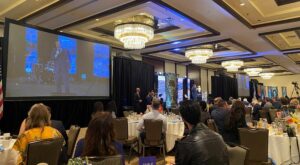 As quoted by the Jerusalem Post, Congressman Michael Cloud said, “It is important at this time that we stand for what is right, what is just, and what is true. There is no moral equivalency when it comes to Israel — a nation that could be destroyed by its enemies in one day. That is why our government stands in support of Israel.”

The purpose of the Jerusalem Prayer Breakfast is a prayer movement bringing “together government leaders and influential Christian leaders from all walks of society for a gathering in Israel’s capital city to pray for the peace of Jerusalem.” The JPB has also been to many other places in the world like the U.K., Singapore, Ghana, Finland, Netherlands, and most recently Estonia.

The Jerusalem Prayer Breakfasts are rare occasions where Jews and Christians can come together around a unifying theme — to simply pray. Albert Veksler, the executive director of the movement, said many times during the event that “prayer is a very unifying thing. We can all agree with prayer.”

Themes that were highlighted over and over again throughout the programming were — either in prayer or through messages — thankfulness to God for the 1948 miracle of the modern state of Israel, the threat of a nuclear Iran and prayers for the U.S. to never let that happen to our strategic ally in the Middle East, prayers for Ukrainian Jews to be able to make aliyah to their spiritual homeland during a turbulent time of war, and prayers for the glory of the Lord to descend upon the Jewish people all over the earth as well as for the Christian Church to be awakened.

Highlights from the event included a stirring headline speech by Senator Ted Cruz praising the work of the Trump administration moving the American Embassy to Jerusalem after years of stalemate, a 24-minute prayer by Michele Bachmann as she literally prayed her speech and stirred everyone’s hearts to love Israel more, and the incredible words by Knesset Member Tatiana Mazarsky, chair of the Jerusalem Prayer Breakfast Caucus in Israel, “Prayer brings fresh miracles, and the Jerusalem Prayer Breakfast changes realities. As we appeal to our Heavenly Father, the prayers of each of us and together will change attitudes in Israel and the United States.”

How Will the Church Respond?

Pro-Israel political forces and key ministries stood together as one — highlighting a key issue of our generation: How will the Church respond to the growing antisemitism in the world and will the Body of Christ support God’s chosen people against hostile forces?

The Jewish people that I spoke to at the event were so thankful for the support and the love of Christians from all over Texas. One commented to me that they “never felt alone among Pro-Israel evangelicals.”

Praying for the Peace of Jerusalem

A flag processional with colorful tapestries of the distinct twelve tribes of Israel, a Zion Dance Project original dance highlighting the dramatic escape of the children of Israel across the Red Sea as Pharaoh’s armies were “drowned into the sea,” a beautiful song “Come Let Us Reason Together” sung by 77-year-old June Hunt, the former soloist for the Billy Graham Evangelistic Association and national Bible teacher, made it clear that the unifying message was that we together — Jew and Gentile — must pray for the peace of Jerusalem.

As I highlighted in my message on Thursday night, those who came to the Jerusalem Prayer Breakfast were zealous Christians who are not satisfied to just sit back any longer, but who want to actively stand up and work for what is right.

We must as a Church say during this generation — STOP JEWISH HATE. We must become walking prayer and live out Psalm 122:6 each day as one Body of Christ.

The Jerusalem Prayer Breakfast was a touch point for so many to do just that. This last weekend, we were one — Jew and Gentile — as we sought God together.

May we see the answers to our prayers in the days to come.