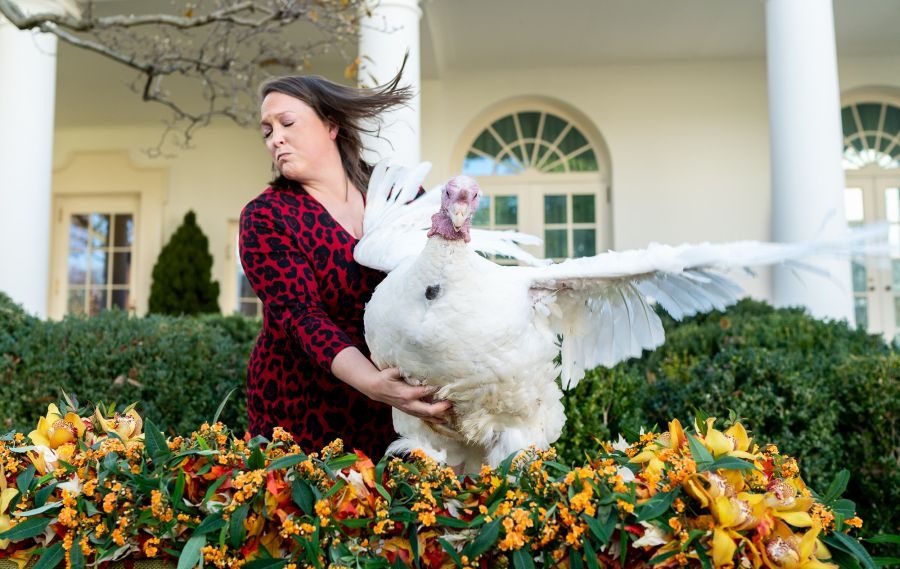 A handler places “Butter” the turkey on a table getting set for it’s pardoning Tuesday, Nov. 26, 2019, in the Rose Garden of the White House. Meanwhile, the Democrats keep dropping this turkey of an impeachment effort on the White House and the American people.

It’s one of the greatest moments in sitcom history. The 1978 Thanksgiving episode of the 70’s hit show WKRP in Cincinnati. Station manager Arthur Carlson has dreamed up a huge Thanksgiving promotion. His idea: release a bunch of live turkeys over the city. Disaster … and hilarity ensue.

Battered and dazed, Mr. Carlson returns to the station: “As God is my witness, I thought turkeys could fly.”

This week House Democrats returned home, battered and dazed by polls showing support for impeachment dropped after their two weeks of show hearings. Dropped like turkeys on the heartland. Somewhere this weekend, Adam Schiff is mumbling, “As God is my witness, I thought impeachment would fly.”

A true sign that Democrats not gripped with Trump Derangement Syndrome are losing their love for the impeachment effort? Freshman Democrat Abigal Spangberger of Virginia was so amped to oust Trump she co-authored an op-ed in September pushing for impeachment. Today? As CNN reports, she avoids talking about impeachment whenever possible.

Michigan Democrat Rep. Brenda Lawrence. Lawrence, a staunch supporter of Sen. Kamala Harris, had also been all gung-ho for the impeachment inquiry. Now, she says she sees no “value” in continuing the impeachment push, and is urging a censure vote instead.

The Chicago Tribune is picking up the censure call. Of course, they say, Trump’s actions with Ukraine were a clear “abuse of power.” However, they want to use the same standard they used when arguing against Bill Clinton’s impeachment (after he was caught lying under oath and using his office to get a job for Monica Lewinsky to get her out of the way.) The Editorial Board writes:

Impeachment, we said on Dec. 17, 1998, is “a constitutional sword meant to be unsheathed only in the gravest, most unusual circumstances and to be wielded only to preserve the security and integrity of the republic.” Clinton’s offenses did not meet that standard, and neither do Trump’s. A day later, in advocating censure, we wrote that impeachment is about protecting the nation, while censure is about punishing the officeholder: “Properly crafted, a censure would not be a slap on the wrist, but a historic condemnation.”

Censure Big Orange, the paper writes, and then the voters in November 2020 can decided to eject Trump from office.

Do you think the Chicago Tribune is rejecting impeachment because Trump’s alleged misdeeds are no threat to the nation or because going through with an impeachment would be a major threat to Democrats in 2020? Do you have any idea what the Impeachment Turkey would smell like after another year? They know what side their dinner roll is buttered on.

A censure vote would be the best way for the House Democrats to rid themselves of their current mess. I mean, do they really want to use the most powerful weapon that can be used against the duly elected President of the United States in order to, in essence, protect the fading Joe Biden? And Hunter Biden? Bad enough they protect MS-13 and baby-part sellers. Try tossing in a crack-loving, stripper-impregnating politician’s son who scored millions from a corrupt foreign company thanks to Daddy’s name.

A strong censure measure … or even one that is mild enough to draw some Republican votes in the Senate … allows the House Democrats to say “Bad Donald! Bad!” It protects to some degree the “moderate” Democrats who ran and won in Trump districts in 2018, swearing to high heaven they had no interest in impeachment. It allows the Democratic candidates who are in the Senate to campaign rather than spend week upon week in Washington for an impeachment trial.

Straight to the Ground

In fact, one can imagine Nancy Pelosi is spending Black Friday on a mall Santa’s lap asking for a censure vote for Christmas. But Grinch’s like Adam Schiff and Alexandria Ocasio-Cortez will never allow it. Maxine Waters hasn’t been screaming impeachment since November 9th, 2016 only to get a censure vote. Nobody sends campaign funds to candidates like Rashida Tlaib for saying, “We’re gonna censure the M-F!” The Resistance, both in the Democratic base and tucked hidden inside the White House and Deep State, will not be denied their effort at 230 pounds of Trump’s flesh.

So, this impeachment will go on. And the Democrats high on the impeachment drug will ride this turkey straight into the ground.