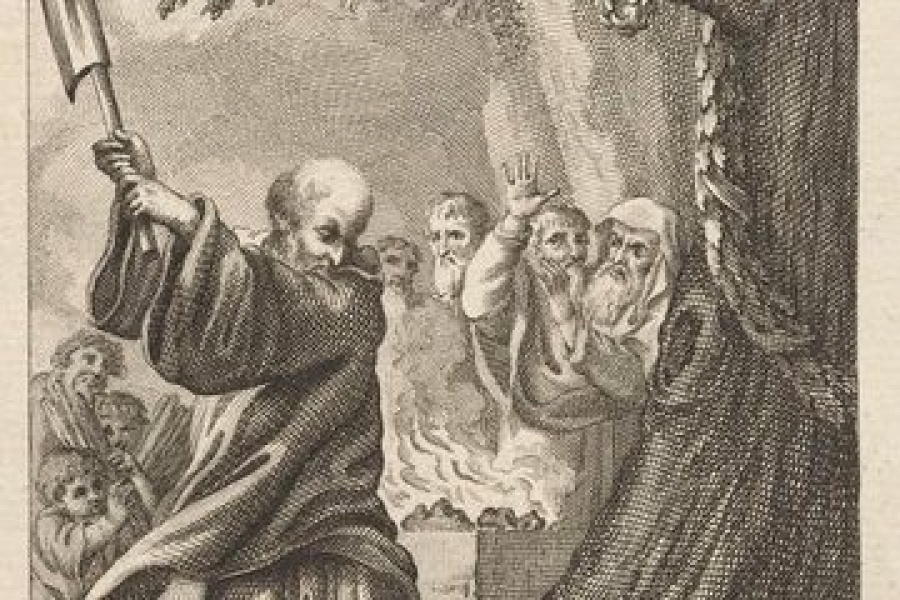 St. Boniface, apostle to the Germans, cuts down the pagans' "sacred oak."

Events around the world in recent years have followed a pattern. They seem like the plot of multiple bad end times sci-fi stories, all mashed together in one horrific, implausible mess. I’ve called this principle the Gunshow Apocalyptic Novel Insanity co-efficient.

But when we look at the Catholic Church, this above isn’t quite accurate. In fact, events in my church echo quite a good apocalyptic novel. The Lord of the World, by Robert Hugh Benson, depicts an end-times scenario. In it, a global leader rises promising peace. And coexistence among religions. The sustainable development of natural resources. And above all, humanitarian progress. Secular elites, media, institutions, and globalist power brokers? They love him to death.

The only fly in his ointment? Pesky orthodox Christians of every church. They won’t join his “Religion of Man” which venerates creation instead of the Creator. Did I mention that Pope Francis has called this his favorite novel? Too bad he seems to have mistaken the villain for a role model.

A Pagan Pretext to Create a Post-Christian Church

It’s hard otherwise to understand recent events at the Vatican. The ongoing Amazon Synod cites the total failure of Catholics to evangelize small, hunter-gatherer tribes in the jungle. Then it uses that as a pretext for massive “reforms” in the Church. The whole exercise was orchestrated by liberal German bishops. They bring some expertise: They have likewise failed to evangelize their own pagan masses.

The Synod’s guiding documents are literally revolutionary. As in the French or Russian revolutions. In the name of eco-theology, they elevate the forest cults of pagans. Not merely as customs, but as a source of divine revelation. The documents mention such cults in the same breath as the Bible and apostolic Tradition. Funding for the groups leading the Synod? That came from the pro-abortion Ford Foundation. A prominent board member is Cecile Richards, former president of Planned Parenthood.

‘Jesus the Hippie’ Joins the Pantheon

The Synod itself may be used as a pretext to throw out ancient Church disciplines such as priestly celibacy. And to ordain women deacons as a prelude to ordaining women priests. Which Pope John Paul II taught is totally impossible. Robert Mutsaerts of the Netherlands offered a pithy summary of the Amazon agenda.

A kind of eco-socialism, an amalgam of ecology; climate change; ecumenism; viri probati; consecration of women; and, as an afterthought, sometimes a mention of Jesus, but then not as the Son of God and Redeemer: Jesus the philosopher, revolutionary, and hippie. Jesus gets his little spot in the Pantheon, as one of many.

As part of this Synod, Pope Francis presided over a prayer service. At it, wooden images of a naked, pregnant woman were literally worshiped. As in, people prostrated themselves before them. That’s something as no Catholic ever does before any statue. Even of Jesus. We don’t do that in front of relics of the True Cross. Or the Shroud of Turin. We save such a gesture for the Eucharist. Nothing else.

For a few days, to save face, some Vatican officials and Francisbot journalists engaged in spin. They called the naked, wooden idols images of Mary. (That still wouldn’t be okay, of course.) But they dropped that story. Instead, we got the admission from various Vatican press outlets. The statues represented “Pachamama,” an icon of life and fertility popular in the region. Soon we learned that the name also refers to pagan goddess of the Incas.

Imagine if some apostate imam had enshrined a taxidermied pig on top of the Qaaba in Mecca. Or if some self-hating rabbi had sprayed the Western Wall with swastikas. That’s how bad this was.

Maybe you’re not sufficiently creeped out? Okay. That goddess wants to come to your living room. Netflix just released a kids’ cartoon entitled Pachamama. Watch as an aspiring young shaman sets out to save the fertility idol, which wicked folk stole from his village! Then maybe make some popcorn and bring out the Ouija board.

Two years ago, [Bolivian] President Evo Morales, of Incan/Aymaran descent, claimed the rights to all three branches of government, and his goons were eliminating opponents in the dead of night. At the time, I was teaching pastors in Cochabamba, Bolivia and so witnessed the rise of indigenous paganism as a political force. In January 2011, Morales introduced legislation that grants legal rights to the Earth and provides an ombudsman to hear nature’s complaints as voiced by the all-knowing high priests of deep ecology, who claim to be spiritually in touch with Nature!

The worship of Pachamama, the fertility Goddess of Nature, is now a fundamental element in the law code of Bolivia, and Morales (in his commitment to Pachamama and to the ancient Incan religion of Bolivia) is supported by a shadow cabinet of shamans, who sacrifice llamas as part of this spirituality.

Bolivia is perhaps the first example of a Marxist state that is religiously, occultically pagan.

Maybe you forgot who Evo Morales is. Here’s a picture of him presenting the infamous “Communist crucifix” to an approving Pope Francis.

Soon after the ludicrous ritual, Synod organizers enshrined the crude pagan fetishes on the altars of an ancient Roman church. Does all this sound like a scene from the Book of Maccabees? You know, the one with pagan idols in the Temple? Well some actual Maccabees appeared on the scene. They took direct Christian action. Local Catholics outraged by this pagan profanation walked into the relevant church (unlocked, even at night). They seized the idols. Then marched over to the Tiber. That’s the traditional dumping ground for the bodies of hated politicians and even popes. And the Christians threw the idols in the river.

They explained their actions simply.

This was done for only one reason. Our Lord and Savior Jesus Christ, his Blessed Mother, and everybody who follows Christ, are being attacked by members of our own Church. We do not accept this! We do not longer stay silent! We start to act NOW!

The response has been predictable. The leftist Catholic writers and priests in favor with the Vatican cried … you guessed it: “Racism!” They accused the Catholics involved of … “Xenophobia.” Following the script for the entire Amazon Synod, they used hapless, uncatechized hunter-gatherers as a stalking horse for a decadent, post-modern and post-Christian ideology. One which just happens to fit the agenda of globalists hungry for political and economic power. But that’s just a total coincidence, of course.

History fans will remember how dissipated French aristocrats who dabbled in radical ideology followed Rousseau’s adoration of the “noble savage.” The chaos unleashed in the subsequent Revolution offered savagery aplenty. But little that we’d call noble.

Vatican officials are reportedly pushing for Italian police to find the Catholics who cleansed the temple. And arrest them for theft. Lifesitenews has been the best source reporting on this squalid, tawdry spectacle. A reporter from that site asked me for a comment. I’ll share it here too.

The enshrinement of pagan idols in a church at the Vatican was a hate crime against every Catholic alive. And against our pagan ancestors. They abandoned such demonic fetishes for the God of Abraham, Isaac, and Jesus. Imagine if some apostate imam had enshrined a taxidermied pig on top of the Qaaba in Mecca. Or if some self-hating rabbi had sprayed the Western Wall with swastikas. That’s how bad this was.

The brave members of the Church who tossed those crude sex-magick totems into the Tiber? They deserve our thanks and support. If only more bishops and priests proved so spirited in their defense of the fundamentals of our faith. If the Vatican identifies and prosecutes these courageous Catholics? They should in turn file hate crimes charges with the Italian government against the organizations that colluded in profaning this historic church.