It's who counts the votes. 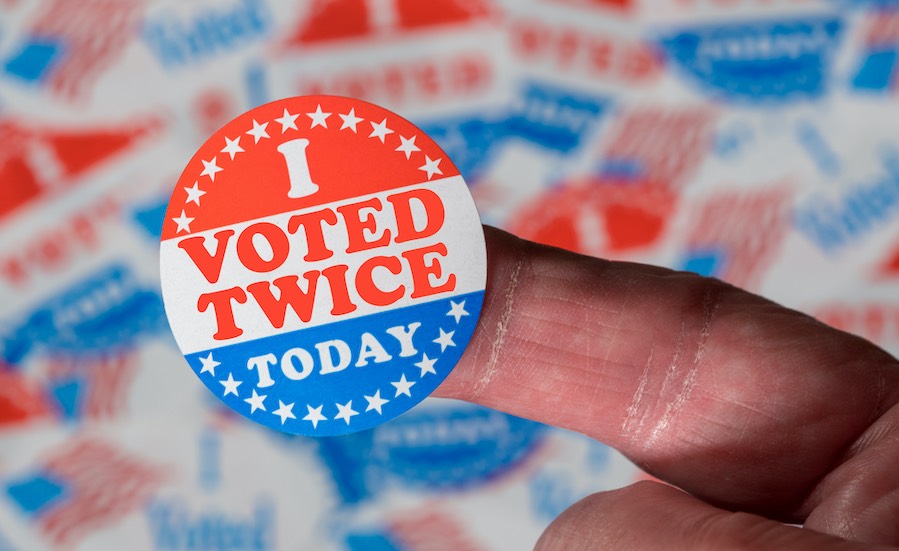 I predicted that unless there was wholesale cheating Trump would win.

There was, is, wholesale cheating. There isn’t an educated soul anywhere that doesn’t know that ballot stuffing is a common Democrat ploy in their urban strongholds. In Wisconsin, more votes were found than registered voters. The late “discovered” ones are going to Team Biden of course. We saw huge crowds for Trump in Michigan, Wisconsin, Pennsylvania and elsewhere that dwarfed those for Team Biden. Yet, somehow, Team Biden had more votes. But only after the counts were stopped to see how many more votes were needed.

The panic over COVID-19, a crisis that did not go to waste, contributed mightily to this.

Ask any Team Biden voter who Tony Bobulinski is, or about Joe Biden’s treason. The media and Democrats strategy to remain utterly mute on this subject, a clear admission they believed Bobulinski, paid off.

Does anyone else find it odd that more Americans apparently voted for Biden than voted for Barack Obama in 2008 … yet the Republicans, who were supposed to be sent into the wilderness by Trump for a generation, held the Senate and picked up seats in House?

The end has not yet come, and we don’t yet know with certainty what will happen. For the sake of argument, though, let’s assume the worst, that they get away with it and install Biden as president. Call this a post-Halloween horror story. If and when Trump marches to victory, this article will serve as a reminder of the dark fate we escaped.

Trump victory? I tell you what. I lost count of the times these last 4+ years we read that Trump was buried in a deep hole with no hope of escape, yet this famous sentence always ended these stories: “With a mighty leap Jack was free!”

Team Biden and the Oligarchy

All my tweets die after 7 days of coronavirus, so here’s a screenshot of a poll I ran on Twitter on November 4:

If Team Biden manages to swipe the election, how many months until President Kamala?

The outcome makes sense. There isn’t anybody, except strict TV watchers, who believes Biden will be the actual ruler. Normies buy Biden’s little-guy schtick, but everybody else knows his true state.

The oligarchic elite running Team Biden are happy to have him as a figurehead, and will maintain that as long as they can. But they’d be just as satisfied with Kamala, whom they could tout as the “First BLACK! Female President.” If Biden’s treason does pop back up and causes trouble, they could easily sacrifice him.

In any case, I’m certain Biden’s health won’t allow him to finish the term. It is President Harris at some point. The only question is when.

Parkinson on the End of Democracies

Historically, according to C. Northcote Parkinson, every democracy has ended in one of two ways: oligarchy or dictatorship. Dictatorship seemed the livelier possibility, or perhaps that was only wishcasting on my part. The oligarchy won.

In considering the question of how long a democratic phase of government may be expected to last, we can appeal to reason, to history and to recent experience. Merely theoretical discussion would lead us to expect one of two things. Either the proletariat would establish a socialist state or it would fail as against middle-class opposition.

If it succeeded, the State would acquire such an accumulation of centralised power — political, economic, religious and cultural — that some of the former upper class would be goaded into revolt. Supposing the conspiracy or rising should attract any measure of support, in the name of freedom, the strongest personality in the government would make himself dictator during the emergency: thereafter, the rising crushed, he would remain dictator as a precaution against any future threat of the same kind.

There was one too many deplorables for our credentialed betters to take. And so here, hypothetically, as of this writing, we are.

Ver Are Your Paperz?

There will be peace upon the land for a short period. Riots and looting won’t be necessary, at first, and so the masters of BLM and Antifa will have them stand down. Which they’ll do, more or less.

There needs to be time for those aware of the cheating to say, “I guess this isn’t so bad after all.” Anybody who brings it up six months from now will be called a conspiracy theorist and dismissed. The honeymoon will be the phase the oligarchs divvy up their territories. This won’t be a conspiracy, per se, just the united action of like-minded elites. They’ll begin fighting amongst themselves soon enough.

Gun manufacturers — if I’m elected I’m coming for you. #DemDebate

Those expecting a fading piece of parchment to stop the left’s excesses will learn soon enough of the power of paper against steel. Remember what happened to freedom of association? And speech? And worship?

Some person on the left called for a Truth and Reconciliation Committee, at which deplorables would be asked to confess their sins of racism and Trump support. This will happen.

Woke politics will be everywhere. Don’t expect a law saying all whites are evil, but do look for critical race theory to be restored to government training. The FBI, et al., will be more aggressive in going after “white supremacy.” President Harris has already been tweeting about how Equality is not enough and we need Equity, which is to say, equality of outcome. Hard quotas, excepting white men, will grow. The propaganda against whites, already high, will hit fever pitch. Woke politics is, after all, identity politics.

The Senate was retained by the Grand Cucked Party, so there will be some measure of resistance to the most outrageous forays of Team Kamala (I’m assuming we’re some six months in at this point). But they’ll surrender on most things.

Big Tech will start cracking down in earnest. They were only warming up before. Dissident opinion will become rare on major sites. One tactic they only flirted with before will be juiced: bank deplatforming. Hard to buy and sell without the woke mark.

Biden promised a national mask mandate. The legality of this is suspect. But, then again, it’s also illegal to stuff ballot boxes. The actual state of the waning pandemic will be meaningless. Obeying is what’s important.

Climate change will be a thing again. The Senate would likely bend over for this, because the left really learned how to sell fear in the pandemic panic. Look for new “discoveries” in how global warming will kill you.

The Supreme Court, which is now more centrist, will be less relevant, because of Executive Orders.

Which country will be the first to be bombed? Taiwan, as a favor to China? Russia? The Maldives? I’m not good at guessing this, but I’m certain the missiles will fly somewhere.

Propagandists will push The Great Reset with increasing vigor. The oligarchs make a lot of money pushing these schemes to “save us,” mostly from bleeding the middle class.

“But Briggs,” you may be thinking. “It was bad under Obama, but not that bad. Why isn’t this just more of the same?”

Because we’re a lot woker now than then. Because the left will be out for revenge because of Trump. Because knowing they stole the election, and got away with it, will embolden them to future feats of felony. Because “immigration” will turn from flood to tsunami.

Perhaps worst of all: We will never trust another US election. America will be open game. Every elite everywhere will know what happened. And they will know that we let it happen.