Forty years ago today, an assassin’s bullet nearly took the life of President Reagan. The bullet one man meant to kill him instead served as God's call to mission. 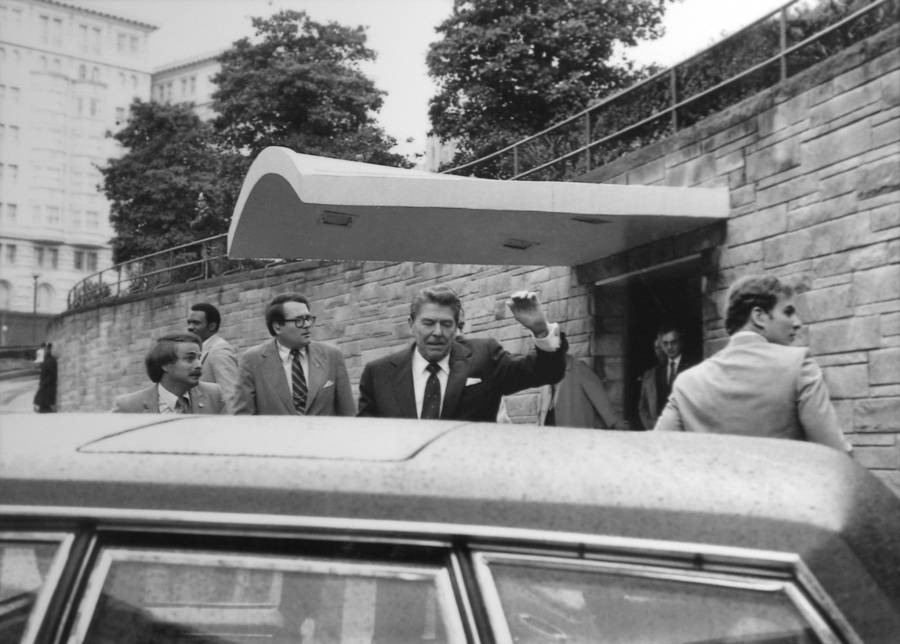 I was on the Washington Beltway heading home from class when the first flash came across the radio. Someone had opened fire outside the hotel where the new president, Ronald Reagan, had been speaking. Thankfully, said the local DJ, the president had not been hit. I hadn’t voted for him, but I won’t forget my sigh of relief.

The good news soon soured, as more details came in. There were other people down.

By the time I got home, and flipped on the television the awful truth was there in living color. Press Secretary Jim Brady was face down with a gunshot to the head, Secret Service agent Timothy McCarthy lay bleeding. DC police officer Thomas Delahanty was also crumpled on the sidewalk. And the greatest shock of all: Contrary to those early reports, President Ronald Reagan had, in fact, been hit and was being rushed into surgery at George Washington University Hospital.

Like much of America, I remained glued to the TV the rest of the afternoon and into the night. Over and over, the TV stations replayed news footage of the assassination attempt, as anchors and reporters scrambled for any information. Or misinformation.

At one point, all three broadcast networks reported that Press Secretary Brady was dead. … only to retract that a few minutes later. ABC News anchor Frank Reynolds — a close friend of Brady’s — was enraged and embarrassed at having broadcast the erroneous report. (Yes, children, there was a time, when news anchors would be angered and shamed if they got a story wrong.)

The video remains shocking. Reagan had concluded a lunchtime address to the AFL-CIO at the Washington Hilton. He was exiting the hotel, set to get in his limo, cheerfully waving to the crowd of people and media cramming the sidewalk close to him. “Far too close,” one cameraman recounted thinking.

Suddenly came the loud popping of several shots, six in all. Down went Brady. Officer Delahanty, hearing the first shot, turned toward the shooter, and got hit in the neck. As Secret Service agents shoved Reagan into the limo, Agent McCarthy threw himself into the line of fire, spreading his arms and legs wide to shield the president and took a bullet in the abdomen. The final shot ricocheted off the limo, through the space between the open read door and vehicle frame, hitting the president.

Reagan himself didn’t think he was shot, believing he’d merely cracked a rib when shoved in his limo. But as the car raced toward the White House, Reagan began coughing up blood. A cut lip, the president thought. No, concluded the Secret Service agent checking him for wounds. This was worse. He ordered the limo to divert to George Washington University Hospital … a decision that would save Reagan’s life.

We the People would get little snippets of the hospital story. How Reagan walked casually into the hospital under his own power. How The Gipper told his wife Nancy, “Honey, I forgot to duck.” How the President joked with the surgeons, “I hope you are all Republicans.” To which the chief surgeon replied, “Mr. President, today we are all Republicans.”

What we didn’t know that day was just how close Ronald Reagan came to losing his life. The bullet had entered under his left arm, gone through his lung and was lodged less than an inch from his heart. Ronald Reagan very nearly bled out.

Meanwhile, the White House was in chaos. Vice President George H. W. Bush was in Texas. Relying on the initial report that Reagan was unhurt, he’d gone on to deliver a speech in Austin. Bush was now racing back to Washington. With Reagan in surgery and Bush in the air, Secretary of State General Alexander Haig thought it would be a good idea for someone to go before the cameras to ensure the American people their government was still functioning. And he would be that someone. Well, it was a good idea until he famously declared “I am in control” and made a mess of the Constitution in the process.

It’s hard to come up with a moment in American history that was at once as absurd and terrifying.

A possible runner-up is the motive of the shooter. John Hinkley was a mentally disturbed young man from a well-to-do Colorado family. He had nothing personal against Reagan. No political ax to grind. He just wanted to impress actress Jodie Foster. Foster had been a child star, playing a 12-year-old hooker in the classic Taxi Driver. In the film, the psychotic anti-hero brilliantly played by Robert DeNiro had shot a politician in the effort to protect the character Foster was playing. But in 1981, Foster was far from Hollywood, a full-time student at Yale. Still, an obsessed Hinkley spent weeks on Yale’s New Haven campus in an effort to get close to Foster. He never got the nerve to approach her.

Weeks before the assassination attempt, Hinkley left a note tucked under Foster’s dorm room door, “Besides my shyness, I honestly did not wish to bother YOU With my constant presence.” So he’d come up with a less intrusive way to gain her attention, earn her love: Kill the President of the United States.

However, what man meant for twisted romance, God meant for good.

The emergency surgery on President Reagan succeeded. His life had been saved. He was on the path to recovery. Who wasn’t glad to see The Gipper wave from his hospital window! 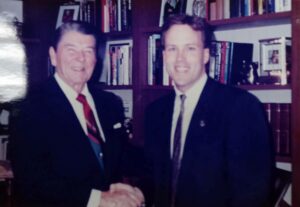 Jacobson was sitting in the third row at Reagan’s first meeting with his presidential appointees after leaving the hospital. Bruce tells The Stream that at this meeting of the Senior Executive Service Forum, Reagan was full of emotion, looking down at the table, tears forming in his eyes.

“I believe God spared my life for a divine purpose,” said Reagan.

“Literally made my heart come up out of my throat,” says Jacobson. “Almost like a religious experience.”

Jacobson and his colleagues knew they’d signed on for an important task when joining the Reagan Administration. But hearing Reagan declare he’d been spared by God “even made the call greater.” Says Bruce, it sparked a sense of “divine mission.”

Mere weeks later, Pope John Paul II would also barely survive an assassination attempt. He, too, was convinced God had spared him for a special assignment. Stream writer Prof. Paul Kengor served as writer on a film linking these two assassination efforts, and the fall of the Soviet Union a decade later after the efforts of John Paul II and President Reagan. The survival of these two men turned out to be the miracle that set hundreds of millions of captives free.

Meanwhile, at home, the man who’d nearly died brought America back to life, restoring that “shining city on a hill.”