The Dark Side of the ‘Good War’

A review of Peter Hitchens' The Phoney Victory. 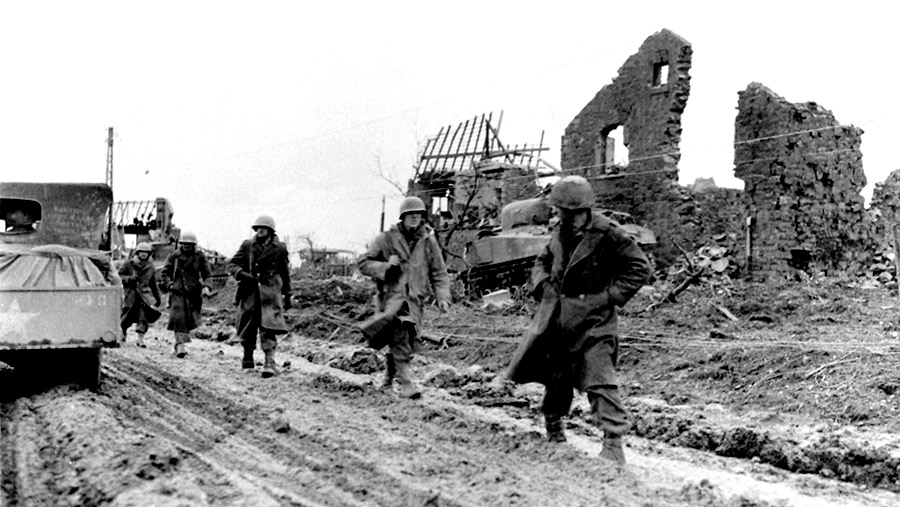 We all like to joke about how the History Channel is really the Hitler Channel. (By the way, that’s out of date; it’s now the Ancient Aliens and Aquatic Apes Channel.) That’s a truth said in jest. It points to the enduring power of the Second World War. Want to buy a man a gift? A World War II book or movie is always a safe bet. Want to tell a story about good and evil? Set it in Nazi-era Europe, and you won’t be short of villains.

The Myth We Live By

This points to the fact the World War II is our greatest modern mythos. I use that term instead of the interchangeable “myth” so as not to mislead people. Or give any grist for the mills of slander-mongers like the theologians who wrote at Commonweal, accusing Trump-allied Christians of being Nazi stooges.

I am not one of the deniers. I firmly believe, based on overwhelming evidence, that the Second World War occurred. So, alas, did the Nazi Holocaust.

I once knew someone who fell into the cult that denies the latter. I’d torment him by raising doubts about the former, using his very own “arguments” to suggest that in fact “Germany” had never existed, either, but was the crass invention of scheming “Zionist shills.” I stopped trying to win that fellow over, eventually, when he blundered into Satanism. Boy, I’m glad he left the Latin Mass seminary first! We’re no longer in touch. …

Some might say that I digress. But no. Discussions of World War II, really tough and probing discussions, can be risky. That’s true in part for one excellent reason. There is a small, sad segment of haters out there, who briefly try to spike their testosterone counts by embracing views that are rightly taboo among decent people. Let’s shove such cranks aside, though. There is a long list of tough questions we do need to ask ourselves about the so-called “Good War.” Not because we have the slightest particle of sympathy for Nazi barbarians, or Bushido butchers. No, we need to do so, as Peter Hitchens explains in his brilliant, sobering book The Phoney Victory, for some other important reasons.

As Hitchens notes in the gripping, carefully documented book, nobody thinks of World War I as a “good war.” We see it as a futile, wasteful sacrifice of millions and millions of lives by reckless politicians. We often try to forget it, and when it comes up for mention, the tone’s always one of mourning.

Hitchens grew up in a post-war Britain that relied for its sense of national greatness on its survival in World War II. As he notes, the commemoration of Britain’s battles against the Nazis became a kind of ersatz religion, filling in the gap made by a vanishing Anglicanism. The official story about appeasement helped make things easier for every reckless politician urging a new war, like the one in Iraq.

Hitchens comes as the unwanted messenger to tell us that, especially for Britain, World War II was much more like World War I than anyone wants to admit. Not, emphatically not, that the stakes in the wars were precisely the same. In World War I, no regime (except the Ottoman Turks) was engaging in genocide. None of the participants held to destructive, Utopian ideologies. Whatever atrocities accompanied combat, outside the Ottoman empire, nobody was hunting women and children because of their race.

Archbishop Fulton J. Sheen said that our willingness to obliterate civilians using bombs without any scruple laid the groundwork for legal abortion.

Hitchens agrees with every morally sound observer that the Nazis had to be fought. But he questions, in close historical detail, how and when the Allies chose to fight him. He pokes at the cozy accepted narrative of the build-up to World War II, which I’ll sum up below:

The British and French foolishly appeased the Nazis up through Munich, then finally took a solid moral stand by guaranteeing Poland. The British were nearly defeated by the Nazi Blitz, but narrowly escaped a German invasion thanks to the skill of the RAF. Then they doggedly fought crucial battles all over the Mediterranean, preventing the catastrophe of German conquest of the Suez Canal. Meanwhile, over in Asia, British incompetence and cowardice allowed Japanese conquests.

The U.S. lived up to its part of its “special relationship” with Britain by generously aiding it while America geared up for war. As they prepared for a Western front, they foreshortened the war by bombing German cities, a just and necessary measure to cripple the Nazi war effort. Then at the war’s end, the Allies liberated the concentration camps, and put a swift end to the genocidal deportation of peoples. We had, after all, launched the war to put an end to the Nazi Holocaust.

There isn’t space here to lay out how Hitchens does it, but he challenges the veracity of every one of those claims. In careful, melancholy, morally serious chapters, Hitchens exposes a very different war. One much more like the grim, ambiguous farce-cum-tragedy that Evelyn Waugh depicted in his brilliant Sword of Honour trilogy. Hitchens’ narrative does a much better job of explaining why if World War II was such a triumph for Britain, its inhabitants ended up feeling so miserable and diminished. Remember that Orwell based 1984 on the grim material conditions in (victorious!) Britain in 1948.

Hitchens’ strongest argument is that the guarantee of Poland was both cynical and stupid. (Here he agrees with the otherwise quite different thesis of the equally interesting book by Patrick Buchanan on World War II, which I reviewed here.) The British and French had no capacity to defend Poland, and never intended to fight for it. As indeed, they didn’t. They used the Poles to create a trigger for a war they’d finally figured out they couldn’t appease their way out of. And they needed the Nazis to strike the first blow, for the sake of public opinion. So they offered their guarantee to the Poles to prevent them making a deal with the Germans, against the Soviets. The price Poland paid for that? Almost a fourth of the country’s population dead, by the end of the war. And a Soviet regime occupying it.

What the Allies didn’t expect? That Satanic masterstroke, the Nazi-Soviet Pact. By making the two huge totalitarian regimes of Eurasia effective allies, Hitler scrambled the Western Allies’ Plan A. They didn’t have a Plan B.

They wouldn’t develop one until the Wehrmacht sat in Paris and the British army sat in ruins at Dunkirk. Plan B, as it developed, amounted to turning over the whole war to American and Soviet control. Britain’s leaders had committed to war against Germany in order to save its empire and status as a great power. But they had to sacrifice both of those, and any real influence over the war’s final outcome, just to save British independence. That was how badly British leaders had muffed the build-up to war.

Furthermore, the Nazi Holocaust of the Jews was never any part of the reason why any country went to war against Germany. In fact, most of the Allies showed virtually no concern for the safety of Jews in the course of the war. Some of their policies, like Britain blocking the travel of Jewish refugees to Palestine, made the Holocaust worse. No Allied bombs fell on the tracks connecting death camps with Jewish ghettos.

Not exactly the heroic narrative which we like to dwell on, with its stories of beating the Blitz.

Hitchens is coldly honest about how the U.S. bargained hard for every ton of aid we ever sent Britain. And how American politicians guaranteed that we, not Brittania, would come to rule the waves. He shows how Churchill’s obsession with the Mediterranean front was mostly a waste of lives. Meanwhile, Churchill starved British forces in the Pacific of any chance of resisting Japan. The complete British collapse that resulted doomed the British Empire to a hasty, ignominious, and bloody collapse. That included the ghastly partition of India.

Hitches also highlights the profound cynicism and military uselessness of the savage Allied bombing of German civilians instead of military targets. Attacks such as those on Hamburg and Dresden, he argues, did nothing to shorten the war. But they did coarsen the moral sentiments of Western democracies. Here he echoes the view expressed by Archbishop Fulton J. Sheen.

That patriotic, conservative prelate said that our willingness to obliterate civilians without any scruple laid the groundwork for legal abortion. It’s a tough argument to hear, but we shouldn’t dismiss it. Once you’ve agreed that it’s okay to kill the innocent on purpose to achieve some important goal … where do you stop?

Given that the same victorious democracies that proudly expelled the Nazis in 1945 are one after another embracing Nazi policies such as abortion and euthanasia? Our answer, so far, has been: Nowhere. We do whatever we want, as if God were merely … a myth.

‘They Shall Not Grow Old’ is a Powerful, Beautiful Picture of the Ugliness of War

America’s Betrayal of the Kurds: The New Munich Surrender