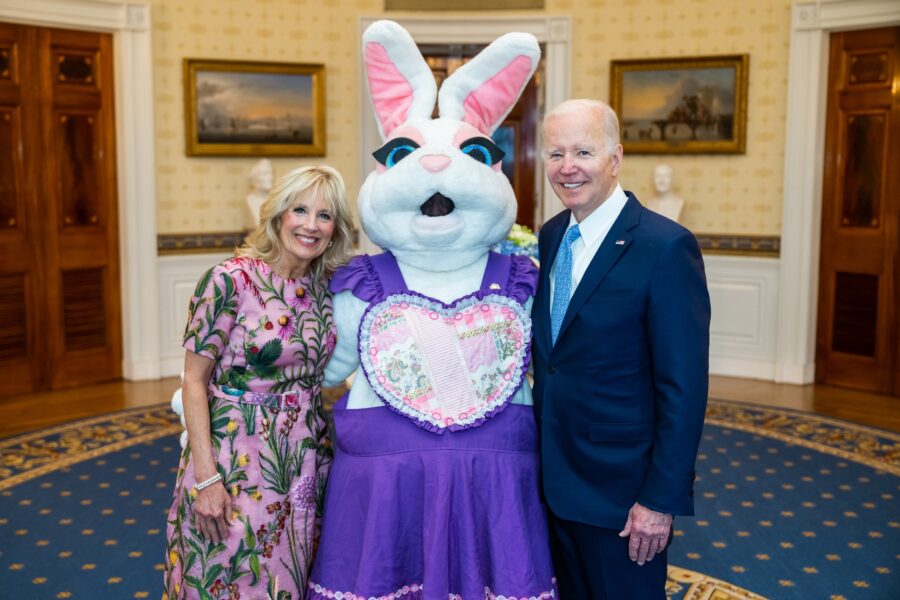 Jill Biden, the Leader of the Free World, and the former Vice President in the Oval Office prior to the 2022 White House Easter Egg Roll.

Today is Garlic Day … the least favorite holiday of vampires.

But there’s no holiday for White House staffers trying to protect Joe Biden from embarrassing himself. Who only end up humiliating him further.

As a patriotic citizen, there are a few things one never wants to see: Our flag desecrated, our soldiers dishonored … and our president manhandled by the Easter Bunny.

Yesterday, at the annual White House Easter Egg Roll, Joe Biden was starting to chat with reporters about Afghanistan and Pakistan. Suddenly, the Easter Bunny hops up, pulls Biden away from the reporters and shoos him back across the lawn. Watch the clip. It’s not like the Easter Bunny needed Joe for some bit of festivity. The Easter Bunny stays put.

The Easter Bunny is forced to usher Biden away. pic.twitter.com/2VDxdGRCW7

The Easter Bunny is now ordering the President of the United States around. Then again, perhaps the Easter Bunny has always been in charge at the Biden White House. Good a guess as any.

Actually, Alex Gangitano, White House correspondent for The Hill reports that Meghan Hays, special assistant to the president and director of message planning, was one of the two bunnies at the event.

Another White House aide in the communications office, Angela Perez, appears to have tweeted out that she was the other bunny.

This is too much for Meghan McCain.

The absolute distrust and disrespect our Presidents staff has for him and his capabilities to lead and speak in public is disgraceful.

Shame on his team, shame on them.

Why are they treating him like this? Because all this does is alarm the American public watching this. https://t.co/zhzY9Gp5CT

Meanwhile, further proof we are in a dire situation with Biden’s mental health. The Egg Roll began with Jill Biden ordering her husband to wave to the crowd.

You wanna laugh at this, but you have to ask, “Just how much further does Biden have to embarrass himself for his wife to say ‘enough’?” Please tell us what the line is, Jill. Because clearly, shaking the hands of people who aren’t there, speaking incoherently, and being handled by the Easter Bunny isn’t enough.

Finally. The Biden Administration’s order to extend the travel mask mandate to May 3 was shot down Monday by a federal judge in Florida.

The suit against the travel mandate was originally filed in July 2021 by the Health Freedom Defense Fund.

“It is indisputable that the public has a strong interest in combating the spread of Covid-19,” Mizelle wrote in her decision. “But the mandate exceeded the CDC statutory authority, improperly invoked the good cause exception to notice and comment rulemaking, and failed to adequately explain its decisions. Because our system does not permit agencies to act unlawfully even in the pursuit of desirable ends, the court declares unlawful and vacates the mask mandate.”

The Easter Bunny didn’t say if the Administration would appeal the ruling.

Ilhan Omar, the Minnesota congresswoman who counts terrorists among her friends and thinks 9/11 was just “some people doing some things,” has a new gripe.

Seems she’s upset by a video from Kingdom Realm Ministries showing Christians singing on an EasyJet flight on April 9. The video is called “Worshiping Jesus 30,000 feet in the air.”

Ilhan carped on Twitter: “I think my family and I should have a prayer session next time I’m on a plane. How do you think it will end?”

Depends. Are you in tune? Are people trying to sleep?

I think my family and I should have a prayer session next time I am on a plane. How do you think it will end? pic.twitter.com/5696Erwsl5

Allie Beth Stuckey responded to Omar. “I don’t know, but it’s gotta be better than the reaction to Christian worship in her home country of Somalia, where Christians are slaughtered for praying in public.”

Ilhan Omar asks how people would react if her Muslim family sang their worship songs on a plane. I don’t know, but it’s gotta be better than the reaction to Christian worship in her home country of Somalia, where Christians are slaughtered for praying in public.

By the way, you notice the second best thing about that video? No masks.

The state of Florida has rejected 54 math books vying for use in public schools … or 41% of the books submitted. The textbooks rejected “were impermissible with either Florida’s new standards or contained prohibited topics.” For example, some of the books pushed critical race ideology. Yes, CRT in math books.

More disturbing: according to Fox News most of the books pushing ideology were aimed at K-5 students.

I mean, the quiz questions should have been the first clue.

“Five-year-old Marcia and LaKeesha open a lemonade stand. They charge 25 cents per cup of lemonade. How many cups will they sell before LaKeesha recognizes she’s oppressed by Marcia.”

April 19: An Anniversary of Tragedies

Today’s the 29th anniversary of the Waco siege coming to its disastrous, tragic end. 75 Branch Davidians, including 18 children died. Safety tip: launching pyrotechnic tear gas canisters in and onto a tinderbox of a building on a blustery spring day is never going to end well. Hiding the fact that the military M-651 projectiles were used in the first place, as a House investigation found in 2000, doesn’t help either.

Exactly two years later, the Federal Building in Oklahoma City was bombed. Convicted bombers Timothy McVeigh and Terry Nichols claimed to be motivated in part by the Federal government’s actions at Waco.

We pray no one uses the anniversaries for any mischief.

I’m not crying. You’re crying. Marissa Hays, formerly of LIFE Today, has gifted us with a beautiful remembrance of her father, who passed away suddenly when she was a little girl … and steps she took in her grief toward “My Forever Father.”  So beautiful. So, so beautiful.