Meanwhile, Joe Biden says he has "no response" to damning allegations of corruption. 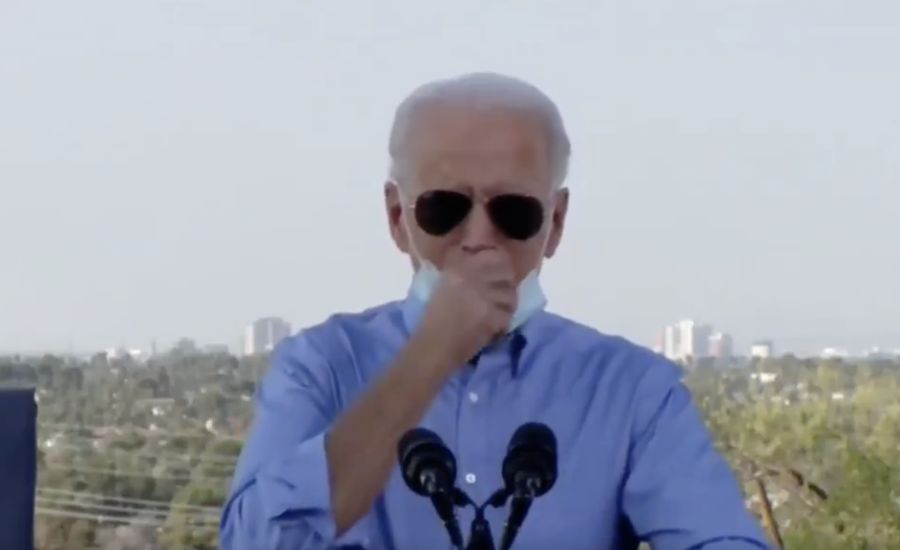 Joe Biden was on the take. Paid by Communist Chinese while serving as Vice President of the United State and in charge of policy toward China. That is the only rational conclusion when considering newly released emails and documents.

The story is very simple. Hunter Biden worked a lucrative deal with a Chinese energy giant chock full of members of the Chinese Communist Party. Hunter would get his 20% cut, and someone called “the big guy” got 10%. The “big guy,” sources say, was Joe Biden.

This is but one of the stunning stories of corruption and payoffs and pay-to-play that have emerged in recent days, starting with the shocking revelations by the New York Post. Stories so damaging (and irrefutable), Facebook and Twitter launched a massive effort to stop the story from being shared. Twitter finally relented, so you can now share it to your heart’s content: (Here’s the link to the initial censored story: https://nypost.com/2020/10/14/email-reveals-how-hunter-biden-introduced-ukrainian-biz-man-to-dad/)

And Joe Biden’s response last night when finally asked about the emerging scandals? “No response.” He called it a “smear campaign” and nearly bit the head off the CBS reporter.

Remuneration Packages for the Bidens

Fox News got hold of an email dated May 13, 2017 that includes discussions of “remuneration packages” for six people engaged in a business deal with China’s then-largest private energy company. Hunter Biden was scheduled to be chair or vice-chair of the venture, “pending on agreement with CECF.” (Apparently a reference to the now-bankrupt CEFC China Energy Co.)

The Post first reported on the email detailing the proposed equity split, earmarking “20 for H” and “10 held by H for the big guy?” One of the people on the email confirmed its authenticity to Fox News. And sources tell Fox News “the big guy” was, indeed, Vice President Biden.

See here for the emails: https://nypost.com/2020/10/15/emails-reveal-how-hunter-biden-tried-to-cash-in-big-with-chinese-firm/

According to the New York Post, as he pursued deals with CECF, Hunter Biden wrote of one that would be “interesting to me and my family.”

Who do you think “family” refers to, when you’re talking deals with the Chinese, when Joe Biden is VP and heading US policy on China?

One of the deals Hunter arranged with CEFC chairman Ye Jianming was half-ownership of a holding company that would pay Hunter $10 million a year.

Hunter explains in an email that Ye sweetened the contract so he would get $10 million a year “for introductions alone.”  Now, I’m sure Hunter’s daughters are lovely, but a Chinese businessman with ties to the Chinese military and intelligence service isn’t forking over $10 million a year to meet them.

Speaking of “the big guy” and Hunter Biden’s daughters, in a text released by Rudy Giuliani, Hunter assures one of his daughters “Don’t worry. Unlike Pop, I won’t take half your salary.” Yep. According to Hunter, Joe took half of whatever Hunter earned for decades.

Dear Biden voter, don’t you think it is vital to know if, in this specific case, Joe Biden was paid $5 million a year by the Chinese, via Hunter, while he was overseeing Chinese policy?

We’d ask Ye Jianming himself, but Chinese authorities grabbed him in 2018 and he hasn’t been seen since. (Convenient for Joe now, huh?)

Another little tidbit from innercitypress.com. It came out during the corruption trial of a Ye associate that Ye gave Hunter a $2.6 million diamond for Hunter’s help gaining access to the UN World Food Programme. Biden was on the board of World Food Program USA.  No word yet on whether Hunter had to split the diamond with his dad.

A Profitable Pattern of Corruption

Of course, all these new revelations are on top of the already known story of Hunter being given $1.5 billion by the Chinese for a hedge fund, right after VP Biden flew over to Beijing with Hunter in tow. (And remember, Olympic gymnasts can’t bend so far over backwards as Joe Biden did for China.)

And this doesn’t even touch the Ukrainian business. For a brief refresh:

Now, remember the FBI was given Hunter Biden’s laptop, with all the emails and documentations of his Ukraine (and Chinese) dealings in December 2019. One vexing question is why the FBI didn’t come forward with the information during the impeachment. After all, the President of the United States was on trial simply for asking Ukraine to look into those very Ukrainian activities. Why was the FBI protecting Biden and not helping clear the President?

Biden Blows Up When Asked About The Scandal

Remarkably, Biden was not asked about any of this at his ABC Town Hall Thursday night. Journalistic malpractice of the highest order. Finally, last night outside his campaign plane, Biden was asked by CBS reporter Bo Erickson for his response to the NY Post stories. Biden snapped. “I know you’d ask it. I have no response, it’s another smear campaign, right up your alley, those are the questions you always ask.”

I asked Joe Biden: What is your response to the NYPost story about your son, sir?

He called it a “smear campaign” and then went after me. “I know you’d ask it. I have no response, it’s another smear campaign, right up your alley, those are the questions you always ask.” pic.twitter.com/Eo6VD4TqxD

In 1973 President Nixon famously said, “people have got to know whether their president is a crook. I am not a crook.” We know how that turned out.

We are 16 days from the Presidential Election.  One that’ll decide the fate of the country. One that will determine whether the 21st Century belongs to the Chinese or remains one of American greatness.

Right now, at this crucial historic moment, the American people must know whether the presidential candidate leading the polls is a crook.

With his answer last night, Joe Biden is saying we don’t deserve to know.