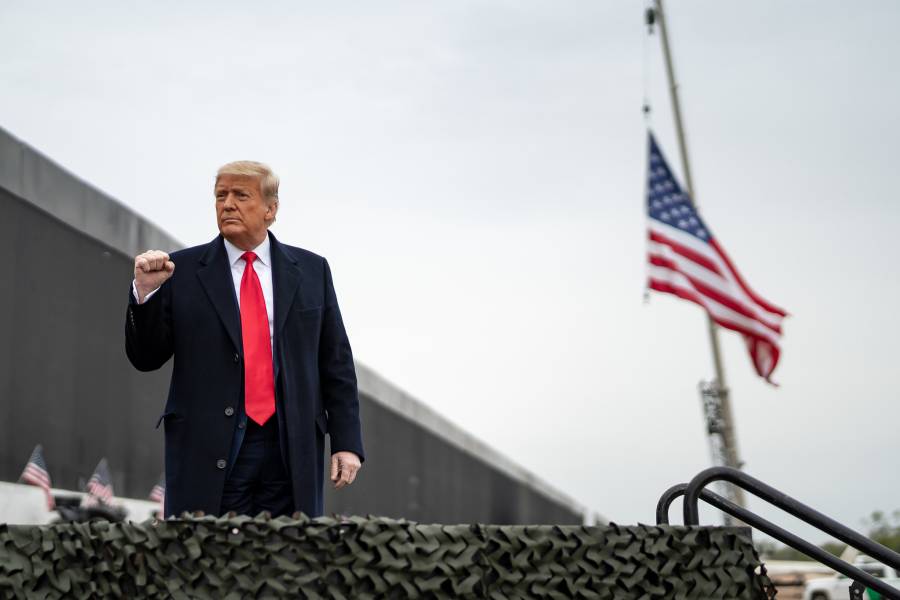 President Donald J. Trump concludes his remarks at the 450th mile of the new border wall Tuesday, Jan. 12, 2021, near the Texas-Mexico border. This is his last public appearance before departing the White House.

Thanks to Donald Trump’s Operation Warp Speed, Middle East peace deals, elimination of ISIS caliphate, Right to Try, fixing of the VA hospital system, and full-throated fight against abortion, millions more people will be alive to hear Never Trumpers tell them what an awful person he was.

The Forces Against Trump

It will stand as one of the great miracles of America that Donald Trump was able to get so much done, big and small, so much winning, to use his term despite:

The American people, because the mainstream media had zero interest in reporting the good, generally have little idea of all that Trump accomplished in their name.

A few months back, Wayne Grudem published on The Stream a list of “30 Good Things President Trump Has Done for America.”

This week, the White House put out a staggering list of Trump administration accomplishments.

Look through the seemingly endless list, and ask yourself, “How much has all this benefited me, my family, my community, my nation?”

Ask then the fundamental question: “Did he do the job he was elected and paid to do?” Any answer less than a “Yes” is a lie.

Doesn’t he deserve at least a thank you?

Let me put this another way. The great advantage of being a Trump hater is you have been able to reap the benefits of his presidency — Peace, Prosperity, Opportunity — while labeling him the devil.

Those who did not vote for Biden will have no such luxury. Already there is open war against Trump supporters. Already Iran, China and North Korea are saber rattling. Prosperity? Gas prices are already on the rise and Biden is vowing to reverse many of the policies that bring prosperity and implement policies that choke American business. Opportunity? Already the move is afoot to deny employment to those who worked for Trump. Trump supporters are purged from woke corporations. Trump supporters have now been labeled by the incoming regime as racists, white nationalists and domestic terrorists.

I am already resigned to the fact that my writings and working for a man who was/is a spiritual advisor to Donald Trump would make me a toxic hire should I move home in the D.C. area. I assume certain publishers would want no part of my non-political murder mystery simply because I don’t believe a senile corrupt hack who finished fifth in New Hampshire, and spent the summer in his basement, legitimately garnered 80 million votes. I accept certain dear friends are now gone forever, incapable of seeing me as anything more than a wretched Deplorable.

However, if the choice is between being tossed aside by longtime friends, and seeing our nation’s enemies weakened, I choose America’s security.

If the choice is between being denied a job and knowing millions of forgotten men and women were able to get jobs, thanks to Trump’s efforts, I’ll go with the millions.

If the choice is between a murder mystery struggling to get published and Middle East peace, I choose peace. A thousand times peace!

If History is to Be Fair

If history is to be anywhere near fair, it will marvel at all Trump got done on behalf of the American people. It will condemn the forces that fought hook and crook against him. It will brand as true seditionists those who used the full power of the CIA, FBI and DOJ to sabotage the duly elected President of the United States.

It will reflect with wonder a unique, jam-packed, energetic time where the most unlikely of presidents proved Washington need not be stuck in neutral. Who proved blessings were to be found when one pushed practical solutions and put the American people first. Who indeed did Make America Great Again.

If history is to be in anyway curious, it would wonder why the unending hatred for a man who did nothing more than set aside his riches and ease to work nonstop to solve problems he had no hand in creating.

Al Perrotta is the Managing Editor of The Stream and co-author, with John Zmirak, of The Politically Incorrect Guide to Immigration. You can follow him at @StreamingAl on Twitter and Parler (when allowed) and at Gab and MeWe.