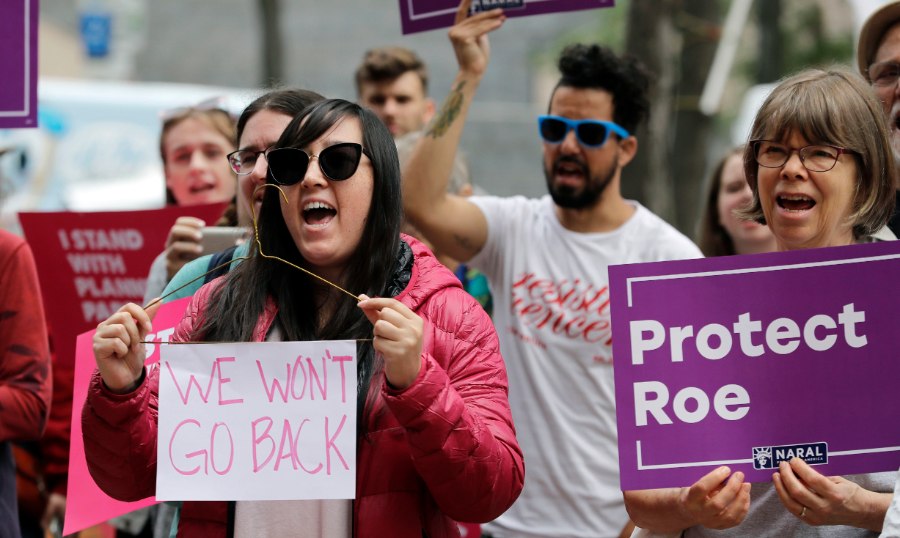 In this July 10, 2018, file photo, demonstrators take part in a pro-abortion protest in Seattle.

Listen to how Teen Vogue — Teen Vogue! — describes abortion advocacy in this op-ed about “how the Lady Parts Justice League [a group of comedian activists] is taking down anti-abortion sentiment through a comedy tour.”

What makes Lady Parts Justice League critical in the current political moment is their ability to push both anti-abortion and pro-choice advocates to be unapologetically supportive of women that choose to obtain abortions, no matter what their reasons….

To be pro-abortion is to face your own potential internalized stigma and recognize that abortion should not be exclusively about access, but about normalizing a medical procedure and life process. It does not mean you hope that every person has an abortion, but it means you advocate for the existence of abortion, not just its accessibility. It’s kind of like being pro-bypass surgery: we love its existence, we appreciate the options it offers people, we aren’t hoping our loved ones have to have one anytime soon. [Emphasis added.]

One of the goals of the Lady Parts Justice League, according to this op-ed, is to “fight anti-abortion stigma.” They want to move the culture away from expecting women to only have abortions for reasons that society deems “respectable”; and they believe that when abortion-choice advocates focus on abortion narratives that involve women having to make decisions to abort due to some sort of hardship, they’re playing into the false narrative that abortion is harmful and/or needs to be justified.

Within contemporary pro-choice and anti-choice narratives, the abortion stories that are normalized in our cultural consciousness are ones that are engineered to engender the most sympathy. …

[T]he danger of only amplifying this specific narrative is that it becomes the dominant one, allowing for anti-choice ideologies to exploit that emotion and present abortion as predominantly emotionally disruptive for people. Although a “good” or “accepted” choice can be in relation to economic welfare or personal safety, this narrative does not allow for a good choice on the basis of self-interest. [Emphasis added.]

I bring this op-ed to your attention for a couple of reasons. First, the message being given to your children by our culture has moved from the regretful necessity of abortion to the goodness of abortion. There is currently an intentional effort to convince people there’s no need for any woman to justify her decision to have an abortion because it’s simply not the kind of thing that needs to be justified. It’s merely a “medical procedure,” nothing more. You will need to address this strategy with your children so they’ll recognize it when they see it and understand why it is grievously wrong.

Second, now, more than ever, you need to be ready to engage people like those involved with the Lady Parts Justice League. Are you ready to speak persuasively to them with patience, grace and love? Or do you fear them — or even hate them? Increasing your confidence in your ability to articulate the pro-life message (that is, the full humanity of the unborn and their right to not be killed) will increase your ability to have compassionate, reasoned conversations with abortion advocates that won’t degenerate into anger and insults. Here’s a place to start: “Pro-Life Crash Course.”

How IVF is Changing Our View of Human Beings