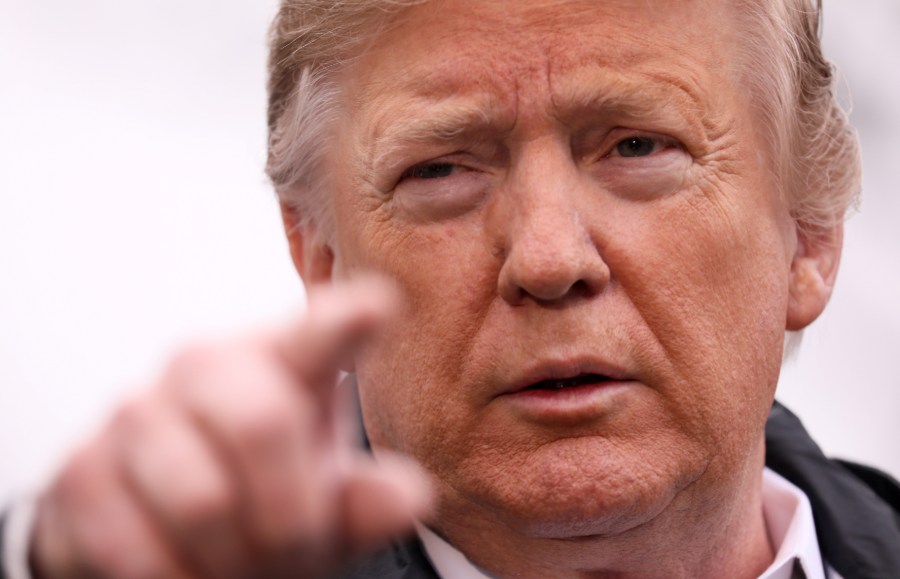 President Donald Trump again dropped the T-bomb last night in talking about the high level FBI and DOJ officials who tried to subvert his presidency. Treason.

“You had dirty cops, you had people who are bad FBI folks,” he told Sean Hannity. “At the top they were not clean, to put it mildly. We can never allow these treasonous acts to happen to another president.”

He specifically cited those involved in what Peter Strzok called the “insurance policy” against him winning. “It was treason, it was really treason.”

Normally, you have to listen to Trump through the Trump filter — the great New York/New Jersey tradition of talking extremes. Everything is either the worst or the best. He owns the best resorts in the world. The Iran nuke deal was the worst deal ever. George Conway is the worst. Kellyanne Conway is the greatest. That’s Trump. So the crimes committed against him — and make no mistake, crimes were committed — would be the worst they could be. And that would be treason.

Also, given how freely his enemies in the media and in the Democratic Party (but I’m being redundant) have thrown the term around the past two years, you can understand the temptation to play tit-for-tat.

However, when the President of the United States accuses people of treason, that is very serious business. That is not something that can be uttered as Trump-speak or Trump-payback.

As Sarah Sanders reminded people Monday, “That’s punishable by death in this country.” That’s not a rousing “Lock Her Up!” That’s an ominous “Execute Her.”

Ergo, we must move gentle. Treason is our most heinous crime. It is life or death. So the question today is, “Is President Trump serious or is he sprouting another crazy idea?”

Perhaps the best way to answer is “It’s just as crazy as when he tweeted that Obama had wiretapped him.” Now we know. The Obama Administration was conducting surveillance on Trump and his campaign. The FBI had launched at least two counter-intelligence investigations against him. And we know the whole thing was a set-up. A set-up from high-up.

John Brennan Squashed While Trying to Throw Others Under the Bus

Former CIA Director John Brennan has been leading the charge. Brennan called Trump “treasonous” after his meeting with Vladimir Putin. From his perch at MSNBC, and with the weight of having been the nation’s top spook, Brennan was relentless in assuring the public of Trump’s Russian guilt. Practically guaranteeing prison for Trump and his kids. His Twitter was filled with predictions of the evil Trump’s doom when the evidence he knew was fully revealed.

In May 2017, Brennan testified under oath before Congress, “I encountered and am aware of information and intelligence that revealed contacts and interactions between Russian officials and U.S. persons involved in the Trump campaign.” He was “concerned.” “It raised questions in my mind … whether or not the Russians were ever able to gain cooperation of those individuals.”

Behind the scenes, he was even more aggressive, pushing then-Senate Minority Leader Harry Reid to push the Trump-as-Putin-Crony narrative. As The American Spectator reported in January, “Reid has bluntly told reporters that Brennan sought him out as the conduit for a crippling leak against Trump during the campaign: ‘Why do you think he called me?'”

Reid told the authors of the book Russian Roulette he was struck by Brennan’s “ulterior motive.” As David Corn and Michael Isikoff wrote, Reid “had concluded the CIA chief believed the public needed to know about the Russian operation, including the information about the possible links to the Trump campaign.” (If this notion of the public needing to know sounds familiar, it is, as we’ll see below.)

The Bombshell on Brennan

It gets worse. Last night, Sen. Rand Paul dropped a bombshell on Brennan.

BREAKING: A high-level source tells me it was Brennan who insisted that the unverified and fake Steele dossier be included in the Intelligence Report… Brennan should be asked to testify under oath in Congress ASAP.

Yes, if true, DCNF reports, John Brennan “was the force behind the infamous Steele dossier being included in an intelligence report that ordered surveillance on then-presidential candidate Donald Trump and his campaign team.” (Not incidentally, as American Spectator‘s article noted, Brennan had told Congress under oath he knew nothing about the Dossier.)

How interesting a “high-level source” ran to Sen. Paul the day after Brennan told MSNBC, “Well, I don’t know if I received bad information, but I think I suspected there was more than there actually was.” The other day I wrote:

What we do know is stuff is hitting the fan with the DOJ and FBI. We’ve already described how Lisa Page and Andrew McCabe pointed fingers at the Obama Justice Department for the Clinton Investigation. Is DOJ going to take the fall for Russia too? Who are they going to point to? Will the FBI take the fall for the FISA abuse? For the Russia hoax?

No. Of course not. Ultimately, they’re going to point to the Obama White House and John Brennan, former director of the CIA. Even ABC News’ Terry Moran said Monday, “John Brennan has a lot to answer for.”

Indeed, Brennan’s comments show he is set to throw others under the bus. And those others are saying, “No way, Brennan. This is your rodeo, clown.”

The Public Needs to Know

Along these lines: Where have we heard this “the public needed to know about” Trump and Russia in connection with the CIA? From the musician (and Hillary pal) Moby … for starters.

Shortly after the Steele Dossier was made public in early January 2017, Moby blasted across his vast social media network he could “accurately” tell his fans the dossier was “100% real.” And that Trump was being “blackmailed by the Russian government.” Moby said in a 2018 interview he was told by several “current and former CIA agents” that the dossier was 100% true and Trump was a “Russian-agent of Putin,” a “Manchurian candidate.” These agents asked him to “put it out there” because he had a bigger platform than the agency.

Paul’s revelation and Reid’s experience with Brennan signal those CIA agents were not acting on their own. But acting on orders from above.

In other words, the head of the CIA was running a covert operation against newly elected President of the United States. The object: To paint him as a Russian agent. To use his own word: “Treasonous.”

Not the Only One

Yet Brennan wasn’t the only one running around town trying to spread the word about Trump-Russia collusion. We have Evelyn Farkas, a Deputy Assistant to the Secretary of the Defense under Obama, revealing how widespread the effort was to get and spread the Trump-Russia narrative. She told MSNBC’s Morning Joe in March 2017:

I was urging my former colleagues and, frankly speaking, the people on the Hill, it was more actually aimed at telling the Hill people, get as much information as you can, get as much intelligence as you can, before President Obama leaves the administration.

So I became very worried because not enough was coming out into the open and I knew that there was more. We have very good intelligence on Russia. So then I had talked to some of my former colleagues and I knew that they were trying to also help get information to the Hill.

A week before leaving office, President Obama issued an order vastly expanding NSA’s ability to share raw, warrantless data across government agencies. (This after the ACLU discovered the NSA had repeatedly violated civil liberty protections during the Obama Administration even before Obama’s last minute directive.) Obama’s order exponentially increased the risk of leaks. Or to use Power’s term, “maximum amplif.” Or to use Farkas’s term get “information out into the open.”

Add it up. Six major national officials. Six. And at least seven other high-up officials. At least thirteen powerful people, in jobs dedicated to obeying and enforcing the law, all pledged to be objective and impartial, launched a campaign designed to take down the duly elected president of the United States.

All spokes emanating from one office. The one that used to bear a sign “The Buck Stops Here.”

Rand Paul declared Wednesday that it’s time for Congress to investigate President Obama. “What did President Obama know and when? How did this hoax go on for so long unabated?”

I doubt Trump only has Lisa Page and Peter Strzok in mind when he talks about about not wanting “treasonous acts” to hit another president.

Al Perrotta is the Managing Editor of The Stream, and co-author with John Zmirak of The Politically Incorrect Guide to Immigration. You can follow him @StreamingAl.