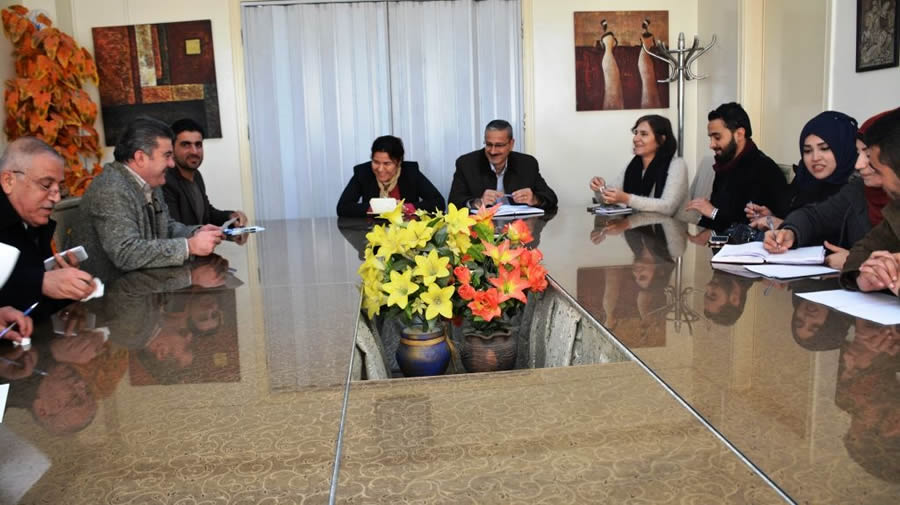 Co-Presidents of the Democratic Federation of Northern Syria Fawza Youssuf and Sanharib Barsom.

While there were protests in Washington, D.C. on the day of President Trump’s inauguration, Syriac-Assyrians of northern Syria were in a positive mood. Many of them have high hopes that the new president will bring about real change in the war on ISIS, said Johannes de Jong, Director at Christian Political Foundation for Europe.

The reason for their optimism is simple. They see a change in the political party at the White House as a possible opening to partner with a world leader in the war against ISIS. Up until now, only certain ethnic groups fighting ISIS have been provided military support, including training, equipment and weapons. The Syriac Military Council — Christians fighting ISIS — and remaining non-Arab groups wonder why they’ve been left out in the cold by the Obama administration. Now that can all change, thanks to the new president’s election.

Very early on the morning of January 19, 2017, ISIS terrorists attacked an outpost on the front line of the Syriac Military Council (SMC) near the ISIS capital of Raqqa, Syria. The SMC fighters had no night vision goggles or other equipment that would have allowed them to see ISIS terrorists in the dense morning fog.

Three SMC fighters were killed and three others were injured, de Jong told The Stream. “Sufficient equipment would have made a huge difference,” said de Jong. “It would have spared lives … one of their commanders once personally told me that he would be so happy with just night vision goggles.” With night vision and anti-tank armament, the SMC fighters would have seen the terrorists and killed them before the terrorists reached the SMC outpost, explained de Jong. “[T]he Obama administration never allowed the Pentagon to arm anyone else but … Arabs in the Syrian Democratic Forces.”

The Syrian Democratic Forces is an alliance of multi-ethnic and multi-religion militias fighting jihadist groups. It wasn’t that arming the Arabs was a bad decision, he quickly points out. “The bad decision was not arming the Syriac-Assyrians and Kurds as well.”

The remaining non-Arab people fighting ISIS in Syria hope that President Trump will change the long-standing position of the Obama administration to arm only one ethnic group.

The Democratic Federation of Northern Syria (comprised of three self-governing cantons in northern Syria, much like states in the U.S.) recently elected two co-presidents: Syriac-Assyrian Christian Sanharib Barsom and Kurdish Fawza Youssuf. That the Federation has elected a Syriac-Assyrian Christian and a Kurdish woman to lead a large independent administration of several million people in the heart of the Middle East is an indication of the Federation’s commitment to a multi-ethnic and multi-religion democratic union — one to protect fiercely.

Barsom yesterday appealed to the new U.S. President Trump to support the fighters of the Syriac Military Council and Syriac-Assyrian Christians in the endeavor to fight ISIS:

We urge the US and the new Trump Administration to include the Syriac-Assyrian Christians in the support to the SDF and no longer exclude the Syriac Military Council from support. Equally we emphasise the need to support the Kurds and Arabs in the SDF. We do not understand why Syriac-Assyrian Christians and Kurds are so far excluded from military support. We are all Syrians fighting against ISIS. The European Parliament called to support us already at 12 March 2015. With sufficient support it is for example highly likely that we would not have had so many casualties in the Syriac Military Council last week. We cannot defeat ISIS without more support.

The hope of the Syriac-Assyrian Christians is that the world finally will understand that they have to be treated equally with Kurds and Arabs in political and military terms in both Syria and Iraq in the war against ISIS and the struggle for freedom.

De Jong said that the Obama administration’s decision to only support a part of the SDF had posed a threat to those living in the Middle East and around the globe. “The decision of the previous White House administration of not arming the Syriac-Assyrian Christians and the Kurds not only had serious consequences on the front lines,” said de Jong. “but also resulted in the fact that ISIS is still around and thus was bad for the security of the US and the world.”

In a brief statement on the White House website, the Trump administration promised to work with other military groups as necessary to defeat ISIS:

Defeating ISIS and other radical Islamic terror groups will be our highest priority. To defeat and destroy these groups, we will pursue aggressive joint and coalition military operations when necessary. In addition, the Trump Administration will work with international partners to cut off funding for terrorist groups, to expand intelligence sharing, and to engage in cyberwarfare to disrupt and disable propaganda and recruiting.

The new White House administration’s official statement and change of political views has excited many Syrians about new possibilities. A Syrian Kurd named Walid Shekhi opened a new restaurant in Kobane and named it “Trump Restaurant,” in honor of the new president. “I believe that the United States under Donald Trump will provide more support to the Kurds to fight,” said Shekhi, “and eventually eliminate the Daesh [ISIS] terrorists.”