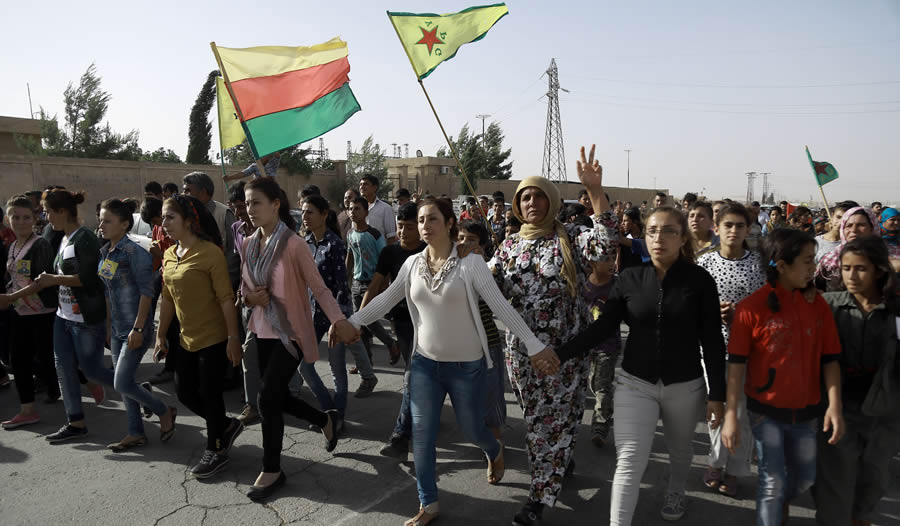 In all the noise around Donald Trump’s presidency, his “Syria Safe Zones” plan has not received the attention it deserves. It is the most sensible, safe and humanitarian option for solving the refugee crisis. Syrians even offer their cooperation to the Trump Administration. However at this moment Turkey is threatening to attack them. That attack could destroy the possibility of creating President Trump’s Safe Zones any time soon.

That would be tragic. The Safe Zones Plan puts people’s basic needs first, offering them protection from violent attack, and crucial food and medicine. Trump rightly places this as a higher priority than complex (and likely doomed) peace talks. Trump would create safe zones inside Syria where the people who are fleeing from active battle zones can find decent shelter and receive international aid.

Obviously these zones would be free of ISIS and their rival jihadists sponsored by Turkey and Saudi Arabia. Creating these zones would mean more stability in a larger part of Syria — a big step toward achieving peace. It is the right approach as it does not make the perfect the enemy of the good, but focuses on measures that will save lives immediately and reduce the zones of conflict. The gradual approach is in Syria preferable over a “grand bargain” that will likely never be reached.

The UN and Obama Ignored Real Needs of Syrians

So far efforts relating to refugees have focused on the UN Peace Talks (from which 25 percent of Syria was deliberately left out). This has created a situation in which the real needs of the Syrian were pushed aside, in favor of power politics driven by the country’s power-hungry neighbors. I have so often heard from experts that UN Peace talks must take priority over the war against ISIS, or achieving security for as many Syrians as possible.

This has created the rather schizophrenic situation in which the Obama Administration on the one hand supported the Arab elements in the Syrian Democratic Forces (SDF) in the war against ISIS, while permitting the Turks to cripple the peaceful, tolerant government that backs the SDC with a harsh  economic boycott. So the soldiers in the SDF who defend Christian Syrians and others from genocide do get limited air support, arms, and ammunition — while making do with inadequate food and medicine.

In the Federation of Northern Syria, Kurds and Arabs, Christians and Muslims, cooperate in fighting ISIS and protecting a diverse population in freedom.

Kurdish and Christian Leaders Eager to Work with Trump

The Trump Safe Zone Plan cuts through such magical thinking, which has stifled the war against ISIS and prolonged the suffering of millions. And now this plan has gotten a real boost from important figures in the region: the leaders of the Federation of Northern Syria, the region where Kurds and Arabs, Christians and Muslims cooperate in fighting ISIS and protecting a diverse population in religious and political freedom, even sheltering many refugees from Iraq. The Federation controls a full fourth of Syria’s territory, which it has clawed back from ISIS and kept independent of Assad’s Syrian government.

In its letter, the Federation offers its own territory as Syria’s first Safe Zone. As the co-presidents tell Congress:

With increased cooperation with the U.S., it is not only possible to defeat ISIS but also to create the security that will lead to a serious decrease of the refugee stream. In several ways the Federation and the US can work together to make this new policy a success. If aid and rebuilding materials will be allowed in, it will be possible to provide support to many people who fled for ISIS and to rebuild what ISIS destroyed.

Turkey Wants to Put Jihadists in Control of Christian Towns

There is a real threat to the President’s sensible plan, however. It’s the scheme that Turkey proposed to the Pentagon that would allow Turkish proxies to enter the Federation and move to Raqqa and push aside the SDF. The overwhelming majority of these Turkish ‘Free Syrian Army’ forces are in fact jihadists. If they were to gain control over parts of Federation territory then women, Christians and Kurds would be oppressed and threatened again.

The Federation gave them liberty, equality and freedom. These jihadists would take it all away. Furthermore many Arabs in the SDF would certainly not welcome these forces from elsewhere, so the risk is real that they would clash with these Turkish-backed jihadists. The Turkish plan would therefore destroy the one free and peaceful region in Syria, wrecking the Safe Zone that already virtually exists. The impending Turkish attack would accomplish the same thing.

The Trump Administration should recognize that the Federation of Northern Syria is his natural ally in the region, and improve on Obama’s record of mixed signals and half-hearted alliances. Increased support for the one region where Christians live in peace and freedom alongside Muslims ought to appeal to Trump’s political base, and indeed to anyone of good will. Turkey’s aggression against the Federation must be stopped.

Unsurprisingly, the U.N. quickly denounced the Trump plan, clinging to its utopian, all-or-nothing peace talks. The Trump Administration now has the opportunity to prove that its plan is more realistic, more humane, and more in line with American values.