Hollywood producers were blown away by the song Switchfoot wrote for 'Unbroken: Path to Redemption.' In addition to WWII hero Louis Zamperini, the band honors their veteran grandfather. 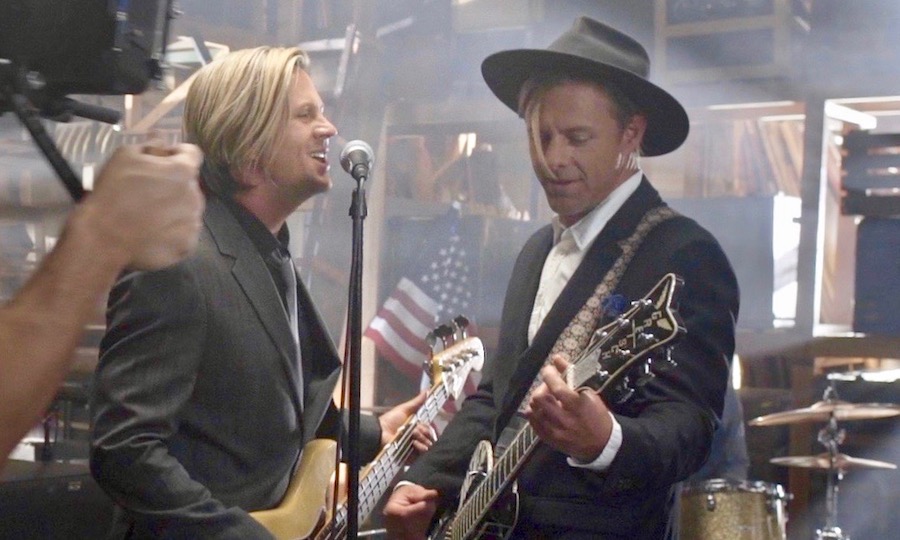 Switchfoot's Tim Foreman (L) and his brother Jon perform on-set of their new music video, “You Found Me.” The lead single on the soundtrack album for 'Unbroken: Path to Redemption,' it plays in the new film opening nationwide on September 14.

The story of one World War II veteran’s hard road to overcoming PTSD and addiction, Unbroken: Path to Redemption opens in theaters nationwide this Friday. A new single entitled “You Found Me” by San Diego-based rock band Switchfoot plays over the end credits — with more meaning behind it than meets the eye.

Producer Matt Baer praises how it reflects the journey of former Olympic athlete and airman Louis (pronounced “Louie”) Zamperini. Following his heroism in the Pacific Theater, the veteran succumbed to alcoholism after coming home. “This song ’You Found Me’ has two meanings,” Baer says in an interview. “Louis found love, and he also found his faith.”

The new Universal Pictures biopic is a sequel to 2014’s Unbroken, which dramatized Zamperini’s years as an Olympic athlete, airman and prisoner of war. Unbroken: Path to Redemption centers on his love story and marriage to Cynthia, their personal struggles and later his Christian conversion at a Billy Graham revival meeting.

“All we did was send the band a trailer for the film,” says Baer. “Only seeing the trailer, they wrote this song. It blew us away!” The music video features frontman Jon Foreman and other band members in 1940’s period clothes, interspersed with clips from the new film.

Yet their passion for the story and its themes goes deeper than paying tribute to one hero.

‘Our Grandfather Was A POW As Well’

Brothers Jon and Tim Foreman, who started Switchfoot in 1996, grew up on the California coast. Their hometown of San Diego is just two hours from Los Angeles where Zamperini often hit the surf. Like him they are also avid surfers. In fact, Switchfoot gets its name from a surfing term.

“What’s remarkable is that Jon and Tim’s grandfather was a pilot in World War II who crashed in a B-24 and survived,” says producer Baer. “The brothers knew about Lou’s story because their father had often recounted it. It’s a fantastic full circle.” They revealed more in a recent interview with a Hollywood media outlet. “He was a POW for several years,” says Tim Foreman of his grandfather. “So Louis’ story circulated through our family. It’s kind of a window into our grandfather’s story. We can see a different side to his story, some of the stories he didn’t tell us.”

In Unbroken: Path to Redemption, Zamperini turns to alcohol in attempts to forget his traumatic B-24 plane crash and what he faced as a prisoner of war.

He is only able to forgive his captors after evangelist Billy Graham (portrayed by his grandson Will Graham) preaches the gospel with him at a tent revival meeting. This change of heart is reflected in Switchfoot’s song. “Farewell to all of my resentment,” declares the end refrain. “All my discontentment is forgiven and I let it go.”

“This film has a lot of personal meaning for us,” continues Foreman. “To be asked to be a part of that, to story-tell from how we do things — through our music — is a real honor.”

Last December, Switchfoot decided to go on hiatus after two decades and ten albums as a band. However, they have been active despite their break.

They wrapped up the 14th Annual Bro-Am Beach Festival on June 30. Nearly 16,000 fans packed out Moonlight Beach in San Diego for music and competitions that celebrate surfing and community. The event led and hosted by Switchfoot raised over $250,000 for at-risk and underprivileged children across the region. Earlier in the summer, the band also led worship and played rock songs during Pastor Greg Laurie’s evangelistic rally at AT&T Stadium — home of the NFL’s Dallas Cowboys. Switchfoot has a few upcoming shows on the calendar, though they have not yet revealed plans for a new album or tour.

As to the major film this weekend, producer Matt Baer can hardly contain his enthusiasm for their new song. “If you listen to it carefully, the song builds musically exactly the way the film does,” says Baer. “By the end, it becomes a tremendous anthem in the same way the anthem of Lou’s life occurs with Billy Graham.”

“The song works in perfect harmony with the emotion of what Lou’s journey is.”

Rated PG-13 for thematic elements and disturbing images, Unbroken: Path to Redemption opens in theaters nationwide on September 14. Watch the film trailer below.

Unbroken: Path to Redemption Interview With the Director and Producer

Faith and Forgiveness: An Interview With Will Graham and Luke Zamperini

Unbroken: Path to Redemption: The Louis Zamperini Story of Hope and Forgiveness