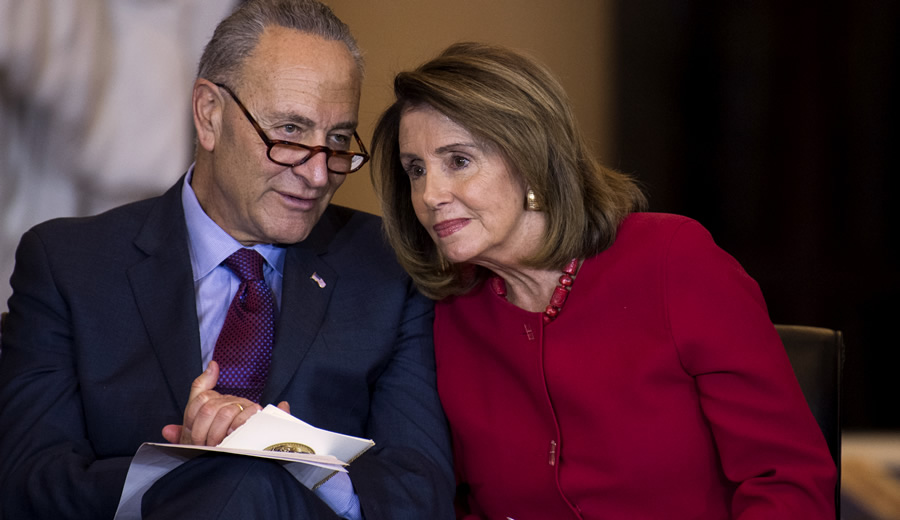 As surprising as a happy ending in a Hallmark movie, Nancy Pelosi has declared the House will open a formal impeachment inquiry against President Trump.

Why? You mean, aside from Alexandria Ocasio-Cortez demanding it? And she gets what she wants? Because, as Rep. Al Green said “the public is going to turn on us” if House doesn’t impeach? (And by “public” he doesn’t mean the hard-working Americans greatly benefiting from Trump presidency, but the vapid, screeching “resistance.” And the bookers at MSNBC.) Because two-thirds of House Democrats are itching to ignore the needs of the country in order to feed their bloodlust for Donald Trump?

Why? It certainly isn’t because it’s the right thing to do.

Where to find the high crime or misdemeanors? This cannot be about one phone call to Ukraine’s president. Ukraine itself says it didn’t feel pressured by Trump to look into Joe Biden’s funny family business. See our report from yesterday. Ukraine’s new president has been bending over backwards to make amends to the U.S. for his country’s role in interfering in the 2016 elections on behalf of Hillary and at the behest of the Obama Administration.

It can’t be about not turning over a whistleblower complaint (an item cited by Pelosi). DOJ and DNI think it’s dubious that the law applies here. You’re going to impeach Trump over a disagreement between lawyers? During a booming economy?

But, Al. Trump held up $400 million in military aid to Ukraine two days before making the call. So? For one thing, the money was released. And another, when hasn’t Trump griped about us footing the bill for other country’s defenses? For another, Ukraine denies any quid quo pro.

For another, Biden is on tape boasting about holding up a billion dollars in loan guarantees to Ukraine unless they fired the prosecutor investigating his son. How on earth isn’t that crucial? How can that possibly be defended without given Trump an even stronger defense against impeachment? If you can’t defend it, then what’s the problem with Trump asking about it?

Hunter Biden is on record as pocketing at least $50,000 a month from a Ukrainian natural gas company despite knowing nothing about the Ukraine or natural gas. Even CNN foreign policy analyst Ian Bremmer knows this was all about influence peddling.

The sure tell we’re dealing with a Clinton-esque pay-to-play? Biden’s people say the allegations were “debunked.” If Hillary had a dollar for each time she used that one, she’d have almost as much money as she got from the Russians in the Uranium One squeeze.

However, tell you what. If Biden’s actions were legit, Lord, let me be adopted by ol’ Uncle Joe. I’d love a $50,000 a month gig sitting on a board for a company in a country where my new pappy is America’s point man. Heck, I’ll even go to Joe’s rallies, help him remember where he is, when he is, and run interference when he creates out of whole cloth some cherished memory.

And I’ll weep during his inevitable crash and burn in the primary.

Good work if you can get it. It’ll buy me a boat big enough to sail far away from the disaster of a Trump impeachment inquiry.

So Why the Sudden Impeachment Push?

So why this sudden impeachment frenzy? I mean, beyond the blowhards who’ve been calling for his impeachment since before his inauguration.

Get used to this phrase because you are going to be hearing it constantly from Democrats. “Trump is going after/prosecuting ____ to distract attention from the impeachment inquiry.”

DOJ Inspector General Michael Horowitz’s report on the systematic FISA court abuse by the FBI/DOJ/Obama cabal is finished, and will be released any day. District Attorney John Huber is digging out the details of that seditious “Russia Collusion” black op against Trump. A black op that involved Obama’s people drawing in intelligence resources from at the very least England, Italy, Russia and Australia. And Ukraine, by it’s own admission. (Yes, using foreign governments to interfere in the U.S. election.)

Pay No Attention to the G-Men Behind the Curtain

Oh, how desperate Democrats are to deflect. It’s no coincidence Rep. Adam Schiff, who spent three years lying his Ed-Buck-Loving-Face off about Russia Collusion is at the center of this sudden scandal.

It’s no coincidence this drops right as former FBI Deputy Director Andrew McCabe is referred for criminal prosecution. In fact, just yesterday Judicial Watch got hold of a McCabe memo indicating how serious DOJ Deputy Director Rob Rosenstein was about wearing a wire into the White House to bug President Trump. (After no evidence had been uncovered of Russia collusion. And after Rosenstein himself had made the case for Comey’s firing. After Comey had twice gone to Trump with the expressed purpose of entrapping him. After Comey had placed spies inside the White House.)

Knowing what’s coming, you’ve got to muddy the waters. Your only hope for diminishing the impact of just how ruthlessly corrupt, how dismissive of even the most basic of civil liberties, how desperate to destroy Trump these people were? The chaos of impeachment. Pushing the public to say “Everyone’s corrupt. It’s just the way Washington works” is your only play.

I’m old enough to remember the demoralizing days of Watergate. I remember the paralyzing impact of Iran-Contra. I made a living mocking the circus of the Clinton Impeachment. Those who don’t remember those times have no idea what a mess impeachment dramas cause. The bitter division. The stagnation. The oxygen-sucking obsession. With those dark episodes in mind my traditional reaction has been “America, please, don’t go down this road!”

However, I have to face facts. We are already bitterly divided. House Democrats have no interest in the people’s business. Massive progress that is easily within reach is left to whither and die. And obsession? If a tree falling in the woods is not blamed on Trump does it make a sound?  If Redskin’s quarterback Casey Keenum came out this morning and blamed his team’s five turnovers on Trump, all of DC would forgive him. “Happy birthday, Cheryl!” “How can I be happy as long as Trump is in the White House?” Yeah, we’re long past obsession.

But Bring It On

So Bring It. Bring on your formal impeachment inquiry, Nancy Pelosi. Forget whatever you said in your statement. You’ve already confessed the real reason you’re doing it. “He can’t win; that is very serious.” In other words, “We can’t beat Trump fair and square in 406 days.”

.@SpeakerPelosi accidentally tells the truth here, which is that everything they’re doing is an attempt to stop @realDonaldTrump from getting democratically re-elected: “He can’t win; that is very serious.” pic.twitter.com/uP9zmJY07P

Bring It. Prove to the nation the Democratic Party is now run by Alexandria Ocasio-Cortez. That speaker’s gavel looks pretty shaky in your hand already.

Bring It. Throw down your anemic Mueller Report-based “obstruction” charge. Did you know the conviction of Gen. Michael Flynn’s partner got thrown out today? Think there’s not more to come? Did you actually read the IG report on James Comey? Read the earlier one on McCabe?

Bring It. Claim it was a high crime and misdemeanor for Trump to talk to Ukraine’s president about former VP Biden’s alleged corruption … in the wake of Biden’s own boast. And two days after the Washington Post connected Biden’s words to Ukraine to his son’s cushy natural gas gig. Tomorrow, we supposedly will get to read the transcript ourselves.

Bring It. Because if utilizing a foreign government to sabotage a political opponent amounts to treason, Trump won’t be the one needing to worry about the gallows.

Don’t Want the Fight, But …

Perhaps tomorrow will see the attack called off. In that case, we’ll be grateful … but still vigilant. Yet this is an hour to be praying fervently for the nation.

In its religious-like zeal to destroy this president and American institutions, Democrats are hijacking our political process and are set to crash the country. No one’s in a position to sit this out. We didn’t ask for it. We don’t want it. But sometimes you have to stand up. Sometimes you’ve got say, “Let’s roll.”