The Story of Reality by Gregory Koukl: Everything That’s Important 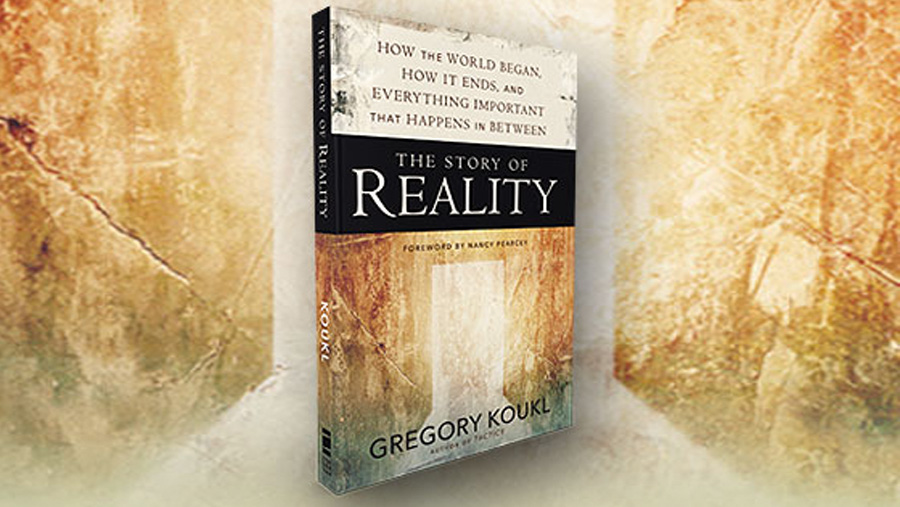 Gregory Koukl, president of the ministry Stand to Reason and an accomplished Christian apologist, should win a Lifetime Achievement Award in the category Most Ambitious Book Subtitle, for his new book The Story of Reality: How the World Began, How It Ends, and Everything Important that Happens in Between. If you understand what Koukl means by “important,” however, you’ll find that the book does just that.

What’s “important,” you ask? Obviously your answer will depend on where you’re standing when you raise the question. When I’m hungry, what we’re having for dinner is important to me, though my loved ones’ health is far more important. Elections and economies and social movements are important to more people in more ways. War and peace, feeding the world’s hungry, and other global issues of that sort rise to a much higher level of importance.

But if there was a way to frame all that in a larger context that would explain for everyone why we’re here, where we’re all ultimately headed, and how to make the most of eternity, that sort of thing would be really important. That’s what Greg Koukl offers us in The Story of Reality.

Christians really should know the story that explains those answers, but tragically many do not. Many others, meanwhile, think they’re rejecting the Christian story of reality, but they’re doing so without knowing what it really is.

For many years I worked with a Christian ministry whose primary explanation of the gospel began, “God loves you and offers a wonderful plan for your life.” It’s a true statement, and a very good one for those who understand what it’s saying. The difficulty is how few people know the meaning of even the very first and most important term: God. What do Christians mean when we say “God”? And what do we mean when we talk about Jesus Christ? Why do we bother talking about Him? What difference does He make?

You can’t answer those questions without putting them in the context of a story, one that most people in the Western world used to know, but not so much these days — not even Christians. Koukl puts it this way:

Dump a puzzle box at your feet and you’ll see what the Christian puzzle looks like for most believers. It’s a pile of pieces. They’ve never put the pieces of their puzzle together in an orderly way allowing them to see the big picture. As a result, they do not know if they are missing important pieces. They also do not know if there are pieces of other puzzles – bits of other worldviews – mixed in by accident that don’t fit into their picture. Or they might get confused when other worldviews take some of the Christian pieces and try to fit them into their own worldview pictures.

Every worldview has four elements, says Koukl: ”Where did we come from? What is our problem? What is the solution? How will things end for us?” That’s what’s really important. Get that right, and the rest will follow. This is what worldview is about.

Christianity says that God created us; we rebelled in “the Fall;” God provided the solution through Jesus Christ; and in the end He will reign over a kingdom of eternal joy, love, and peace for those who accept His solution, while those who reject Him will suffer eternal consequences.

Obviously there are competing stories. There’s an atheistic version that says everything originated from an purposeless Big Bang; humans appeared on the scene through a blind process of evolution; our problem is that evolution doesn’t make peaceful creatures, much less people who can overcome the ultimate problem, death; our best solution is to understand things better, mostly through science, and try to treat each other better. The end will be nothingness, first for every individual, and ultimately for all the useful energy in the entire universe.

There are other stories, of course. The one we all want is the one that explains everything best overall. It’s not much good to know one’s own story, after all, without having some idea whether it’s a good one: one that does a great job — the best job, even — of explaining all of reality. Thus while part of Koukl’s purpose in this book is to tell the story as Christians understand it, he also takes considerable time to explain other worldviews’ stories, and compare their answers to the Christian worldview’s answer.

But he never loses track of the fact that he’s passing along a story; or rather “the Story,” as he calls it. He tells it well; he explains it clearly. Some thinkers are scientists, some philosophers, some theologians, some artists; Greg Koukl is a translator. He gets what they’re saying, and puts it in language that’s both understandable and enjoyable reading for the rest of us.

So this isn’t a book for specialists. I would call it essential reading for everyone; everyone, that is, who wonders whether there’s a solid answer to life’s most important questions, and whether they could ever get a grasp on it all. There are answers, and you can know them. You really can know where we came from in the beginning, where we’re all headed in the end, and yes, everything really important in between.

Before Your Kids Have Access to the Internet, Read This

When a Professor Challenges Your Christianity