Steny Hoyer Breaks With Nancy Pelosi: No, A Wall Is Not ‘Immoral’ 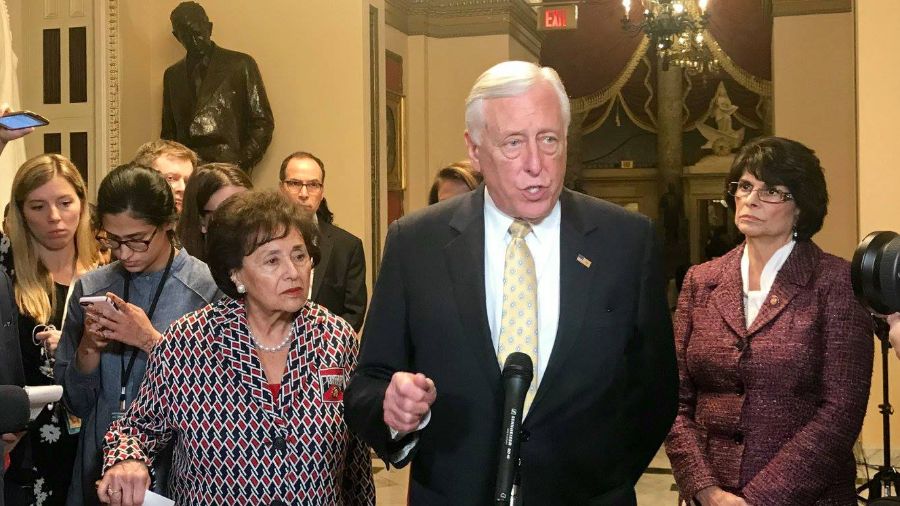 FILE - House Majority Leader Steny Hoyer speaks to journalist about the partial government shutdown in an image posted to his Facebook page on January 3. Hoyer contradicted Speaker of the House Nancy Pelosi on Wednesday by saying that building a wall "is not an issue of morality."

House Majority Leader Steny Hoyer contradicted Democratic leadership on Wednesday after he contended that constructing a wall on the U.S.-Mexico border is not inherently immoral.

“I don’t think [building a border wall] is an issue of morality,” Hoyer said responding to Speaker of the House Nancy Pelosi, who has referred to a border wall as “an immorality” on multiple occasions.

“My own view is, this is not an issue of morality. A wall is immoral if it tries to imprison people who shouldn’t be imprisoned,” Hoyer told Fox News’ Bret Baier. “A wall that protects people is not immoral. I think the issue is whether it works.”

Despite Pelosi’s comments, Hoyer claimed that Democrats, and even some Republicans, question the usefulness of a wall, especially for the multi-billion dollar price tag.

“The reason that I mention Republican senators, and House members — and the fact that the House didn’t bring a bill [to fund construction of a border wall] until there were 10 days left in the year — is because there are an awful lot of people that just believe a wall, in and of itself, will not work, and a wall is not the best place to spend money,” the Maryland Democrat said. “That’s what I believe.”

Hoyer dismissed the idea that the wall is racist and further noted that Americans should not be framing the argument with racial motivations.

“The debate ought to be not on morality or racism,” Hoyer continued. “I will say that I’m not pleased with some of the rhetoric that has come about — dealing with those coming across the border. I would think some of that rhetoric was in fact racist. We think some of that rhetoric was to inflame and was not based upon facts, but having said that, we’re prepared to work with the president to make sure our borders are secure and that’s the important point.”