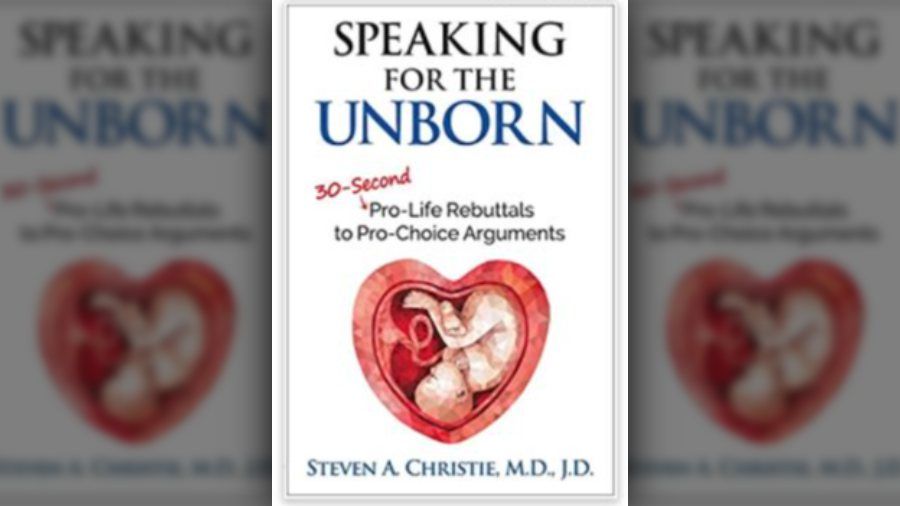 Doctor and lawyer Steven Christie’s moment of conversion from pro-choice to pro-life happened when he discovered discarded babies in formaldehyde in a dusty room at his medical school. “I became horrified at how irreverently these babies were being displayed, clearly forgotten over the years in this old room.” His embryology professor became angry when he told her what he’d found. “She immediately grew angry. She became agitated and began yelling at me. ‘They’re not babies! They were never babies! They were never alive! They’re nothing more than fetuses!'” He stared at her in silence. “And I knew at that moment, those babies were alive and they were babies. And interestingly, I knew she knew it too.”

Speaking for the Unborn

“I write from a fairly unusual perspective,” Christie told The Stream about his new book Speaking for the Unborn: 30-Second Pro-Life Rebuttals to Pro-Choice Arguments. He also has a four-part video as a primer before people read the book.

“As a physician, I know a fair amount about science and embryology. As a lawyer, I’ve studied the law and the Constitution. As a father of five, I know a bit about pregnancy and babies. As a husband of 25 years, I know the challenges women face in the struggle to balance the demands of career and family life. But what might make me most qualified to speak about abortion is the fact that I spent the first 30-plus years of my life as a secular pro-choice liberal.” Christie continued:

So I know exactly what, why and how the other side thinks about abortion. And having lived in both the pro-choice and pro-life worlds, I have a fairly unique vantage point from which to analyze the abortion debate. When I was pro-choice, I learned the arguments. But when I became pro-life, I learned the truth. And this book is that truth.

That’s how Christie describes his new book. But he’s clear that he didn’t come up with all of the arguments by himself. “Like a lot of us, I’d stumbled across so many great, wonderful pro-life arguments over the years. And I thought it was time to organize them, compile them, edit them into one source and then present them in a user-friendly format that you could take with you into discussions or debates and to real life circumstances.” He also provides the sources for all of the quotes and rebuttals.

His book is organized in sections based on pro-choice arguments. For example, Christie outlines the pro-choice arguments stating that an unborn baby is just a clump of cells or that it isn’t alive. He then provides seven pro-life rebuttals on that topic.

None of the rebuttals are faith-based, and for a good reason, said Christie. Most of the pro-choice crowd is secular. “So if you’re debating one of these non-religious people and you’ve made 10 fantastic, compelling arguments based on science and the law and reasons and social justice issues, but then you happen to throw in the word God or sin, you know, you see the face of that person change immediately, and I’ve seen it a bunch of times. I’ve learned this the hard way, and you can read their mind. “They’re like … ‘Hey, Steve, wow, wow. … I didn’t realize you’re a freak. You know, have a nice day.’ And that’s the end of the argument. So then at that point, all the non-religious arguments you made have gotten thrown out the window.”

Christie said he may be a little naïve, but he believes that if the facts about abortion are presented clearly, there will be a “huge percentage” of people who will understand it. He doesn’t expect people to praise his good argument, but if someone says, “Hey, Steve … I never thought about it that way before,” it’s the sound of a heart opening to truth. “We try to open hearts one at a time. So, that’s my goal.” He wants this book to “arm people.” “I don’t like the military analogy, but to arm people with the truth, so they can go out there and make practical arguments in a polite, compassionate way to people and change hearts.”

People don’t have to be a doctor or a lawyer to make a difference. “We’re not all going to be Ben Shapiros, you know, out there in the college arenas fighting it out in these harsh debates. … Most of us aren’t going to be legislators or appellate court lawyers fighting in the Supreme Court. But all of us have a critical role to play. … I always remind people, our role is in the ordinary course of our everyday lives with our families and our friends and our coworkers. It’s that one heart at a time.”

Get Out of the Comfort Zone

The book and the video may be found at Amazon and Christie’s website Speakingfortheunborn.com.