South Africa Descends Into Looting and Violence Amid Economic Turmoil

A collapse of economic freedom has driven South Africa's unemployment rate to 42 percent. 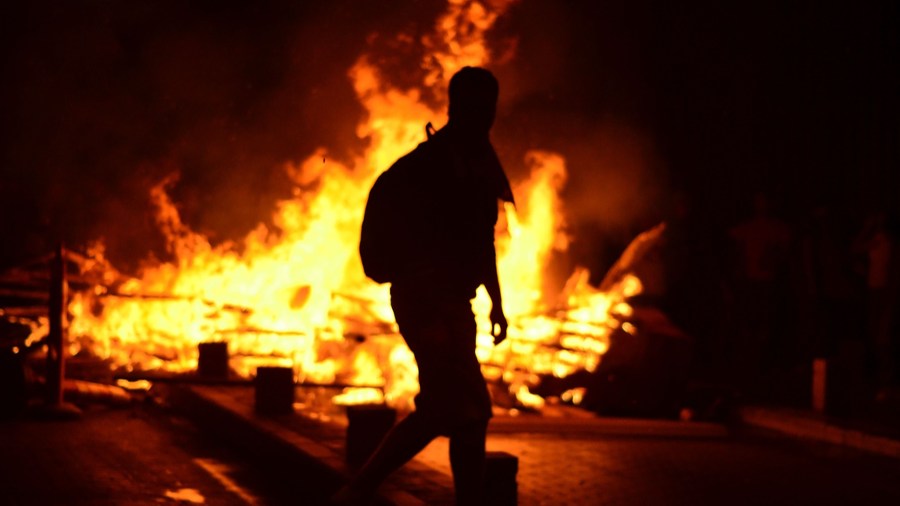 After more than a year of enterprise-killing lockdowns, and a decade of declining economic growth, South Africa was gripped by violence and looting in July.

Words Only Go So Far

Attempting to give a glimmer of hope, during two public addresses, and in his July 12 letter, President Ramaphosa said, “We are building up, not shutting down. We will rebuild our economy and create jobs.”

But as South Africans have learned, mere words from the government can only take one so far. Years of policies that discourage economic activity, business- and capital-formation, and job creation have led the country into this present crisis.

Ramaphosa also highlighted phenomena such as hunger, poverty, and inequality as factors contributing to the current spate of looting.

Yet he did not address any of the government policies that exacerbate, if not cause, these burning issues. Because of an anti-entrepreneurial and anti-wealth creation environment, many South Africans will feel that inequality is a static phenomenon, and that the only way to take care of themselves is to take what they can get from others, while they can.

Citizens are told to vote, to give the state more power, and then their problems will be solved. When nothing happens, hopelessness often manifests as violence.

A Recipe for Violence

Citizens are told that, if they do not have as much as someone else, it is always because that other person (or group) has illegitimately acquired what they have. Many in government, and in the commentariat generally, assume that wealth is fixed, and that it can only ever change hands through force. There is little to no acknowledgement of the fact that the government controls every facet of the economy (in some instances blatantly, in others subtly). This state of affairs has steadily manifested to where we are now, a climate in which prosperity matters primarily on who you know politically, which leaves groups competing over government spoils. As we’ve seen, it’s a recipe for violence.

JUST IN – Every single store in the Jabulani Mall near Johannesburg has been looted. Reports and videos of riots at more malls in parts of South Africa.pic.twitter.com/t5DL96EVIM

Yesterday South Africa's anti-white former president turned himself in to the government. He was found in contempt of court for failing to appear on corruption charges. riots and looting from his supporters broke out. This is citizens opening fire on South African looters. pic.twitter.com/mZ08wQFhFc

‘The very same looting will cost us our jobs, food, and everything essential to us’: Days of arson and rioting that killed scores in South Africa is lessening in some areas, but many people in the country aren’t sure if they could recover from the riots pic.twitter.com/fygRIurHYM

Hopelessness and Frustration Permeate the Country

According to Neil Gopal, chief executive of SAPOA (SA Property Owners Association), shopping malls and retail outlets in KwaZulu-Natal and Gauteng suffered more than R20 billion ($1.4 billion) worth of damage. About 800 stores were looted and 100 malls were either burned down or suffered significant fire damage. Further, the eThekwini Economic Development and Planning Committee indicated that about R1.5 billion in stock ($102 million) had been lost, over 50,000 informal traders lost their livelihoods, and approximately 1.5 million people lost their potential to earn an income. Some 150,000 jobs are at risk.

Rebuilding businesses and reinforcing and expanding supply chains will take a long time. As of July 14, 70 people had been killed. At this point, it is not a case of ‘lives vs. livelihoods’ anymore; after a year of destructive lockdowns, the economy — and everyone’s economic wellbeing — is experiencing yet another battering.

In the latest budget delivered by finance minister Tito Mboweni, cuts to areas from healthcare to education were announced. This was the inevitable, harsh outcome resulting from years of government pouring billions into state-owned companies (read: black-holes). Indigent citizens will feel these cuts the worst.

Citizens are told to vote, to give the state more power, and then their problems will be solved. When nothing happens, hopelessness often manifests as violence.

In the decade up to 2019, South Africa’s GDP growth averaged 1.4 percent. The credit rating is currently at junk level, and the government’s debt-to-GDP ratio is projected to breach 100% in the next few years. This would add further pressure on the private sector, and the government will become ever more desperate to control any and all possible sources of revenue.

To ever effectively arrest and reverse the ongoing decline, the country needs real, transformative economic growth. Focusing on “the rich” can only get you so far; at some point there will be nothing left to redistribute. Transformative growth does not mean more government control and regulation. Rather, it entails:

Some will blame the current devastation on one prominent individual only — former president Jacob Zuma.

However, for as long as real economic growth and progress are prevented by government ideology and policies grounded in statism, the fertile ground for grievance politics (and the exploitation thereof by opportunistic forces) will continue to exist in South Africa.

President Ramaphosa’s ideals of building up, of real job creation, will come to naught unless South Africa becomes investment-friendly.

Chris Hattingh is Project Manager at the Free Market Foundation. He has an MPhil in Business Ethics from Stellenbosch University. He is the author of published articles on consumer rights, economic freedom, inequality and individual freedom.