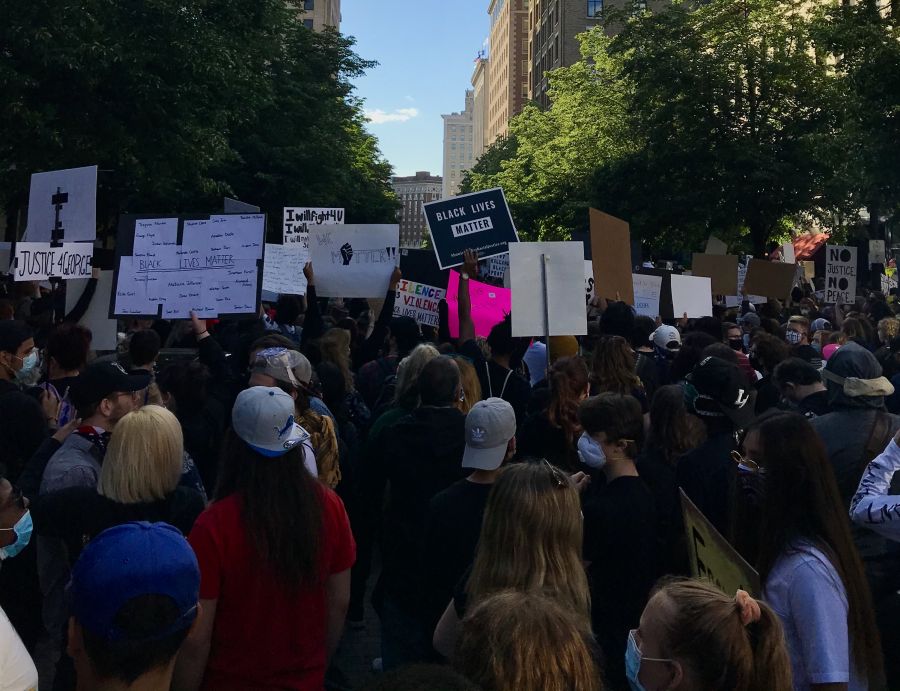 A protest in Grand Rapids, Michigan on May 30, 2020, following the death of George Floyd.

I am, by nature and faith, an optimist. I think life is good, that the created world is beautiful and my fellow human beings were all created good even though that goodness is marred by selfishness and weakness. I believe God is loving and has a wonderful plan for planet earth.

Therefore when I see thousands out in the streets protesting against systemic racism and police brutality my heart lifts. This is an amazingly positive aspect of our human society — that so many people see evil in the world and want to stand up against it. It’s encouraging that so many of the protesters are young people. It’s a good thing that their consciences are sensitive to brutality, violence, injustice and racial prejudice.

There’s something else to like about the protests: the symbolic act of kneeling is, at its foundation, an action of humility and respect. There may be mixed motives and the kneeling may be done out of peer pressure or fear, but the action in itself is something to like. There is something else to like about the protests: that people from around the world have this same desire for goodness, peace, equality and justice.

However, while there is something to like about the protests, there is also something to loathe. If thousands of people are truly protesting against police brutality, racism and injustice, that is a good thing, but too often rage is at the root of protests, and that rage has its roots in resentment.

Resentment is a poison in the soul which leads to the blame game. A resentful person instinctively and automatically looks to blame someone else for the problem. If the thousands of protesters are saying, “I’m part of the problem and I want to be part of the solution”, then we’re moving in the right direction.

This is the history of revolution down through the ages: one group gets blamed and that group is eliminated. It is ironic that racism is, at its heart, blaming another racial group for what’s wrong with the world. But blaming others for being racist perpetuates the same mentality. Instead of gangs of thugs getting together to lynch the member of a minority group, the one accused of being racist becomes the new victim of the mob. Now that person will be vilified, excluded, persecuted and ultimately killed.

The difficulty is that very often the people being blamed really are part of the problem. It is very difficult not to blame them if they are actually guilty in some way. This is why justice must be objective and based on fact and evidence — not the howling of a raging, bloodthirsty mob.

The history of revolution in the world shows that judging and blaming others out of pure rage and resentment will always end in greater injustice. Anyone calling for revolution should know that, with very few exceptions, revolutions end in tyranny and terror. Revolutions rooted in resentment lead to genocide, the gulag and the guillotine.

What is the answer? The protests should hold up a mirror not only to our society, but to each one of us as individuals. In acknowledging police brutality, racism and injustice each one of us should raise our hands and admit, “Yes, at least part of me is racist. I am guilty of injustice in many small ways and I would probably revert to violence given enough pressure and stress.”

In other words, instead of playing the blame game, each one of us should accept responsibility to do what we can with what we have where we are. Joining a peaceful protest could be a positive action, but I want to ask, “After the protest is over what other positive action will you take to rid the world of all kinds of prejudice, violence and injustice?”

Think how the world could be changed if every person involved in the present protests went home and asked themselves the question “What can I do about the problem?” Think how the world would change if all the protesters decided to dedicate their lives to the cause in a positive way, and became teachers in inner city schools, social workers, psychologists, doctors, nurses and police officers working in disadvantaged communities.

Think. How the world would change if each person on the protest decided to help fund a struggling school in a down on its luck neighborhood, volunteered at the local homeless shelter, got involved in a prisoner rehab program, gave their time and money to help a church, school or community center in a racial minority community?

Now that is the kind of protest that would really change the world!

Dwight Longenecker is a Catholic priest working in Greenville, South Carolina. His latest book Immortal Combat looks at the problems of rage and resentment and what we can do about it. dwightlongenecker.com