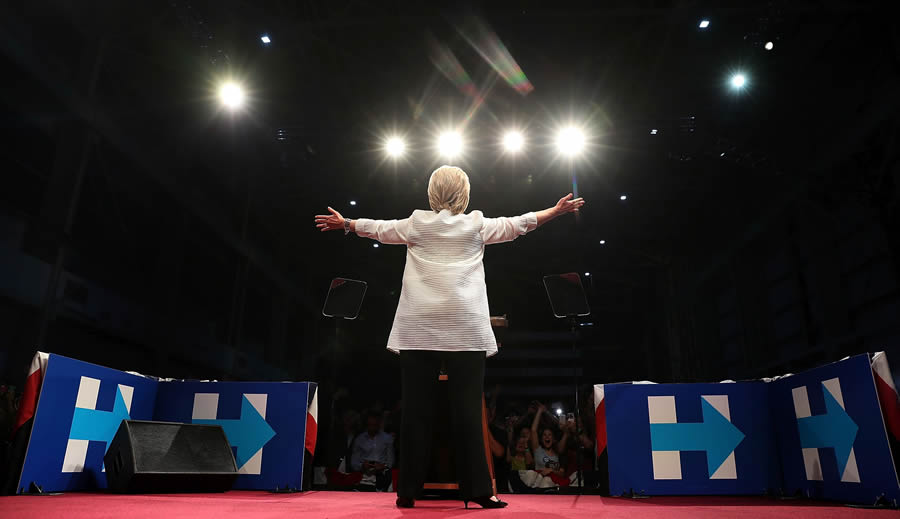 Saturday Night Live, in a spoof of It’s a Wonderful Life, speculated what would’ve happen had Donald Trump never been elected. Naturally — being SNL — the sketch pulled Trump (Alex Baldwin) through assorted vignettes of how wonderful life would have been for everybody had Hillary won.

If SNL had any interest in actually being funny, such a sketch could have been worth more than a cup of rancid month-old egg nog. But when their idea of “humor” is fantasizing about the president and first lady being divorced, and Hillary as a national savior, we know we’re getting nothing but further snide “Resistance”-flavored reindeer droppings.

But what are we to expect from the show that just weeks ago mocked a wounded vet because he was a Republican, and a network family that just days ago let Mika Brzezinski attack the Secretary of State’s patriotism in the most base, repugnant of terms? (Uh, shouldn’t it matter that her apology didn’t include apologizing to the person targeted by her slur?)

My Christmas wish is SNL would have the guts to admit just how wretched their existence would be in a Hillary Clinton presidency. The comedy landscape would be as cold, humorless and barren as Mr. Potter’s heart. What Hillary bit hadn’t been done to death by 2000? Redone in 2008? Overdone in 2016? How much new material would she have generated in office? She could barely campaign two straight days without being sick or staggering up steps. How much could she do under the burdens of the presidency? What was SNL going to do? Always depict her hooked up to an IV drip? Propped up by hot looking Secret Service agents? Making wilder and wilder excuses whenever something went wrong?

Look back over her quarter of a century in the public eye. When has Hillary Clinton said or tweeted anything memorable or colorful, except for assaults on the public (“basket of deplorables”), assaults on homemakers, “not going to stay home and bake cookies” or insults to four murdered Americans, “What difference, at this point, does it make?” And if you impersonate Hillary’s “I ain’t in no ways tired” you get labeled a racist.

The reason Hillary Clinton is not president is because the American people both in 2008 and 2016 made it clear they didn’t want to see her in the Oval Office. Why the heck would anyone want to watch a fake her in a fake Oval Office?

They’d never admit it publicly, but <i>SNL</i>’s writers are begging Santa for six more Trump years. He gives them more material by sunrise than most politicians offer in a career. He gives them so much material it’s a wonder the Writer’s Guild hasn’t forced him to join the union.

Plenty Would be Happy if Hillary Clinton Was President

However, since it’s the holidays, let’s gift SNL with their premise and admit plenty of people would be ecstatic had Hillary won.

Start with ISIS: Instead of getting erased off the face of the earth by the hour, they’d be spending this Christmas burning down churches, singing “O Holy Jihad.”

North Korea: No meaningful sanctions, plenty of nuclear toys under their tree … and no summit. Just the continued specter of nuclear war.

Iran: In 2016, Iran’s influence was expanding, Obama’s clandestine cash was reviving their dying economy. Their terror networks — aided and abetted by Obama’s decision to lay off prosecuting Hezbollah to help secure the nuke deal — were causing havoc. A Hillary presidency would have been the gift that kept on giving.

Vladimir Putin: With a Hillary presidency, Putin’s use of natural gas as a weapon and cash cow would be continuing unabated.

Mexico, Canada, South Korea, Japan: No revamping of gift trade deals that cut the legs out from Uncle Sam.

The seditious cabal at Justice/FBI: We would have no idea of the criminal machinations of the likes of Andrew McCabe, James Comey, Sally Yates, Peter Strzok, Lisa Page, Loretta Lynch, Bruce Ohr, John Brennan and James Clapper. No hint of the “insurance policy” to sabotage Trump, the FISA warrant abuses, the blatant disregard for civil liberties. As the saying goes, “They all expected her to win.”

That’s just for starters. We haven’t even gotten to MS-13, the sex and child traffickers busted by the Trump administration, lovers of open borders, George Soros … and, of course, the poor souls who actually read Hillary’s book or paid full price for her speaking tour with Bill.

But, alas, Trump won. It’s a Wonderful Life itself reveals a key reason the public should especially grateful that happened. In the closing act of the movie, George Bailey sees what the world would have been like had he not been born. It was a much darker, sadder place. With Hillary Clinton in office, with her embrace of the culture of death, how many more babies would never be born? What lights and blessings, what George and Georgina Baileys snuffed out as “Celebrate Your Abortion” replaced “In God We Trust” as our national motto?

Which gets to our final point. When we think of It’s a Wonderful Life, we tend to fixate on that final act, the angel trying to get his wings, the sad soul at the end of his rope wishing he had never been born. We forget the beginning. We forget the film begins with family, friends and the good townsfolk of Bedford Falls praying urgent prayers for George Bailey. And the recognition there is a God who answers prayers.

The 2016 election offered the public two flawed people. Famously flawed, one might say. One welcomed the faithful into his home and heart. Vowed to preserve our nation’s religious liberty. Who, despite his reputation for ego and arrogance, humbles himself, allows himself to be prayed over. Who speaks often of this nation’s belief and reliance on God.

The other promised an assault on religious liberty and religious practice itself. Where the Constitution promises a “freedom of religion,” Clinton changes that to “freedom of worship” — meaning locking religious expression inside the church and away from the public discourse. But even worship within the walls of a church would have been endangered under a President Hillary. That’s what she meant by saying “deep-seated cultural codes, religious beliefs and structural biases have to be changed.” That meant creating organizations to infiltrate and undermine churches with progressive ideology. That meant supporting laws and appointing judges who’d continue the trend of making traditional beliefs a criminal offense.

Had Hillary Clinton been elected, the faithful of Bedford Falls would barely have a prayer.