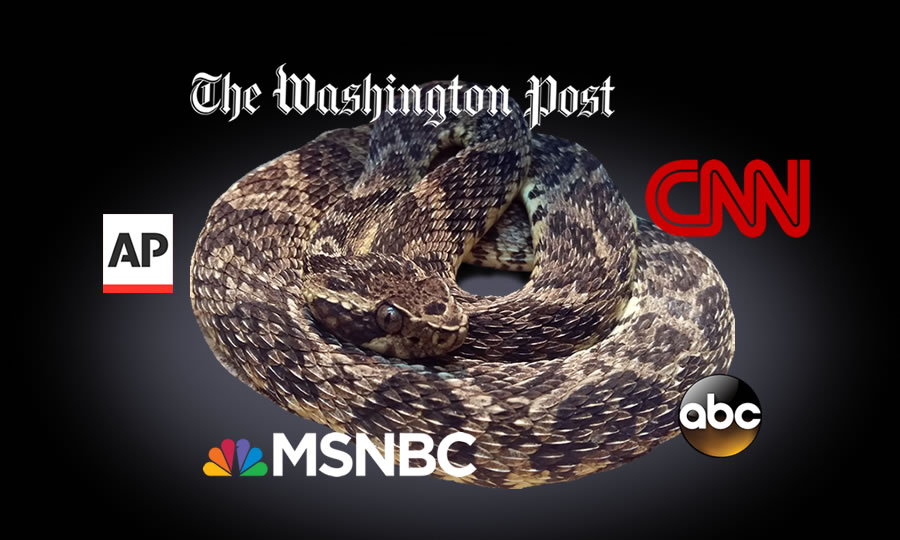 Yesterday’s article on the weekend’s mass shootings ended with a warning. I noted how Satan’s tactic of putting your needs and desires over the life and humanity of others has won the minds of many. But shall we give Satan the last word? No way in heaven.

Before we get there, though, we have to call out another of Satan’s tricks. We see it playing out (again) in this morning’s headlines. President Trump calls it “Fake News.” I call it “Snake News.” To me, fake news is “Elvis Spotted Singing Karaoke in Poughkeepsie,” SNL‘s “Weekend Update” or tabloid tales of a closeted gay celebrity “dating” a hot actress. Fake news is the work of hucksters and humorists.

Snake News is more sinister: the deliberate distortion or suppression of information with the intent to deceive, deflect and destroy. Snake News is nothing new. Its origins go back to the serpent in the Garden. Its modern form is found in newscasts and Twitter feeds. Paul called Satan “the ruler of the power of the air” for a reason. (Ephesians 2:2)

Snake News has been slithering across our screens the past 24 hours. Yesterday, President Trump delivered a speech denouncing white supremacy, calling for unity, declaring “hate has no place in America” and calling for a bi-partisan cooperation in finding solutions to mass violence. “President calls for unity.” That is the simple truth. That would the headline. That would be the tweet. Or at least, that would be the story, but for the ruler of the power of the air.

First, deflection became the order of the day. Rather than reporting the call for unity, mainstream media’s Twitter feeds focused more on Trump mistakenly referring to Toledo instead of Dayton. (This, while ignoring Joe Biden citing the tragedies in “Houston” and “Michigan.” Another example of the sin of suppression.)

Then The New York Times committed one of the most cowardly acts in the annals of American journalism. Their original banner headline on Trump’s speech was straight-forward, truthful: “Trump Urges Unity vs. Racism.”

The Indignant Brigade went absolutely bonkers. Trump Derangement Syndrome descended over the Times building like the spaceship in Independence Day. How dare the Times speak the Truth?! Say something neutral and true about Trump? AOC called it “cowardice.” Democratic candidates Cory Booker, Kirsten Gillibrand and Beto O’Rourke condemned the Times. So did some of their own woke writers. #CancelNYT trended.

The Grey Lady proved a harlot. Selling her dignity to feed her clients’ lust.

The mob moved on to CNN. It had done what few in the mainstream media are willing to do. It told the truth about the Daytona shooter.

A Twitter account that appears to belong to the Dayton mass shooter retweeted extreme left-wing and anti-police posts, as well as tweets supporting Antifa protesters. https://t.co/axFXvK0svP

Again shock. Outrage. Grab the devil’s pitchfork. CNN hasn’t taken down the tweet. They simply pivoted back to their SOP of attempting to destroy the president.

Which brings us to host Chris Cuomo.

We call it Snake News, but sometimes the media are wolves hunting in packs. We see this when the same phrase or concept suddenly pops up out of nowhere on the lips of media and political figures far and wide. (See “manufactured crisis” or “hand-selected Attorney General,” to cite two recent examples). We saw it this morning with the phrase “teleprompter speech.” Check out these two tweets that came in one right after the other. Do CNN’s Cuomo and the Washington Post also go to the bathroom together? The coordination is clear. The message is even clearer. The Snake News manipulation self-evident. “Yes, Trump said the right thing,” the serpent whispers. “But don’t pay attention. His words are invalid. Just insincere words on a teleprompter.” The irony? We spent eight years with a president who couldn’t even take a shower without his teleprompter handy. Obama was so tied to his teleprompter the Secret Service had to give it its own code name.

Seriously, when what is normal (such as a president reading a speech from a teleprompter) is twisted to appear suspect, you are dealing with Snake News.

When news outlets mimic a destructive talking point handed out in the darkness, you are dealing with Snake News. Hey, Washington Post. It isn’t just democracy that dies in darkness. It’s your soul.

How Do You Beat a Snake?

So how do you beat a snake?

We must be cunning and crafty in spotting the schemes deployed against us. The Snake News can bite us. It can strangle us until we’re speechless. It can also trip us up, leaving us flat on our faces. The snake’s rattle can also distract us.

We need eyes that see and ears that hear.

Victory is ours when we grasp the crucial fact. This is a spiritual battle. We do not war against flesh-and-blood (or cable hosts), but against principalities and powers. A spirit. A savvy enemy that comes to kill, steal and destroy. Fortunately, we’ve been given the mighty armor of God. His weapons of warfare more than meet the challenge.

Jesus during his 40 days in the desert defeated the serpent, by meeting his challenges with the truth in God’s word. When the serpent manipulated God’s word in response, Jesus hit him with more truth. Truth won in the desert. It will eventually win on Twitter.

If silenced on Twitter and Facebook and YouTube, it will win in the streets, around the office water cooler. If silenced there as well, it will win in your circle of family and friends. Through the “word of your testimony.” The result is not in doubt.

Truth wins. The story stands already written. There’s no cliffhanger ending. The Father of Lies is already defeated. The snake is already crushed. Its minions simply have not yet gotten the message.