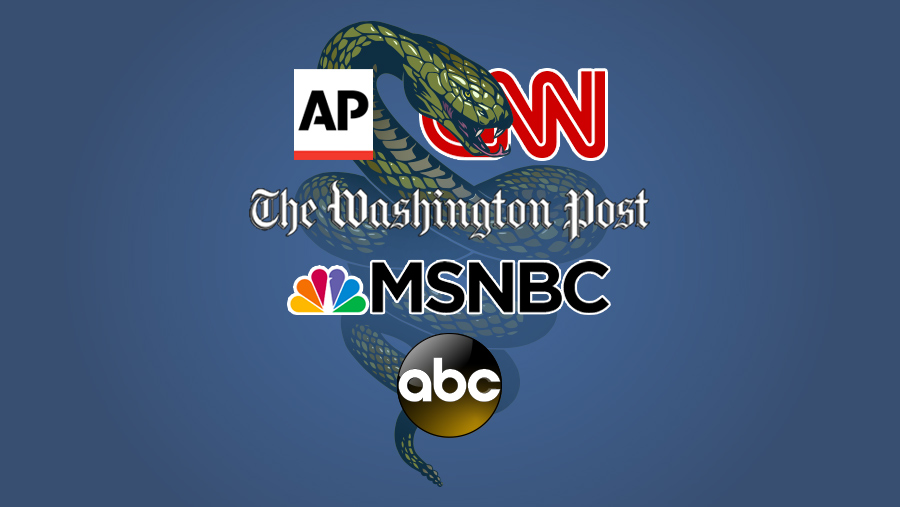 Three current stories on widely divergent areas all sharing one common denominator: the despising of Trump leading to death, deceit and destruction, pumped into the body politic by the venomous bite of Snake News.

As we’ve noted before, “Fake News” is stories like Elvis being spotted in Vegas, a closeted actor romancing his leading lady, Hillary Clinton being the smartest woman on the planet. However, Snake News is “The deliberate distortion, manipulation or creation of information in order to damage, demonize or destroy.” It goes back to the Serpent in the Garden and, thanks to the “ruler of the power of the air,” is now a regular feature of our mainstream news sources.

Recent Anti-Hydroxychloroquine Stories Are Based on Fraudulent Data

Remember the deadly pandemic? Looting apparently kills Covid-19. But before that happened, over 100,000 Americans died from the virus. As the coronavirus began ravaging our land, President Trump touted as a possible way of saving lives hydroxychloriquine, or HCQ. Suddenly — and directly because Trump championed the cheap, safe drug — the mainstream media treated it like it was arsenic. Even as doctors on the ground here and abroad were insisting HCQ was helping save lives, a massive effort was launched to destroy or discredit the drug and anyone who touted it. Just ask Rep. Karen Whitsett, the black Democratic lawmaker from Michigan who credited Trump and HCQ with saving her life, only to have the Democratic officials try to wreck her career.

But, Al, didn’t you see that the World Health Organization halted studies into hydroxychloroquine because it was proving deadly? That the esteemed medical journal Lancet said the data was showing HCQ to be dangerous? Yeah. The gleeful American mainstream media repeated that over and over and over and over again. Hitting Trump for touting the drug again and again.

Well, turns out an investigation by The Guardian newspaper shows the data used by the WHO and Lancet was false. The database came from a little known US company called Surgisphere that suddenly emerged as a data provider in the past two months. Its handful of employees seem to have very little if any science background. The Guardian discovered Surgisphere’s numbers in Australia flat out didn’t match what was actually happening in Australia.

Check out this key paragraph from The Guardian:

(Questions for another time: Who was behind the “scam”? Who put this little company into the game the past two months? Who got them WHO’s ear?)

The Guardian investigation is so troubling that Lancet is now acknowledging they have a mess on their hands.

Given the questions raised about the reliability of the data gathered by Surgisphere, we have today issued an Expression of Concern, pending further investigation.

An independent data audit is currently underway and we trust that this review, which should be completed within the next week, will tell us more about the status of the findings reported in the paper by Mandeep Mehra and colleagues.

(UPDATE: The study has now been retracted from Lancet.)

The New England Journal of Medicine also questioned the studies. Meanwhile, the World Health Organization has resumed its HCQ studies.

How much are you hearing about this? This, of course, is just one front on the war against HCQ … a war on Trump. How many of the 106,000 lives lost could we have saved, if there hadn’t been such a determined effort to deny Trump a “victory”? TDS kills.

The Lie About St. John’s

For four days now you have been told over and over again that officers used tear gas and rubber bullets to clear away “peaceful protesters” so President Trump could do a “photo op” at St. John’s Episcopal Church. It is a lie. It is Snake News. No tear gas. No rubber bullets. And protesters were far from peaceful.

The National Park Service — the famously non-political National Park Service — the cheerful folks who tutor you on the memorials, show off the Grand Canyon, guide you through Yellowstone — saw 50 of their people injured by rioters over the weekend. They issued a statement Tuesday spelling out why they cleared away the crowd Monday. And it had nothing to do with Trump. And everything to do with a very real threat to lives and property.

Read the whole statement here. But here’s the pertinent part:

On Monday, June 1, the USPP worked with the United States Secret Service to have temporary fencing installed inside Lafayette Park. At approximately 6:33 pm, violent protestors on H Street NW began throwing projectiles including bricks, frozen water bottles and caustic liquids. The protestors also climbed onto a historic building at the north end of Lafayette Park that was destroyed by arson days prior. Intelligence had revealed calls for violence against the police, and officers found caches of glass bottles, baseball bats and metal poles hidden along the street.

To curtail the violence that was underway, the USPP, following established policy, issued three warnings over a loudspeaker to alert demonstrators on H Street to evacuate the area. Horse mounted patrol, Civil Disturbance Units and additional personnel were used to clear the area. As many of the protestors became more combative, continued to throw projectiles, and attempted to grab officers’ weapons, officers then employed the use of smoke canisters and pepper balls. No tear gas was used by USPP officers or other assisting law enforcement partners to close the area at Lafayette Park. (Emphasis mine.)

Yet rather than be on the side of the innocent people destined to be hurt by those baseball bats, metal poles and caustic liquids, the media and democratic leaders continue pushing the lie. They keep protecting those who bring war on America. Why? Just because Trump walked over to a church that those militants had burned; the historic “Church of the Presidents.” TDS puts lives in danger.

The St. John’s story proves The First Law of Snake News. “Anything Involving Trump That the Media Is Hyperventilating Over Will Be Proven False.” (The corollary to the First Law: It’ll usually be proven false with 24 hours. As the St. John’s meme was.)

The First Law was proven true again Wednesday. Remember the frothing 24/7 coverage of “TRUMP-RUSSIA!”? Barely a peep yesterday as another nail was put in the coffin of the Trump-Russia Collusion black op. The three year, Snake News-driven lie that President Trump and his campaign had teamed with Russia to interfere in the 2016 election.

Former Deputy Attorney General Rod Rosenstein testified Wednesday before the Senate Intelligence Committee. Rosenstein played the befuddled bureaucrat kept in the dark by the FBI. He testified under oath he had no idea the FISA warrant he signed off on Carter Page had not been verified. That the FBI kept from him the exculpatory evidence proving Carter Page was no more a Russian spy than he was a Moroccan belly dancer. Rosenstein said if the FBI told him then what he knows now, he would not have approved the final Page FISA warrant. A warrant that allowed spying on President Trump and his people to continue.

Deputy Director Andrew McCabe had not been forthcoming, he said. (McCabe then turned around and accused Rosenstein of giving “false” testimony.)

Rosenstein acknowledged that when he appointed Robert Mueller Special Counsel in May 2017 he did not know that Peter Strzok’s 9-month investigation had shown there was “no there there” in terms of collusion. (In other words, there was no need for a Special Counsel.)

But the gullible puppy routine only went so far.

Rosenstein also admitted under oath that he did know by August of 2017 that there was absolutely, positively zero evidence Trump or any of his associates were connected with Russia. And yet, he allowed the Mueller Special Counsel investigation to continue. And yet, he did not clear Trump and his associates even though he knew they were innocent.

In fact, he signed a scope memo expanding the investigation … prepared by the same people conspiring in the Trump Russia lie in the first place.

Carter Page, George Papadapoulos, Michael Flynn. We know how their lives were ruined, their names smeared. How many others were dragged and kicked around by Mueller’s team? How many other people connected with Trump faced financial ruin?

Bigger picture. How paralyzed was our nation because of the “Trump Russia Collusion” drama? How much was national security damaged because Trump wasn’t free to deal straight up with Russia? For example, how many more lives were lost to Islamic extremism n the Middle East because the U.S. and Russia couldn’t fully cooperate?

And why? TDS. The Obama administration concocted a lie, the media peddled the lie, the public absorbed the lie. And Americans suffered.

The enemy comes to “steal, kill and destroy.” In the Garden he used an apple and smooth words. Today he uses his Snake News Networks and chyrons.