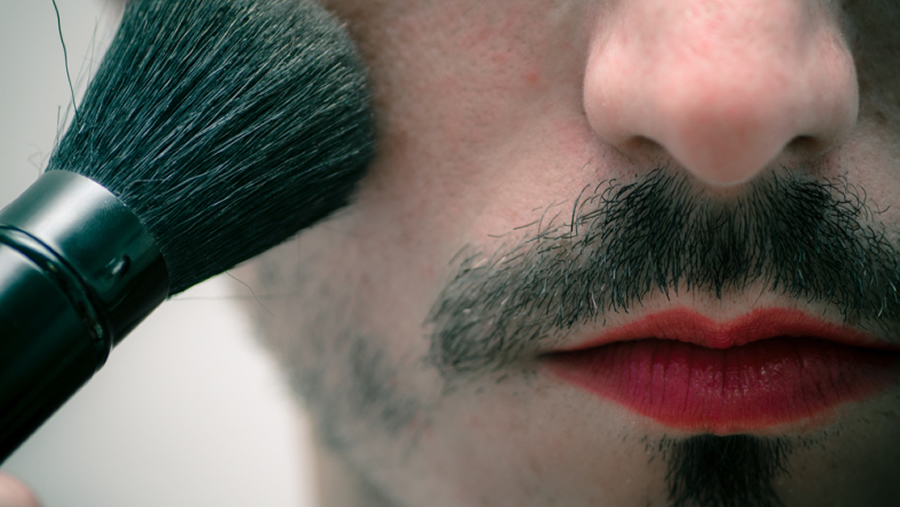 Is it okay to laugh as “Jessica” Yaniv gets raided by the police? That’s the assumed name of a creepy Canadian man who pretends that he’s a woman, marches into women’s salons, and demands that the female workers wax his fully male genitalia. Then he files criminal “human rights” complaints against the salons when they refuse him.

This man (yes, he’s a man, and it’s not yet illegal in America to say so) enjoys harassing small business owners. No doubt he was inspired by LGBT activists persecuting Christians in America for refusing to play along with the farce of same-sex “marriage.”

Why did the Mounties have to raid Yaniv’s lair? It seems he was threatening journalists with pepper spray and a taser. Both of those are illegal in post-op, gelded Canada. See this video report from the indispensable Canadian resistance site The Rebel Media. It shows Yaniv making a video threat against a (transgender!) journalist.

And there’s more to this story. It seems Yaniv is not content to harass female salon workers and store owners. He also seems to have a troubling history with … underage girls. See the Toronto Sun:

“From speaking to five victims, three of which I profiled for The Post Millennial, I learned Yaniv demonstrated patterns of clearly disturbing sexual and emotionally abusive behaviour, specifically towards young girls,” said journalist Anna Slatz.

“Of the three girls I profiled, two had been subjected to vastly inappropriate and unwanted attentions from Yaniv when they were just 14 years old. The attentions surrounded sex, menstruation, and access to various women’s washrooms where Yaniv seemed to believe nude young girls would be present.”

Not to fall into psychiatric jargon, but Yaniv is apparently a “creeper.” Are we really surprised that self-styled heterosexual men who adopt female personas, and then claim to be lesbians … display sexual perversions? That men who want access to women’s restrooms might be the very last people those women would want gaping at them in there?

The Healing Power of Scorn

To paraphrase Oscar Wilde, it would take a man with a heart of stone not to read of these things and … laugh. What else should we do when ordinary, even handsome men turn themselves into ghastly parodies of women? And all in service of a perversion?

Yes, sin is sad, and evil grieves the heart of God. But it’s also often ridiculous, and in The Screwtape Letters, C.S. Lewis cited St. Thomas More’s biting quote about Satan. “The devil … that proud spirit … cannot endure to be mocked.” And here what we’re mocking is clearly the devil’s work.

It would take a man with a heart of stone not to read of these things and … laugh. What else should we do when ordinary, even handsome men turn themselves into ghastly parodies of women?

We need the courage to say that. Maybe forty years ago, when “gender identity disorder” was still correctly classified as a mental illness, and its victims subject to scorn? The Christian thing to do would have been different. Maybe keep silent, or emphasize how all of us are broken by sin.

But now things are different. Now it takes nerves of steel bordering on recklessness to point out that maybe, just maybe, this whole transgender ideology is false. That it’s victimizing kids who might well be autistic. And permanently sterilizing girls having Lesbian “phases.” Grooming or traumatizing little kids by squeezing them between fake boobs at “drag queen story hours.” Destroying women’s sports. But worst of all, drumming into our heads a Gnostic lie from the pit of hell. (For more on the Gnostic heresy at the root of transgenderism, read my old essay here.)

It’s All About Male Power and Pleasure

As you can read in Jennifer Morse’s relentless study, The Sexual State, every last jot and tittle of the Sexual Revolution has been in the service of out-of-control, fallen, sinful male sexuality. This has been true from its beginning in the writing of the Marquis de Sade. (Did you know he was the first pro-choice thinker in the West since antiquity?) It took third-tier philosopher Jean-Paul Sartre to resurrect de Sade’s agenda. And the partner who served Sartre as pimp, Simone de Beauvoir, to sell it to women. That was: to celebrate and sanctify the adolescent male libido as the human norm. Then convince women that they could attain “equality” by shoehorning their own sexuality into the teenage male mold.

De Sade ended up in prison for his vicious torture of prostitutes. But his tedious, sociopathic books of pornographic blasphemy became for some twisted intellectuals a kind of taboo scripture. So they served Michel Foucault, whose corrosive theories now dominate the study of literature almost everywhere. Instead, de Sade deserved the one reaction that would have appalled him. He richly merited mockery, as a pathetic compulsive onanist and long-winded bore.

Sartre, the comfortable Communist who cozied up to the Nazis until Moscow ordered him otherwise (a little unpleasantness called “Operation Barbarossa” soured that alliance)? A moderately talented playwright, he plagiarized and dumbed down Heidegger for French middlebrow readers. And he postured as a brave revolutionary from the safety of a cafe. He didn’t merit refutation, but parody. And so, all too obviously, did his sad-sack mistress Simone de Beauvoir.

Likewise, the Americans who mainstreamed all this half-baked philosophy and seamy pseudo-science. Margaret Sanger, who embraced promiscuous male attitudes. She used eugenic panic to popularize contraception, and invented a pseudo-mystical mumbo-jumbo rationale for sleeping her way around the world. Unleashing sexuality would make us all … godlike supermen, she promised in the laughable manifesto The Pivot of Civilization. (Read Benjamin Wiker for a detailed dissection of Sanger.)

At all of these poseur prophets, and their followers now in power, we ought to laugh, long and hard. Then fight them with the grim glee and scorn of consequences the Rohirrim summoned as they charged the forces of evil in The Lord of the Rings.


John Zmirak is a senior editor at The Stream and author or co-author of ten books, including The Politically Incorrect Guide to Immigration.