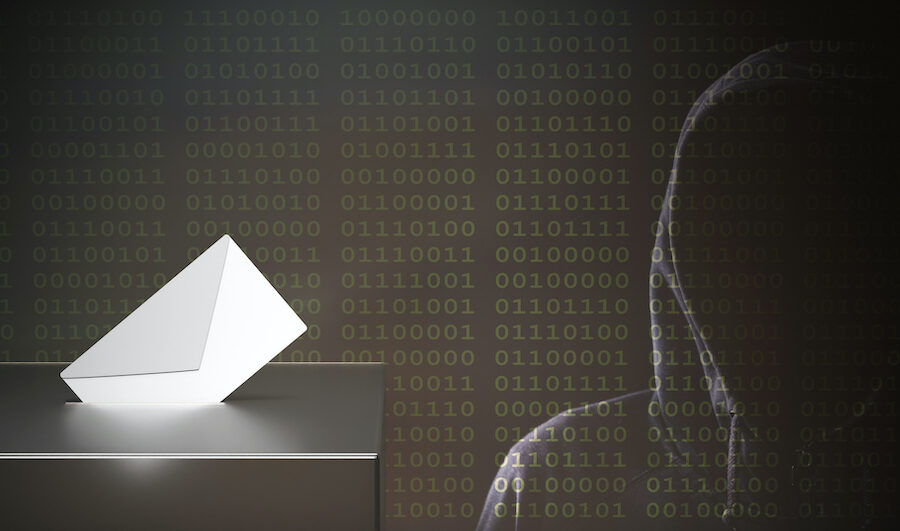 The mainstream media have summarily rejected President Donald Trump’s claims of election fraud as “unsubstantiated” and called the election for Vice-President Biden — although recounts, possible vote audits and litigation in numerous states are still pending. Even Republicans have expressed skepticism about the President’s claims. They have called on him not only to assert that voter fraud has occurred, but also to present evidence of such fraud and, critically, to show that enough fraud occurred to make a difference in key battleground states.

To date, the President’s legal team has presented eyewitness evidence of procedural irregularities in many voting locations, particularly in Philadelphia, Detroit and Atlanta — where, for example, Republican poll watchers were denied the ability to observe the counting of late-arriving ballots. Nevertheless, these reports of procedural irregularities have not yet conveyed the full scale of the fraud that likely occurred. Thus, to meet the challenge his critics have posed, the President and his team need to present a different kind of evidence altogether — and soon.

Fortunately for the President, there is plenty of evidence — much of it hiding in plain view — that can help to establish the scope of the likely fraud.

Since Wednesday morning, November 4, numerous statistical anomalies have emerged from the analysis of vote tallies in key battleground states — each, oddly, where the President previously had large leads. These anomalies, individually and collectively, constitute an unmistakable statistical signature of intentional manipulation of the vote — i.e., fraud.

Presenting these anomalies — in conjunction with evidence of local procedural irregularities and compromised voting machines and software — will allow the President and his team to make a compelling case to the public, state legislatures and the courts that fraud has occurred on a scale that casts doubt on the legitimacy of the vote in contested battleground states. Moreover, since the statistical evidence is already publicly available, it can be presented to the public now without compromising the strength of the Trump team’s ongoing legal cases.

Abrupt Spikes in Votes for Biden

Consider just one such statistical anomaly: the abrupt vertical spikes in the Biden vote in Wisconsin, Michigan and Pennsylvania.

Late Tuesday, election night vote counting inexplicably stopped in critical battleground states — including Wisconsin, Michigan and Pennsylvania. At the time, the President had sizable leads in Wisconsin and Michigan and an overwhelming 14% and 700,000 vote lead in Pennsylvania. Then, first at 3:42 am and again just after 6:00 am Wednesday morning, two huge batches of new Biden votes were suddenly tallied in Wisconsin and Michigan, respectively.

At the time, in Wisconsin, Trump had been holding a commanding 3.6%, 108,656 vote lead, with over 3 million votes already counted. Moreover, he had held a consistent lead of 4% or more for over seven hours since the polls had closed. Then, a sudden spike in the number of Biden votes completely wiped out the Trump lead in a split second. This spike was produced by a huge dump of 168,542 votes (5% of the state total) that included 143,379 (or fully 85% of the batch) for Biden.

In Michigan two hours later, 138,339 new Biden votes were suddenly added to his tally without any new Trump votes included. These votes, and a subsequent Biden surge, eliminated most of the roughly 5% lead the President had been holding there at the time.

Earlier in the evening at 10:23 am, attentive viewers witnessed 19,958 Trump votes suddenly subtracted from his Pennsylvania total and added to Biden’s. Then later in the day Wednesday, a similar vote dump of 23,277 Biden-only votes were counted in the Keystone state, contributing, together with hundreds of thousands of other questionable late-arriving ballots (including big batches in which Biden netted nearly 85-95% of the vote), to Biden ultimately overtaking Trump in current counts.

Screen captures of various election websites (including one of Nate Silver’s FiveThirtyEight site) documented these bizarre anomalous jumps in the Biden vote.

The mainstream press has widely reported that the 138,339 Biden-only vote surge in the Michigan vote resulted from an innocently misplaced decimal point that exaggerated the Biden-only surge by a factor of 10 and that the “typo” has subsequently been corrected. Curiously, by their own counting that would still leave a surge of roughly 14,000 Biden-only votes mysteriously appearing early Wednesday morning. Even so, Michigan state election officials have not offered a convincing explanation of how, given that supposed correction, Biden was still able to vanquish Trump’s 5%, 208,000 vote lead so quickly or why Trump never regained his lead — even temporarily — after the supposed correction. Nor have they explained why no discernible abrupt subtraction in the Biden vote was ever reported as new vote tallies came in. Moreover, subsequent analysis by data scientists have shown not one, but two, distinct large discontinuous jumps in the Biden vote in Michigan.

Others have argued that these surges can be explained by vote counters grouping ballots by candidate first and then reporting them all at once. But this explanation is not remotely plausible.

First, outside the contested battleground states no similar surges in either Biden-only or Trump-only votes have been reported. And certainly there have been no spikes of the magnitude reported in these three states.

Second, for counters to group the ballots in the way proposed, vote counters would have had to either manually count or inspect all these ballots. But vote counters typically do not do manual counts on election night and never do so with the number of votes in play here. Nor would they have any reason to inspect tens of thousands of ballots for top-line voter preference before sending them through electronic scanners. That would require an enormous duplication of effort since the scanners count, and therefore, also separate, the vote by candidate in the process of tabulation. In any case, most scanners today do not require opening absentee ballots first. Rather, they can automatically tear envelopes open and shake out the ballots for counting without having to be inspected by poll workers.

Instead, these abrupt spikes in the number of Biden-votes with few Trump votes represent an extremely improbable and suspicious deviation from established trends in the reporting of the vote, even considering trends in the most ardently Democratic counties. For this reason, these spikes — as represented by the vertical or near vertical lines on graphs showing the increase in votes over time — provide a clear “tell” or statistical signature of fraud and even help to identify when it occurred. 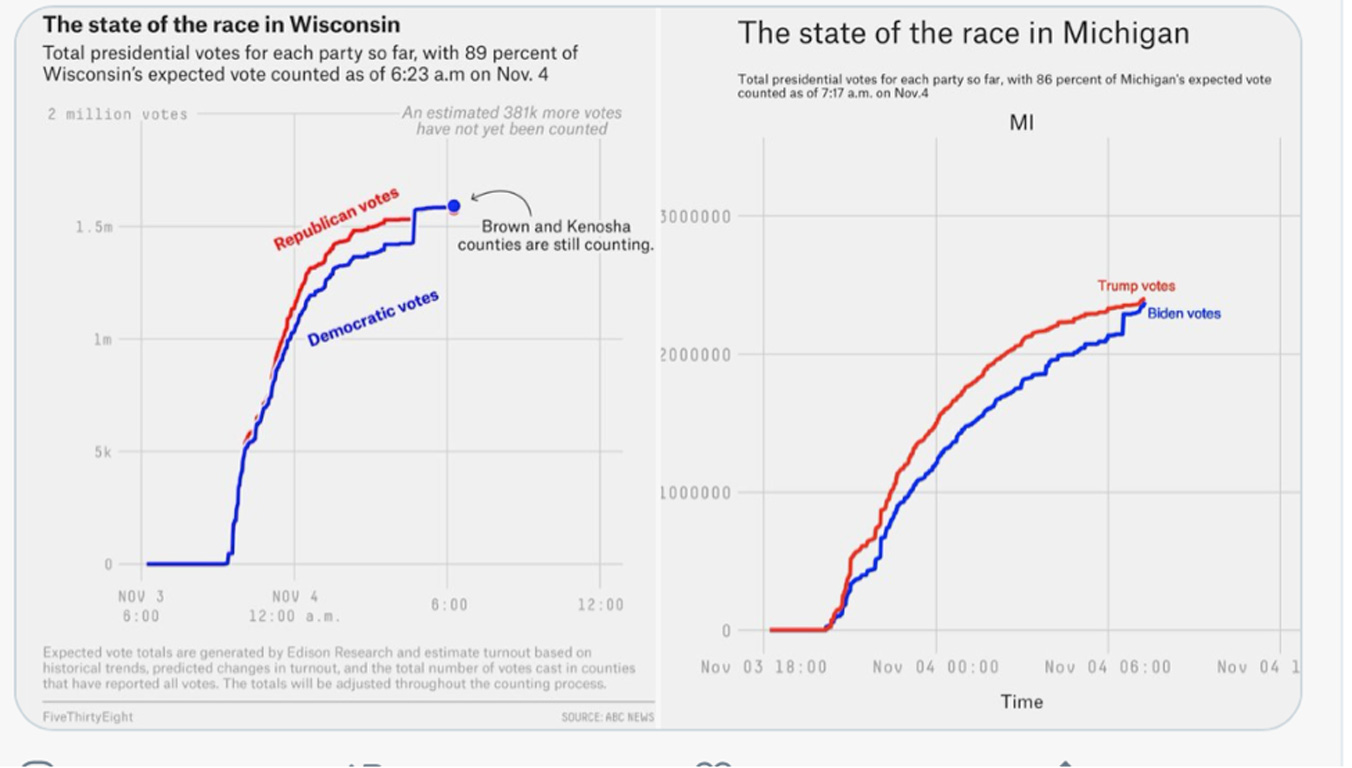 By presenting graphs depicting these sudden spikes in the Biden vote, the Trump campaign could quickly and persuasively demonstrate to the public — and to almost any reasonable person — why they suspect cheating. Further, the number of votes involved in these cases shows, contrary to the claims of Mr. Trump’s critics, that the scale of the cheating is potentially sufficient to sway the election. The number of votes (118,215) that Biden suddenly gained in the Wisconsin vote dump vastly exceeds his current lead in that state. Disallowing the Biden-only batches in Pennsylvania and Michigan would erase a large portion of Biden’s current lead in those two states where many other significant anomalies and irregularities have also been reported.

Many Other Improbable Anomalies

And, of course, many other statistically improbable anomalies have been noticed in contested states.

For example, consider the following:

(1) There are tens of thousands of ballots that include only votes for Biden and no other down-ballot Democratic candidates in battleground states. In Georgia alone, 95,801 such Biden-only democratic ballots have been identified.

(2) Biden had a hugely disproportionate advantage in absentee voting in Pennsylvania and Michigan compared to his much smaller advantage in such voting in all other states. 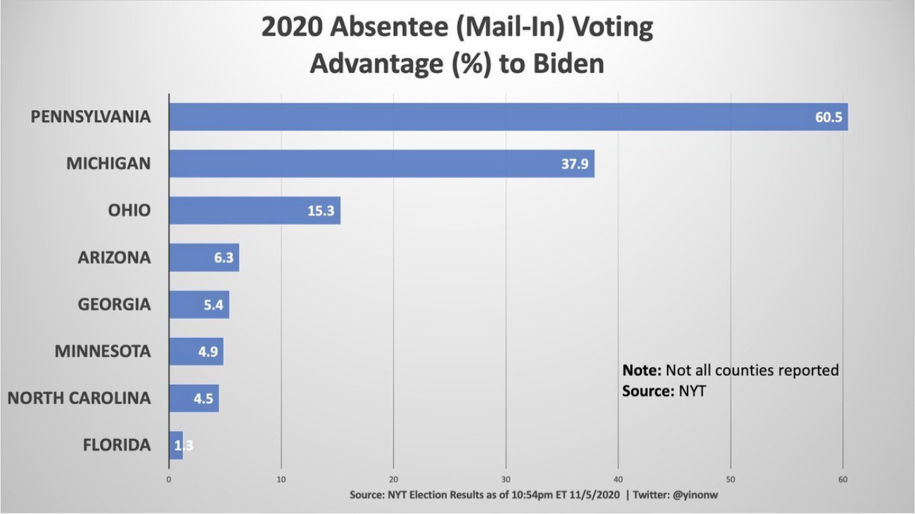 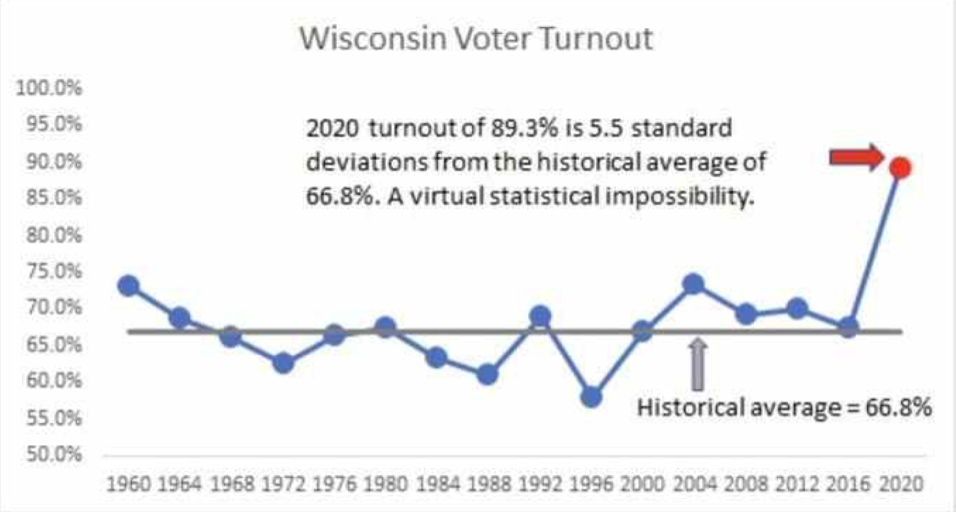 (4) There was almost entirely unidirectional slippage in Trump’s margins after counting of late ballots resumed in Wisconsin, Michigan and Pennsylvania. And this was without many temporary jags or increases in Trump’s direction as would be expected from an ordinary process of reporting the vote.

(5) Biden had a lopsided lead in late counting of mail-in ballots in Wisconsin, Michigan and Georgia despite Republican advantages (43%-35% in Wisconsin, for example) in requests for, and returns of, such ballots. 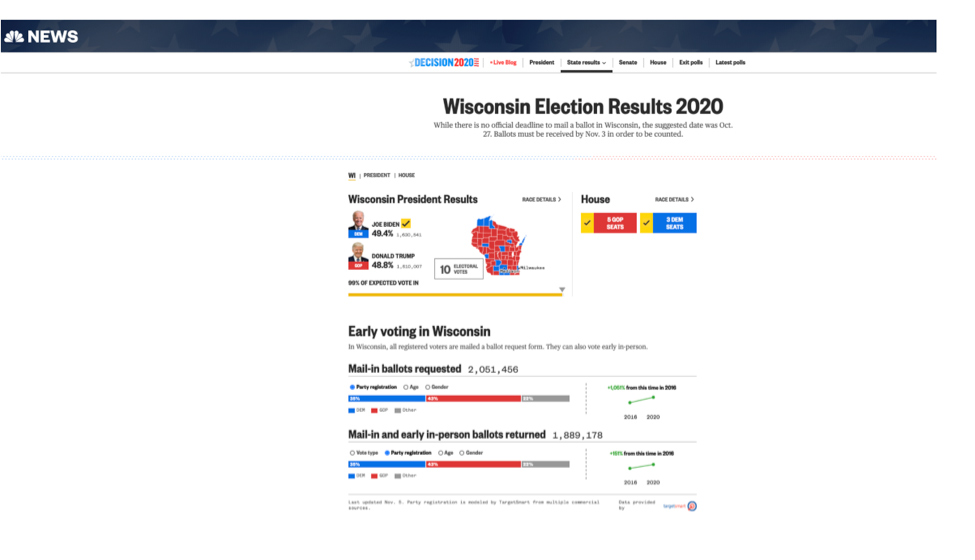 (6) Pennsylvania had a historically and extremely low percentage of rejected mail-in ballots (1/30th the usual rate).

(7) Trump vote margins dropped steadily Thursday after election day in Pennsylvania and Georgia as new Biden votes were apparently found and yet this didn’t seem to change the percentage of the vote counted.

(8) 19 of the 20 most reliable bell weather counties in the country voted for Trump.

(10) Finally, Biden outpolled Barack Obama — the most popular Democratic president since John Kennedy — in key counties in battleground states. This was despite historically-low pre-vote measures of enthusiasm for his candidacy. In Pennsylvania, for example, Biden received between 24% and 43% more votes than Obama did in 2012 in the crucial counties of Chester, Cumberland and Montgomery despite extremely modest population growth in those counties;

Any one of these (and other) identified statistical anomalies should raise suspicion of fraud since these patterns would have been unlikely absent some intentional manipulation of the vote. Yet to suppose that all of these anomalies in contested battleground states occurred without major interventions strains credulity — in the extreme.

The Trump legal and campaign team needs to present the media with this statistical evidence, and share it with the public now. This will help cast doubt on the legitimacy of the vote in contested states in a way that simply spotlighting local procedural irregularities cannot.

Highlighting these statistical anomalies visually with easy to understand charts (see examples above) will also allow the campaign to put the Biden team on the defensive and allow team Trump to retrieve the moral high ground. That in turn will buy the president’s team time to make a more comprehensive, multifaceted legal case that may include not only statistical evidence of fraud, but evidence about the suspicious design and manipulation of voting machines, the back-dating of ballots, the counting of legal and illegal mail-in ballots in secret, dead people voting and other egregious irregularities.

Even before making that legal case, however, the Trump campaign should consider presenting evident statistical anomalies to the public and state legislatures. Doing so will build support for both legal and legislative remedies for the industrial-scale fraud that has — in all likelihood — taken place.

Michael Del Rosso is Vice President and Senior Fellow of the American Strategy Group, a think tank dedicated to understanding the strategic threats to the United States. Previously he was Chief Technology Officer at three large public technology companies. His broad fundamental design experience across a range of computer technologies includes extensive experience designing a range of cyber security technologies. He is also past Chairman of the IEEE-USA Critical Infrastructure Protection Committee (CIPC).