Same-Sex “Marriage” and the Persecution of the Hobbits

Back in the ’90s, speech codes were all the rage. Every left-wing academic activist was urging the imposition of speech codes on students and professors, and all the conservatives and old-fashioned civil libertarians (we still had some of those around in the ’90s) were arguing against them. We won the speech code war, at least at public universities, and life went on.

Who could have dreamed that, come 2015, it would be more dangerous to be a conservative Christian florist or a pizzeria owner in America than to be a conservative professor or columnist? Don’t misunderstand me. It’s not as though conservative academics have it easy. Even tenure may be revoked, at least at a private university, if you say something politically incorrect and make the wrong people angry. If one isn’t tenured, one probably should keep quiet and fly under the radar to have a hope of making it in the academy. Still, bad as it would be to lose one’s job, it wouldn’t be quite as bad as losing one’s home and life savings. It’s the latter that might just happen to courageous florist Barronelle Stutzman, if bullying Washington State Attorney General Bob Ferguson has his way.

By now we all know the story: Stutzman refused to provide florist services to a homosexual “wedding” and brought down the full fury of the bullies upon her, but she isn’t backing down. Or 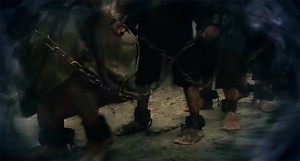 consider the owners of Memories Pizza, inundated with death threats when they gave the “wrong” response to an inquisitive reporter. Like the minions of Saruman who inundate the Shire in J.R.R. Tolkien’s Lord of the Rings, the thugs come down upon those who have little defense and try to beat or terrorize them into submission.

I’m not making any confident predictions. I would like to think that the heavy-handed tactics of the left will backfire, causing sympathy to swing around to their victims, but that may or may not happen. Even if sympathy swings around, the legal climate may become so strongly pro-homosexual and pro-same-sex-“marriage” that sympathy is of little effect.

Whatever happens, I want my fellow conservatives and maybe a few libertarians to notice who the new foot soldiers are, the ones taking the heat and standing to lose the most: They are not pundits, theorists, or thinkers. Nor are they big businesses. In fact, the big businesses along with what Robert Bork called the “chattering classes,” the elites both economic and intellectual, throw their weight behind the oppression of the little guy. It is upon the bakers, the florists, the photographers, and, of all things, the proprietors of a pizza parlor that the might of the left is falling, and none of them have tenure to protect their freedom of speech.

These are the hobbits. They are the ordinary folk, the humble, the unlikely heroes, the small-time entrepreneurs. The denizens of the Shire do not live their lives by theory, but they do prize their freedom to live, to work, to farm and to keep the proceeds of their labor. This freedom, Tolkien points out to us, is always more in peril than the hobbits themselves realize, and indeed in The Lord of the Rings it is very nearly lost. Even after hobbits play a decisive role in destroying the ring and defeating the evil Sauron, they almost lose their beloved Shire to Saruman. The chapter describing the episode comes near the conclusion of the story, in a chapter entitled The Scouring of the Shire.

In the end, the little folk are roused to their own defense and drive the bullies out, but what if there had been even more thugs with even more power? What if the king himself, instead of being the noble Aragorn, had been an ally of Saruman?

If you are one of the foolish Republicans or libertarians who are advocating same-sex “marriage,” I ask you to think about this. If you think that this is a movement toward more freedom, you just aren’t reading the news. More than that, whatever your theory may be, you are doing what you can in practice to further the cause of the bullies and the haters of freedom.

I don’t know who is going to win this war, in the short-term, purely human, political sense of “win.” Even Tolkien knew that evil might be allowed to conquer for a time by the power of might over right. But I do know which side I want to be on, to the very end, and it isn’t the side of those who are persecuting the hobbits.