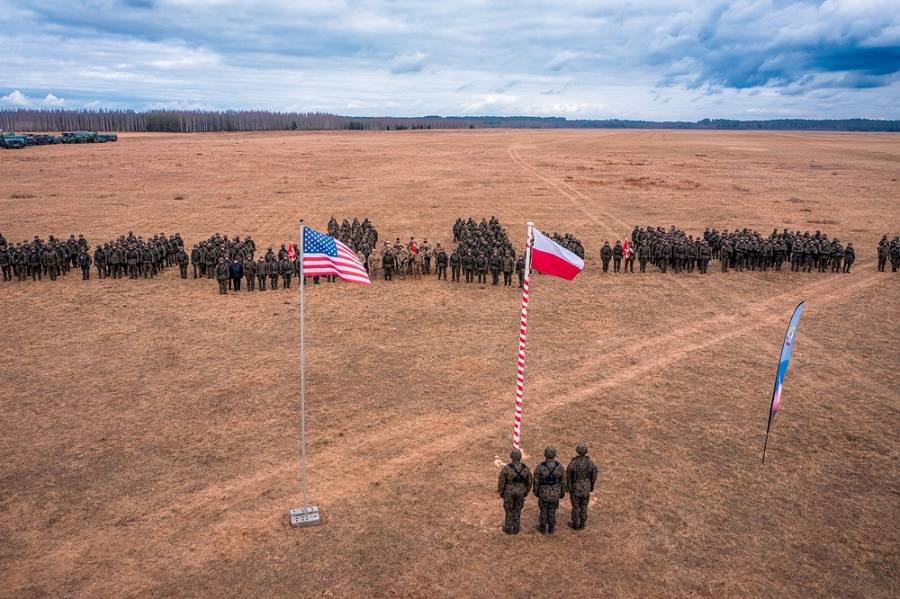 Polish and U.S. Army soldiers participate in a closing ceremony for a training exercise on February 22, 2022, in eastern Poland.

Ukraine has inspired the civilized world with the unflinching courage displayed by its troops and leaders amid the brutal invasion ordered by Russian dictator Vladimir Putin. While valiant Ukrainian forces and civilians have rightfully seized the spotlight, brave American service members are also making sizeable sacrifices to counter Russian aggression.

As the AP report noted, Staff Sgt. Jackson is one of about 12,000 U.S. troops who are being sent to reinforce service members already stationed on American bases in countries like Poland, Germany, Romania and Latvia. As seen in the above photo recently taken in Poland, their primary duties – for now – involve training alongside soldiers from fellow NATO countries. Some will also help process refugees pouring into countries that border Ukraine.

“There is no intent to have any U.S. service member fight in Ukraine,” U.S. Army Maj. Gen. Charles Costanza told the AP. “And they know that.”

Still, the possibility of being thrust into a potential World War III scenario is undoubtedly in the back of each brave U.S. service member’s mind, especially those leaving their families to deploy to the suddenly volatile region. After all, the president of Russia issuing a nuclear threat is not something that can be ignored.

“You know this isn’t a new thing — deploying away from the family,” U.S. Army Sgt. 1st Class Joshua Cooner, a husband and father of three, recently told Stars and Stripes. “Even though there is all the uncertainty of everything around this deployment, honestly, I think, for me, and for my family, it was almost easier because we didn’t have a lot of time to like think, you know, we’re leaving in three months, then two months. That countdown. This scenario is almost like ripping off the band-aid and being like, OK, well, we’re going, that’s it.”

Please pray for Sgt. 1st Class Cooner, Staff Sgt. Jackson and all the selfless service members and military families who are making very real sacrifices to help other nations in need. While they are not currently on the front lines, our extraordinary troops are making a difference by standing together with NATO allies.

Most importantly, please keep praying for Ukraine. May God shield all the innocent Ukrainian people whose lives have suddenly been uprooted by senseless violence and despair.

Lost amid all the coverage of the Ukraine crisis is the fact that thousands of American service members are still risking their lives in Iraq and Syria. There are still about 2,500 U.S. troops in Iraq and approximately 900 in Syria.

Even after the killing of ISIS terrorist leader Abu Ibrahim al-Hashimi al-Qurayshi early last month, American forces are facing ongoing threats in both countries. As The Jerusalem Post recently noted, a newly released Pentagon report confirmed that drone attacks are a huge concern for U.S. military commanders in the Middle East. The Stream has extensively covered drone and rocket attacks aimed at coalition troops stationed in both Syria and Iraq.

“Overall, the report paints a picture of increasing Iranian-backed drone threats,” The Jerusalem Post reported. “Although Iran paused the attacks in the last months of 2021, it has increased its capabilities.”

Just because much of the world is rightfully gripped by the invasion of Ukraine doesn’t mean we should turn a blind eye to the serious threats still posed by rogue regimes like Iran and brutal terrorist groups like ISIS. Thankfully, the brave men and women of our military haven’t taken their eyes off the ball and are still volunteering to put themselves in harm’s way to confront evil. Please pray for the safety of each and every American warrior serving in the Middle East.

A group of U.S. Navy sailors is back home after several months at sea aboard the USS Washington fast attack submarine. 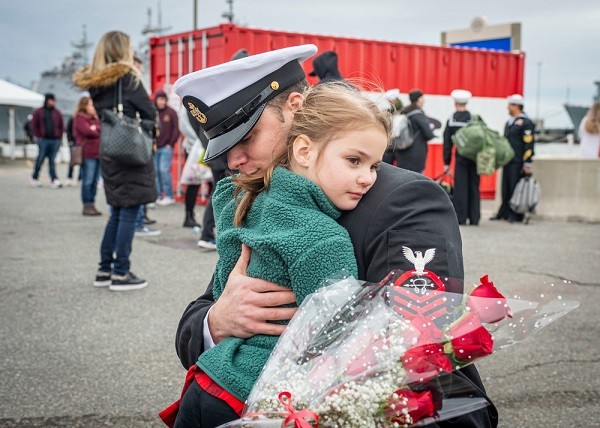 A U.S. Navy sailor serving aboard the fast-attack submarine USS Washington embraces his daughter during the boat’s homecoming to Naval Station Norfolk in Virginia on February 27, 2022.

Welcome home, heroes! Thank you for your service and sacrifice on behalf of our nation.