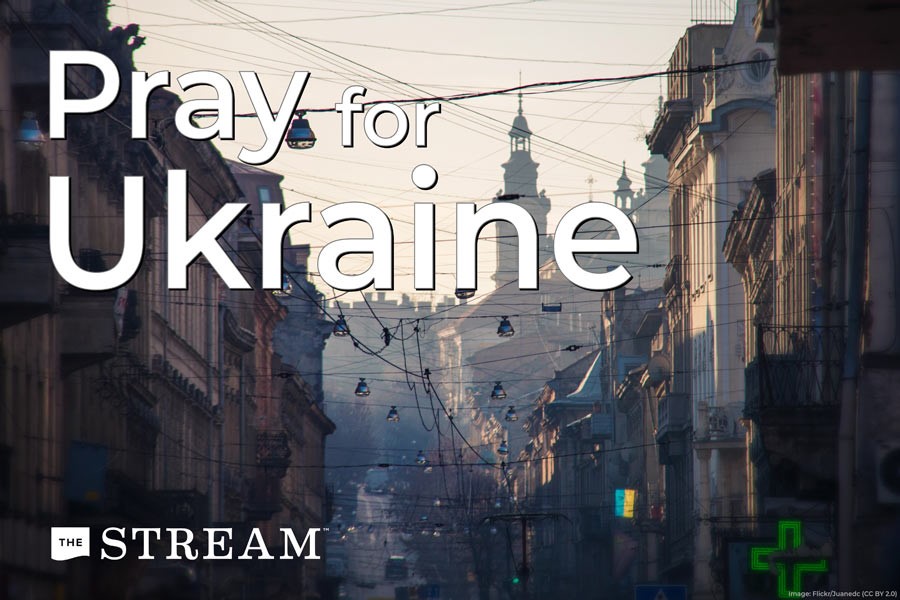 Russia has “shattered peace in Europe” in one night.

In the early hours of the morning, billows of smoke could be seen rising above several major Ukrainian cities that were targets of Russian shelling and rocket attacks. The onslaught began only minutes after Russian President Vladimir Putin declared that he would be conducting a “special military operation” in the neighboring country. It quickly became clear that the operation was a full-scale invasion.

Thousands of Ukrainians are trying to leave the capital city of Kyiv, causing major traffic jams, while others are choosing to stay, ready to fight for the right to live in their own country with their own government. Casualties of the day-old war are already in the hundreds and still climbing.

As these Ukrainians, and surely so many others like them, are driven to their knees in prayer, we should join them.

As innocent civilians watch in terror as their country is invaded by one of the world’s most sophisticated militaries, here are five ways you can pray for Ukraine:

1. Pray for the people of Ukraine.

The Ukrainian people are tough, and they’re not surrendering without a fight. Ever since the fall of the Soviet Union in 1991, Ukrainians have learned the value of having their own sovereign democratic country, and many don’t want to return to being ruled by yet another Russian autocrat, no matter what the cost.

Ukrainians don’t know what the future holds for their country. In a moving scene on live TV, CNN’s Clarissa Ward captured footage of a small group of Ukrainians kneeling to pray in a city square in Kharkiv in the freezing cold.

As these Ukrainians, and surely so many others like them, are driven to their knees in prayer, we should join them. Pray for safety for the people of Ukraine, that residential areas would not be targeted, and that God would comfort those who are afraid. Many Ukrainians are Christian; pray that their faith would be strengthened to withstand this trying time.

2. Pray for wisdom for world leaders as they respond to the Russian invasion of Ukraine.

“Russia alone is responsible for the death and destruction this attack will bring,” President Joe Biden rightly said in a tweet this week. However, world leaders bear the responsibility to respond, and the choices they make even in the next few days can shape the course of history.

Pray that they would have wisdom as they make decisions regarding sanctions, military support, and other means of deterring Russia and supporting Ukraine.

3. Pray that churches and Christian ministries in Ukraine would be equipped and ready to help in the event of a humanitarian emergency.

Ukrainian church leaders were already grappling with how to respond to an imminent invasion from Russia. Now that one is underway, they will need to lead their congregations with wisdom and courage.

The possibility of a refugee crisis becomes even more likely during a war, and churches and Christian ministries will inevitably be at the forefront, providing assistance and spiritual and material help to the displaced and hurting. Pray that God would prepare and equip ministries to aid those in need.

4. Pray for a change of heart for Russian leaders, that they would turn from war and aggression and choose peace.

Yesterday, the Ukrainian Council of Churches and Religious Organizations sent an open letter to Russian President Vladimir Putin, requesting that he end his invasion. On their behalf, Chairman Hryhorii Komendant wrote:

Today we pray to the Creator of the Universe with a special request for wisdom for those who are authorized to make decisions so significant for the whole world, in whose hands the fate of humanity has turned out to be. This applies primarily to you, Mr. President of the Russian Federation. This prayer of ours is filled with hope for the generosity of the Almighty God and the openness of the heart that accepts grace.

5. Pray for peace and the expansion of freedom.

Recent years have seen a decline in freedom around the world — the Chinese government choked Hong Kong, the Taliban took control of Afghanistan, and military coups took over Sudan and Burma. This is a dangerous time for the free world and a devastating one for the people who now live under oppression.

As Putin attacks Ukraine, peace and freedom are once again under siege. This conflict benefits very few people, and even some people in Russia see that. Despite extensive government propaganda, some Russians have protested Putin’s invasion of Ukraine. In response, Russian authorities have cracked down on their own citizens, arresting at least 1,700 protestors in 53 cities.

Pray for peace in Ukraine and throughout Europe. Pray that plans intended for evil would be thwarted. Pray for the expansion of freedom around the world.