Zelensky's words for the ages 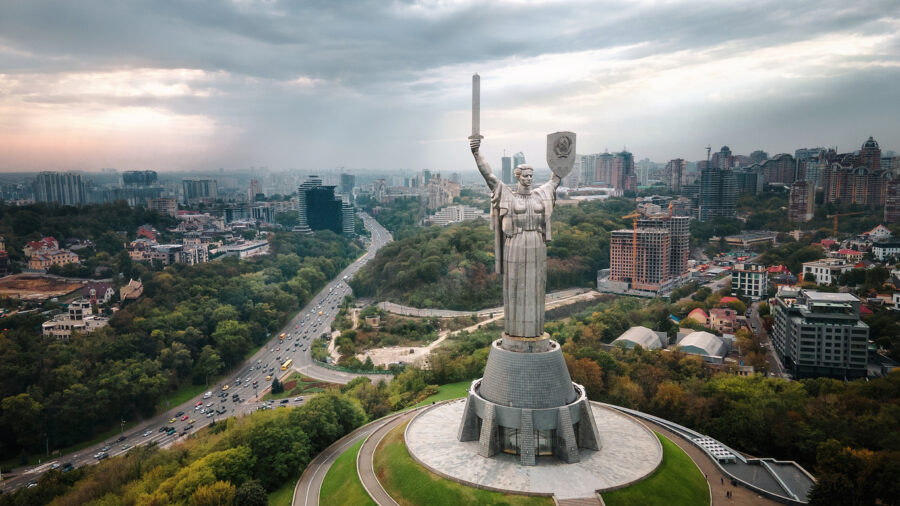 "Motherland" is a monumental sculpture in Kiev on the right bank of the Dnieper.

Or at least as happy as we can make it with Russian nuclear forces on heightened alert.

But at least there’s talk of negotiations between Russia and Ukraine.

Ukrainian and Russian Delegations Agree to Meet at Belarus Border

A Ukrainian delegation has agreed to meet Russian officials for talks at the Ukraine-Belarus border, President Volodymyr Zelensky’s office has confirmed. The US Ambassador to the United Nations, Linda Thomas-Greenfield, told CNN’s State of the Union the US will “look forward to what comes out of those discussions.”

The offer to meet comes as Russia is finding a much tougher fight on its hands than expected.

Apparently those blankets Obama sent a few years back have done wonders to block the Russian advance.

John Zmirak has an in-depth look at Ukraine history, particularly in the post-Cold War era. “An Independent Ukraine. Who Caused Its Death?”

Vladimir Putin has raised the alert status of his nuclear forces to “special regime of combat duty.” Or in English, on a higher alert in preparation for possible use.  This escalation increases worries the Ukraine-Russia conflict could go nuclear. It also suggests Putin knows things aren’t going as planned, and he’s made the move to increase his bargaining chips. This video aired by CNN claims to show a Russian column that had a very bad day while rumbling through a Kyiv neighborhood.

CNN has geolocated video appearing to show the destruction by Ukrainian forces of a column of Russian armored personnel carriers and other vehicles on the edge of Kyiv, Ukraine: https://t.co/5iRvWHNPwR pic.twitter.com/zIvnhVSdZs

NATO has responded to Putin by announcing more weapons are headed Ukraine’s way.

Zelensky Offers a Quote for the Ages: “I Need Ammunition, Not a Ride”

The Russian Army is gunning for Ukraine President Volodymyr Zelensky. Putin’s goal with this invasion is to “decapitate” the Ukrainian leadership. Bombs and missiles are dropping on Kyiv. Russian troops pushing on the capital city. And where’s Zelensky? In the streets with his people.

The U.S. offered to evacuate Zelensky to safety. He responded with a line for the ages: “I need ammunition, not a ride.”

“I need ammunition, not a ride.” Carve that on a monument.

Compare this to Canada’s Justin Trudeau, who hid when some of his own peaceful truckers swung by his capital for a chat. Or Joe Biden, who spent the weekend hiding in Delaware.

If Ukraine is able to fend off Russia and force negotiations, much credit will go to the spit and vigor and example set by its young president.

Zelensky was a comedian by trade. When compared to doing stand-up in front of a drunk, hostile audience, maybe standing up to the Russian Army doesn’t seem so tough.

The White House sanctions on Russia are notable for what Biden is not targeting: Russia’s oil and natural gas industry. On one hand, this prevents gas prices from going even higher. Which is the White House explanation. On the other hand, this means Putin continues to rake in billions. In essence, be rewarded for his aggression.

Amazingly, despite Trump leaving us energy independent … in a position to tell Putin where he can shove his oil … Biden has us importing oil from Russia.

From Tristan Justice at The Federalist:

From Russia, the United States still imports nearly 600,000 barrels of oil every day. In contrast, the Keystone XL Pipeline Biden shut down was supposed to transport 830,000 barrels at peak capacity. Biden didn’t sanction the Russian energy sector, because he couldn’t have. Trump could have, and probably would have.

Obviously, if you want to hurt Putin, help America, and wean our European allies off their addiction to Putin energy, you ramp back up American oil and natural gas production. However, if you’re this White House, you do the opposite.

Jen Psaki told This Week with George Stephanopoulos, Biden’s approach to reducing dependence on foreign oil is through green energy.

Again, Jen. WE WERE ALREADY ENERGY INDEPENDENT … UNTIL YOU CAME ALONG!

Rigged elections have consequences. 62% of voters believe Russia would not have invaded Ukraine if Trump were still president. That includes 38% of Democrats. This according to Harvard Center for Political Studies/ Harris poll released Friday.

59% say Putin invaded because he saw “weakness” in Joe Biden.

Ironically, in 2019, the boastful Biden said, “Imagine what could happen to Ukraine under Trump.” Biden sold himself during the 2020 campaign as the one guy who would stand up to Putin. Once he climbed out of the basement.

As Trump pointed out in his CPAC speech Saturday night, Putin invaded his neighbors during the Bush Administration, the Obama Administration, and the Biden Administration … but not during his administration. And it wasn’t like Putin held back on his aggression because he was busy binge-watching Netflix.

Meanwhile, plop another one in the “Trump had it right” file. Germany announced they’re jacking up their defense spending to 2% of GDP in response to Putin’s aggression. Just as Trump was pushing the NATO nations to do years ago.

Another Genius Move: US Gave China Intel About Russia Build-Up. China Gave the Intel to Russia

For three months, the U.S. shared intelligence with China about the troop buildup on the Ukraine border, trying to convince China to help stop an invasion. And according to the New York Times, China rebuffed the U.S. and simply gave the intel to Russia.

Chinese officials rebuffed the U.S. and shared the information with Moscow.https://t.co/Ngbuu9P3n1

Just last summer, China and Russia conducted naval exercises together. And these geniuses in the White House thought China would cooperate with the U.S. against Russia?

Then again, maybe we shouldn’t be surprised. Remember when Chairman of the Joint Chiefs Mark Milley admitted he told his Chinese counterparts he would give them a heads up if Trump took military action against them?

We’ve gotten used to Saturday Night Live’s cold openings not being funny. But Saturday night’s opening was serious and poignant and beautiful. The show began with a performance by the Ukrainian Chorus Dumka of New York.

Here’s “A Prayer for Ukraine.”

We Can Pray and We Can Help

Our parent organize LIFE Outreach, International has put out a call for prayer and an opportunity to help the people of Ukraine. Said James Robison:

We must pray for the people of Ukraine in their hour of need — families are fleeing because of the danger, and their hearts are filled with fear. Pray for our Ukrainian brothers and sisters in Christ.

Also pray for the Ukraine LIFE Center that has been such a blessing to children in need. Pray for the mission workers who will do all they can to keep the children safe.

PLEASE PRAY and give to help with relief efforts for the thousands caught in harm’s way. We as Christians must run to those in need and give comfort and aid. May God take this evil and use it for His glory.

As we prepare for Lent, an offering from James Tonkowich, “Lent: Baking Cakes, Building Bridges, Changing the World.”

A mind-bending one from Mind Matters, “Deepfakes Can Replicate Human Voices Now, Maybe Yours.”

The Russia-Ukraine war isn’t the only thing going on. We will have a “Brew Extra” dropping in the near future.