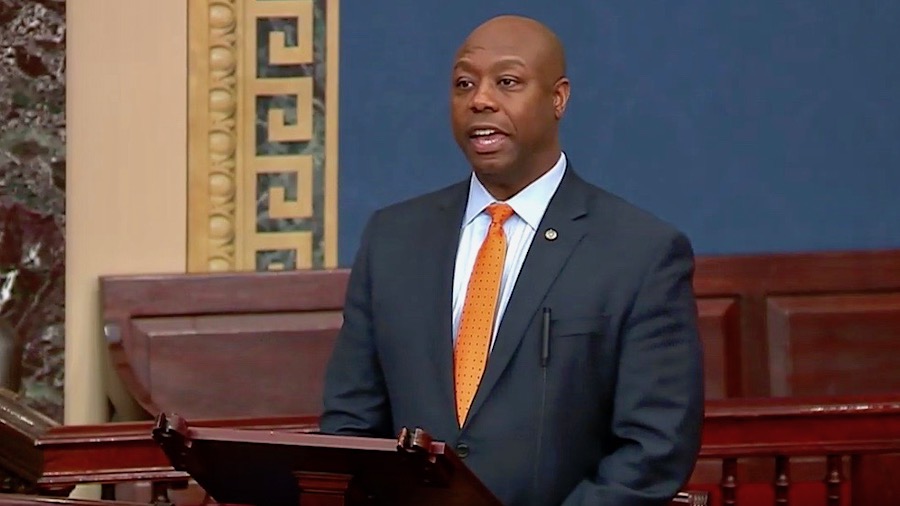 Only weeks ago, Senator Tim Scott, R-S.C., weighed whether to support the most expensive legislation ever brought before Congress.

When faced with whether to vote yea or nay on the Coronavirus Aid, Relief, and Economic Security Act, or CARES Act, on March 25 — price tag of $2.2 trillion dollars — he said he discussed one question with his conservative colleagues.

“Is there a better and more effective path to stabilizing this nation from falling off of a financial cliff?” recounted Scott in a phone interview on Thursday. “The answer was simply no.”

The bill passed the U.S. Senate by a vote of 96-0. President Donald Trump signed the bill into law on March 27.

Three economic stimulus bills designed to provide relief related to negative COVID-19 economic impacts have currently been enacted. A “phase four” relief bill is now being proposed — with party leaders diverging on where further funding should be directed.

Speaking from his office in Charleston, S.C., Scott shared his views on how the relief bills will help restart the economy. He also addressed the current COVID-19 situation and the innovative strategy he has worked on with President Trump to jump-start job growth.

High Cost of Tackling A Pandemic

Things have been moving fast in Congress on these coronavirus-related bills. Could you describe the three relief bills that have already been enacted as law?

Senator Tim Scott: Phase one and phase two really sought to provide temporary and targeted relief to folks who have been impacted negatively by the virus. Phase two established new guidelines as it relates to paid leave as well as family medical leave being expanded. It also increased or enhanced benefits to assist folks who are on Medicaid and provide food stability.

Phase three was much larger — a $2.2 trillion dollar mammoth. It passed unanimously in both houses. The goal was three basic tranches. One was for large or mid-sized businesses. We put about $500 billion dollars into something called a commercial paper facility, which basically means mid-sized businesses and larger can receive access to financial assistance — loans, not grants, so they have to be paid back.

The second part of that [phase three] bill has to do with small businesses. Half of America works for a small business. We wanted to make sure that we protected paychecks and kept people employed and not in the unemployment line. We put $350 billion dollars into that program.

How big is the Senate's coronavirus rescue plan? @usatgraphics needed the full cover of @USATODAY to fit the chart. https://t.co/J34v0esOlA

The third area is the direct assistance area, which would include the unemployment benefits that are made available; the federal government enhanced state benefits by $600 per week for 16 weeks. In addition to that, we have included $1,200 per person.

Should conservatives be concerned about the $2.3 trillion combined cost of these enacted economic stimulus bills, as well as oversight issues?

Scott: No doubt, our national debt is looming and we could see that as a vulnerability. It’s a resourcing issue: how do we fund this relief and tackle the debt in the aftermath of it?

The first question I asked myself as well as my conservative colleagues was: Is there a better and more effective path to stabilizing this nation from falling off of a financial cliff? The answer was simply no — by a vote of 96 to zero, with four senators in quarantine because of the pandemic.

The second question we ask ourselves is: As we look to the future, how do we wrestle with the debt that is being created?

Saving Lives — And the American Dream

What is the answer to that second question?

Scott: The fastest way for us to wrestle with that debt has been to grow our economy. What we saw as a result of the 2017 tax cuts was more revenue, not less revenue coming into our Treasury. We saw our economy catch on fire, where we had the lowest unemployment rates ever, basically. And then we saw the lowest unemployment rates for every sector of the economy and every demographic in our nation.

If we’re going to tackle the debt in the aftermath of this pandemic, we’ll have to do two things. Number one, we’re going to have to tackle it by stimulating economic activity. When we came in from the Obama years, if we were able to increase by 0.5% the growth of our GDP, that led to about $800 billion dollars of relief from our national debt, I believe the number was.

As we continue to see growth over 1.9% — which we have had for all three years of the current administration — we will be in a position to see the debt fall precipitously. And the other thing we’ll have to do is to manage better our entitlement state, which accounts for 68 percent of all government spending.

Looking at the situation in your home state of South Carolina, public health officials are closely tracking COVID-19 cases and related deaths. Do you view this crisis as a pro-life issue?

Scott: I certainly see the correlation in that concept. There’s no question that there is an opportunity for us to wrestle with how to save lives through the protocols established by our governor. Recently, he issued a stay at home ordinance, and that is going to save lives. From the life perspective, what we can do to proactively reduce the mortality rate is follow those protocols and we’ll find ourselves in better shape.

We’ve all heard Dr. Fauci and Dr. Birx state the estimate of 120 to 240 thousand lives that could be lost to this virus. But when I spoke to them both recently, they said that curve can be bent. In other words, we can flatten the curve even more and lose fewer lives if we practice the social distancing protocols: washing our hands, not touching our faces, and making sure to sneeze or cough into a cloth. These are things that actually will save lives. And if we do so, that will be one of the victories from a pro-life perspective.

The Land of Opportunity

Recent reports indicate that COVID-19 affects African Americans more severely than people of other ethnic backgrounds. What are the facts on this issue, and have you been raising it to the White House?

Scott: I had a great conversation with the administration on this very topic a couple of days ago. We are doing calls this week and in the weeks ahead with minority leaders.

The one clear red-hot spot that I saw in the map was really not in America. It was, frankly, from Italy. Among the Italians, 76 percent of the folks who died had the underlying morbidity of high blood pressure. In America, those who have the highest incidence of high blood pressure are people in the African American community, followed by the Hispanic community and Native Americans. Add on top of that asthma, literally the same two co-morbidity issues in Italy.

We find very quickly that that correlation is true, whether you’re Chinese or you’re Italian or whether you’re black in America. In this nation, the highest concentrations of those co-morbidities that lead to death are found in African Americans. And I’m quite thankful that the president has been serious about tackling this issue head-on.

To draw from your book Unified, why is it important for conservatives to seriously grapple with these issues of racial injustice and race-based economic disparities?

Scott: Well, at the end of the day, it’s good for the country.

One of the benefits of writing that book with Trey Gowdy was we got to know each other far better and share intimate knowledge of who we are. We learned how we are different and how, frankly, 95 percent of the time, we are very much the same. When conservatives lead on the issues of race and equality, what you’ll find is you’ll have better solutions that work for everyone.

The beauty of the American dream — and you’ll find this in my new book, Opportunity Knocks — is that it works for everyone. Anyone from anywhere at any time can achieve the American dream. And when conservatives lead, if that concept of the invisible hand empowers each person to be a part of the decision-making apparatus in our country, that is the fastest way to grow the pie.

You’ve championed a novel strategy to jumpstart job growth “without burning money” as you state in Opportunity Knocks. Could you explain opportunity zones?

Scott: The president and I worked on this issue together. We found that, by deferring capital gains tax, people would be willing to make a long-term investment in some of the most distressed communities in the country. By doing so, we have seen increases in wages in the opportunity zones and certainly increases in property values.

Said differently, we’re closing the gap between the haves and the have-nots. We’ve seen this great employment strategy start putting fruit on the vines.

As an elected public official, you face criticism from many sides which has intensified during this election season. How are you able to respond with civility in this environment?

Scott: There is no bigger reason and no better reason for me to respond with love than to remember Matthew 5:44, which says, “Love your enemies, and pray for those who persecute you.”

In Opportunity Knocks, you’ll read a few stories of that Matthew 5:44 response because I have had to live it. That can be a painful process, but it always leads to good.

Ultimately, it’s the Romans 8:28 impact or effect, which says: “God works for the good of those who love Him.” God takes what the enemy meant for bad and he turns it into part of a praise story.

Explore The Stream’s complete coronavirus coverage, and sign up to receive top stories every week.