More than 2,200 U.S. inmates head home this month due to “earned good time.” Restorative justice leaders working with the Trump administration reveal why it's significant. 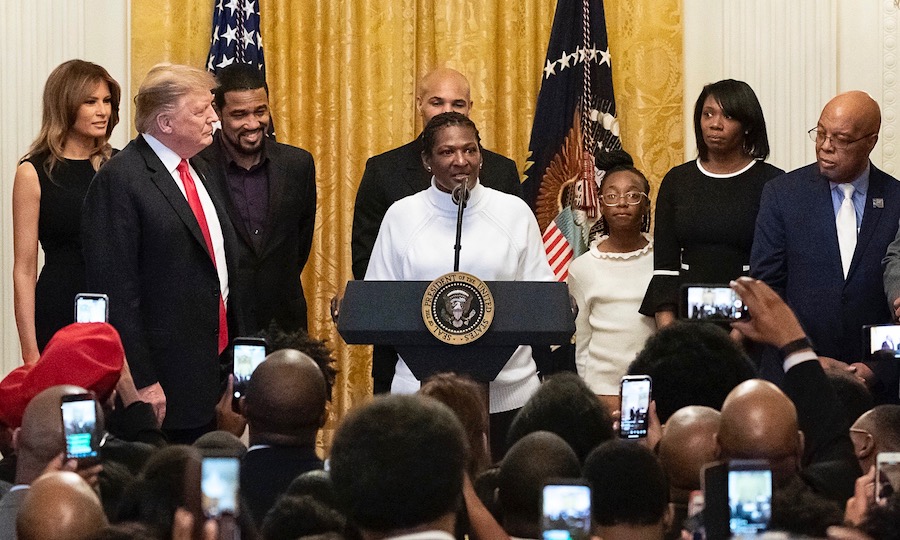 President Donald J. Trump and First Lady Melania Trump look on as Catherine Toney delivers remarks on Feb. 21, 2019, in the East Room of the White House. Toney was one of the first women released under the First Step Act.

As families across the U.S. celebrate their freedoms this week, thousands of formerly incarcerated Americans will cherish Independence Day with newfound significance.

Thanks to the First Step Act, approximately 2,200 ex-prisoners will reunite with their families in July. Having served time in federal prisons, they have undergone counseling and training to take advantage of good-time credit.

“These are folks who made a bad decision at some point in their lives and have taken responsibility for it,” said Jessica Jackson, an attorney and national director of #cut50. “Having done the work and been transformed, they’re coming home wanting to do better.”

The Importance of Second Chances

Jackson recounts the story of Catherine Toney. She had reunited in Mobile, Ala., with her daughter — and her granddaughter, whom she had never met. “She’s now working at Walmart full-time,” said Jackson, whose group helped Toney. “She’s back to work and excited to be contributing to society again after serving such a long sentence.

FIRST STEP is an acronym for Formerly Incarcerated Reenter Society Transformed, Safely Transitioning Every Person. A remarkable bipartisan coalition came together in early 2018 to back the landmark reform law. They now emphasize connecting those formerly incarcerated with job openings and resources.

It also prohibits shackling pregnant prisoners. It requires that prisoners be held no more than 500 driving miles from their home. This enables family visitation, which can reduce recidivism.

On June 13 of this year, the White House hosted leaders who urged businesses to consider hiring those who have criminal records. “Too often, former inmates are not considered for jobs even if they’re qualified, rehabilitated, and ready to work,” said President Donald Trump at the event. “That’s why we’re taking crucial steps to encourage business to expand second-chance hiring practices.”

For more on the bill, see here.

“We’re hearing tons of stories like that, of people who have come home. Some have found jobs, while many need jobs and are actively looking.”

Under the First Step Act, Toney was released earlier this year after serving 16 years behind bars. The new law has reduced sentences for approximately one thousand people who have thus far been granted early release.

“We like to call this the last bipartisan issue in Congress,” said Heather Rice-Minus of Prison Fellowship. She serves as the group’s head of government affairs and church mobilization.

“The First Step Act has been a slow roll-out. [The law] set up a committee to advise on best practices, which hasn’t made any announcements yet. Also, the Bureau of Prisons has only an acting director which can delay marching orders from being implemented. There is an opportunity to bring someone in who has experience, one of these innovative leaders at the state level.”

Jackson stays in contact with the Department of Justice and other federal agencies responsible for carrying out the new law. She contends that Americans’ faulty assumptions about those incarcerated contribute to some facing unjust, harsh treatment.

“Media and mainstream movies would have you thinking people in prison are terrible people, but it’s just not true,” said Jackson.

“At #cut50, we spend a lot of time on the ground working with folks. These are people who don’t want to miss another valuable moment with their families and loved ones.”

The coalition believes “that every human being is a person made in God’s own image, a life worthy of respect and care,” Rice-Minus said.

“That applies to victims of crimes — and it also applies to people accused and responsible of crimes.” They ground views of justice and compassion in the Bible. Such a holistic view leads to better outcomes, the coalition contends. Prison Fellowship has shown the efficacy of their faith-based programs in helping former prisoners. Yet their classes offered inside prisons often face barriers of access.

“We have to do a better job spending the time with people while they’re incarcerated as productively as possible,” said Rice-Minus. “In various states, regulations now mandate all faith traditions be given an equal amount of program time and equal number of volunteers.”

Many chaplaincy programs in prisons allot quotas to Christian, Muslim, Jewish, and other ministries. The various faith programs must be evenly staffed with volunteers and clergy. When prisoners disproportionately seek out one faith group for ministry, it can create problems.

“From a religious liberty perspective, everyone should have the ability to worship in their own faith tradition,” said Rice-Minus. “Once that service is provided, when there’s additional demand, Prison Fellowship should not be precluded from having additional mentoring programs or other classes.”

Jackson points to another First Step Act provision currently in process. “One logistical change is to move prisoners to within 500 miles of their families,” she said. “That might not sound like a big deal, but it’s a lot of work for the DOJ to go through every federal prison.”

The law mandates a prisoner be held within 500 driving miles of their family residence. It makes visits from children and other family members more feasible, which Jackson calls “a huge benefit to everyone” involved.

“Relationships have been destroyed by the isolation of incarceration,” she said. “This way, people will be able to grow their support network prior to release. It’s a huge benefit to public safety.”

Catherine Toney, the 1st woman to be released under the First Step Act, thanks @realDonaldTrump for helping her. Based on proven reforms, the First Step Act now is now paving the way for additional state-level action.

Virginia leader D.J. Jordan is currently running for a seat in the state legislature. A former communications director for Senator James Lankford (R-Okla.), he recently released his policy agenda.

“The First Step Act started to pivot our criminal justice system from being purely punitive to being a little bit more restorative,” said Jordan.

“The fact is, reducing recidivism makes our communities safer. Here in Virginia, we need to support more programs within prisons to help people come out as responsible citizens.”

Jordan calls for greater support of former prisoners reentering society and other changes to decrease return stretches behind bars.

The Republican candidate shares this perspective with Jackson and her associate Van Jones. For partnering with the Trump administration, their group #cut50 has faced ongoing criticism from the left.

“Last year, Jared Kushner called from the White House asking us to help pass prison reform,” recounted Jackson. “When Van and I got that call, we didn’t feel like we could say no. We have a moral responsibility to help people who are inside prisons and their families who are at home.”

After passing the House on May 22, the legislation stalled for months. It faced vocal opponents in both parties. The First Step Act was finally signed into law on December 21.

“Jared and his team kept every single promise they made to us,” said Jackson. “In the end, we were able to pass a bill that benefited thousands of people and made our communities safer. Even though I don’t agree with the administration on many of their policies, this was one area where we were able to find some common ground.”

Learn more about Second Chance Hiring in the White House program below. Explore The Stream’s criminal justice reform coverage, and sign up to receive top stories.

A graduate of the University of Colorado, Josh M. Shepherd covers culture, faith, and public policy issues for media outlets including The Stream and The Federalist. Find him on Twitter and Facebook.