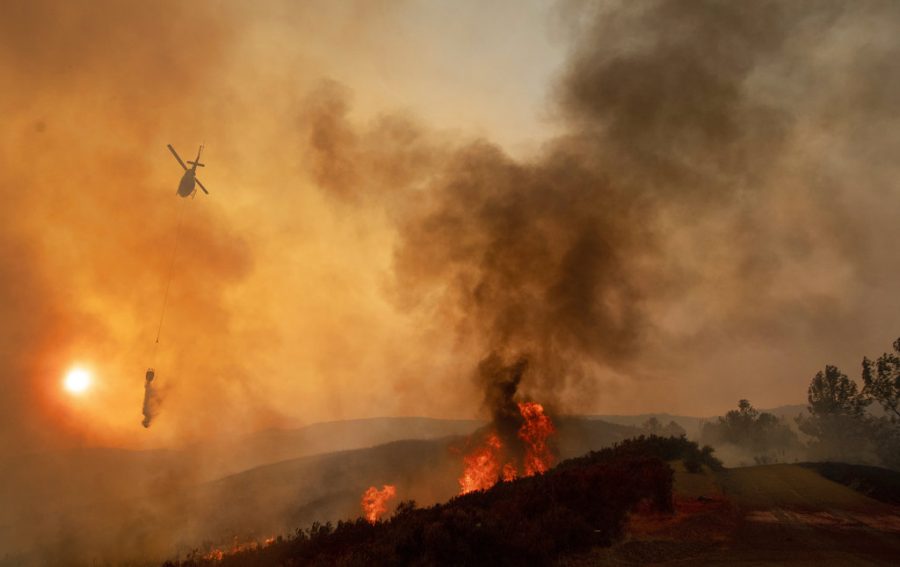 A helicopter drops water on a burning hillside during the Ranch Fire in Clearlake Oaks, Calif., Sunday, Aug. 5, 2018.

With wildfires engulfing over 620,000 acres of California, there’s been a concerted media campaign to single out man-made global warming as the primary force behind the deadly blazes.

But that’s not what the data suggests, according to University of Washington climate scientist Cliff Mass.

“So there is a lot misinformation going around in the media, some environmental advocacy groups and some politicians,” Mass wrote in the first of a series of blog posts analyzing the California wildfires.

“The story can’t be simply that warming is increasing the numbers of wildfires in California because the number of fires is declining. And area burned has not been increasing either,” Mass wrote.

Firefighters are struggling to put out the largest fire in recent decades, the Mendocino Complex fire, that has consumed over 300,000 acres in northern California. Environmentalists and some scientists have pushed a media narrative that blazes across the state to global warming.

“You warm the planet, you’re going to get more frequent and intense heat waves. You warm the soils, you dry them out, you get worst drought,” Mann said. “You bring all that together, and those are all the ingredients for unprecedented wildfires.”

However, Mass combed through California wildfire statistics, finding state figures showed a decrease in acres burned in four out of five regions. U.S. Forest Service data for public forests and lands in California shows mixed trends, with some regions having just as big of fires as in the 1920s.

“The bottom line of the real fire data produced by the State of California and in the peer-reviewed literature is clear: there has been no upward trend in the number of wildfires in California during the past decades,” Mass wrote on his blog.

“In fact, the frequency of fires has declined,” he wrote. “And in most of the state, there has not been an increasing trend in area burned during the past several decades.”

“Clearly, climate change is only one possible factor in controlling fire frequency and may not be the most important,” Mass wrote.

While seasonal weather is an important ingredient for wildfires, it’s not the only factor, making it particularly hard to attribute fires to global warming. Land management and population growth are also major factors, since most fires are started by humans.

A recent study found the risk of fire increased in once rural areas as populations increased, putting more buildings, plants, vehicles and other ignition sources in fire-prone areas that were once sparsely populated.

“This is a people problem,” U.S. Geological Survey fire scientist Jon Keeley told The San Jose Mercury News. “What’s changing is not the fires themselves but the fact that we have more and more people at risk.”

Mass authored a similar analysis of California’s 2017 wildfire season when many media outlets suggested the blazes were driven by man-made warming.

“Those that are claiming the global warming is having an impact are doing so either out of ignorance or their wish to use coastal wildfires for their own purposes,” Mass wrote in 2017.

“Wildfires are not a global warming issue, but a sustainable and resilience issue that our society, on both sides of the political spectrum, must deal with,” Mass wrote.

The Myth That the Polar Bear Population is Declining