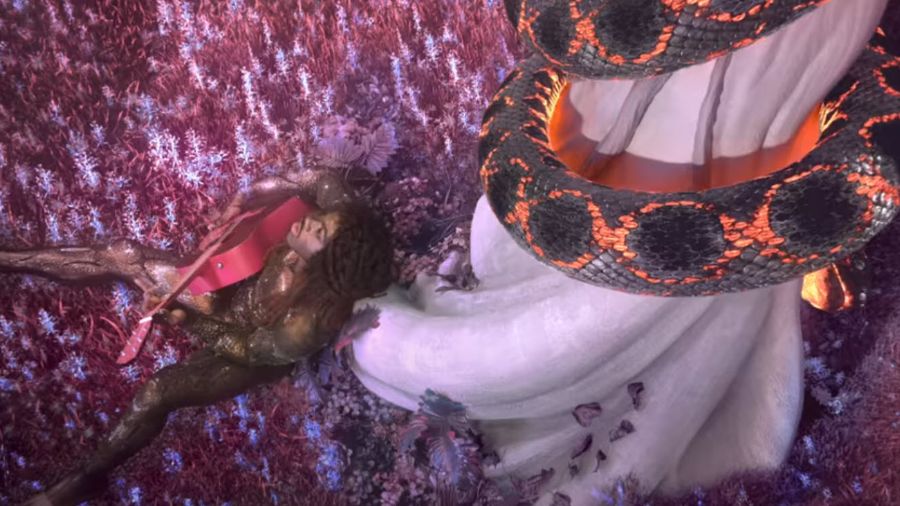 Lil Nas X flouts the biblical view of homosexuality by playing off of biblical imagery related to Satan in his music video. In this screenshot from his sexually explicit music video, he portrays himself in a Garden of Eden-esque setting with a snake in a tree.

Montero Lamar Hill, with stage name Lil Nas X, has released a song and a pair of shoes. Both are of note. The song is MONTERO (Call Me By Your Name), and might have something to do, so the singer said, of a time when he was a 14-year-old boy and recruited into homosexuality.

Let’s discuss the song first. Hill sings through a machine; the voice is over-processed, which I gather is standard in the days of the talentless. There is no melody, or even rhythm, to speak (or sing) of. There is only the man’s robotic voice overlaid with (surprisingly) mild machine-generated noises that almost resemble music. Almost.

The lyrics are, as expected, pornographic, although not as graphic as other hit songs. There are the now-obligatory “n—-a.” All told, rather dull. When the song announces “I’m not fazed, only here to sin,” it’s banal.

The video itself has a slick production, with many pretty colors and plenty of all things gay. (Note: It is Stream policy not to link to offensive, sexually suggestive videos.)

Hill descends into hell and then, as reported, gives a bored Satan a lap dance. The rapper himself takes pleasure from the implied sodomy, but Satan looks, at best, annoyed. This could be because, as Fr. Z reminds us, the demonic angels loathe sodomy just as much as the sane.

As Low as You Can Go

This is from St. Catherine of Siena’s conversation with God:

But these wretches not only do not bridle this fragility, but do worse, committing that accursed sin against nature, and as blind and fools with the light of their intellect darkened, they do not know the stench and misery in which they are. It is not only that this sin stinks before Me, Who am the Supreme and Eternal Truth, it does indeed displease Me so much and I hold it in such abomination that for it alone I buried five cities by a Divine judgment, My Divine justice being no longer able to endure it. This sin not only displeases Me as I have said, but also the devils whom these wretches have made their masters. Not that the evil displeases them because they like anything good, but because their nature was originally angelic, and their angelic nature causes them to loathe the sight of the actual commission of this enormous sin.

If you’re grossing out demons, you might want to consider a new line of work.

After the lap dance, Hill snaps the neck of Satan, killing him. He rips off Satan’s horns and dons them for himself, after which he grows wings and develops glowing eyes, reaching his apotheosis. We can only presume he is now Lord of Hell.

Which is not dissimilar to the message orthodox Christians try to impart about sodomy.

We are the Remnant

The song is popular. Almost 19 million views on YouTube when I saw it. All the big names are full of praise. The New York Times likes it.

The best summary is from Yahoo news, with this headline: “Lil Nas X gives masterclass in putting conservatives who call Montero (Call Me By Your Name) ‘evil’ in their place.” The author never spells out what this place is, but hints it isn’t a desirable location.

Riding on his popularity, Hill signed his name to tennis shoes. For the purpose of riling up normal people, they are called “Satan’s shoes.”

The shoes feature a painting of the damned in the box. There is a pentagram on the tongue (appropriate, given the video), “666” on the soles, a Nike swoosh, and, they say, but some dispute it, a drop of human blood in each shoe. Presumably this was supplied by one of the sweat shop workers.

They made 666 of the things, selling them for $1,018 a pair. I saw somewhere (but lost the link) of bids at least double that, which shows there’s more than one way to prove yourself a fool.

There is even a Bible verse pointer printed, “Luke 10:18.” This is when Jesus said, “I saw Satan fall like lightning from heaven.” So we have defeat printed on shoes (thank you; I’ll be here all week).

But when you enter a town and are not welcomed, go into its streets and say, “Even the dust of your town we wipe from our feet as a warning to you. Yet be sure of this: the kingdom of God has come near.” I tell you, it will be more bearable on that day for Sodom than for that town.