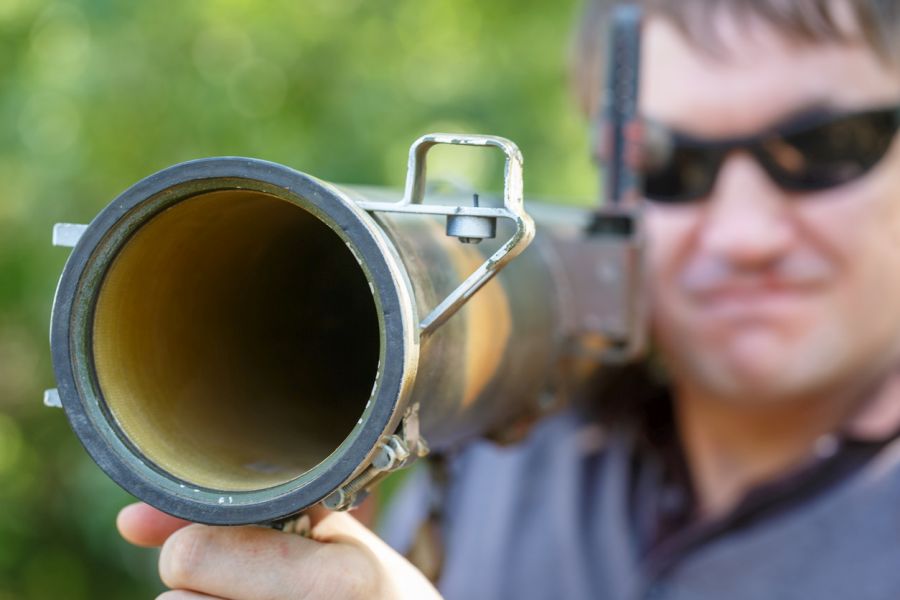 Fighting fire with fire is the rough justice of this world. We see something we regard as evil and “If I had a rocket launcher …”

The mobs busting up our cities and burning down neighborhoods would, no doubt, love to get their hands on a rocket launcher or two. But then again, how many of us good, God-fearing, Bible-believing, washed-in-the-blood Christians wouldn’t mind having a couple ourselves just in case. Or if not a rocket launcher, enough votes to take over. Put another way, “make somebody pay.”

Swift Justice is Inviting, But Jesus Calls for Righteousness

You have to admit that decisive, swift justice is an inviting prospect. Over the centuries emperors, popes, and Puritans have all succumbed to the idea no less than fascists, mobsters, and communists. The results in every case have been predictably bloody and tragic. Nonetheless we hunger and thirst for our kind of justice right now.

By contrast Jesus said, “Blessed are those who hunger and thirst after righteousness” (Matthew 5:6).

The word “righteousness” (along with its cognates) has gotten snarled up in our disagreements about the doctrine of justification and while those are important debates, there’s more to that word.

Righteousness is used, according to The Theological Dictionary of the New Testament, “for the right conduct of man which follows the will of God and is pleasing to Him, for the rectitude of life before God, for uprightness before His judgment” (II.198). That is, righteousness is a way of life that reflects God law, God’s will, and God’s judgment.

When he discovered that his betrothed, Mary, was pregnant, Joseph had the right to public accuse her of adultery and cast the first stone (Leviticus 20:10; John 8:3-5). Instead, “being a righteous man and unwilling to put her to shame, [he] resolved to send her away quietly” (Matthew 1:19).

Joseph’s righteousness was more than legal status. It defined his decision-making, the way he treated others, and his relationship to God and God’s Law.

Hunger and thirst for this, said Jesus.

Jesus went on: “Blessed are the merciful, for they will be shown mercy” (Matthew 5:7).

Righteousness defines our relationship to God. We are righteous by grace and by living lives that conform to God’s standards and avoid His judgment.

Act With Mercy. But Mercy is Not Indulgence.

Mercy defines our relationship to others. Which others? Those who are like us and, more important, those who are not like us: fire-bombing rioters, transgender rights advocates, tyrannical governors, anti-Christian neighbors, biased newscasters, racists, traitors, pornographers, and all enemies of the decent and the good.

Mercy is not, of course, indulgence. Righteousness informs mercy. The combination then allows us to speak gently and kindly, but also truthfully and directly, confronting the unrighteous, the sinful, the angry and the mean.

My goodness, you say, that will make us unpopular at least, perhaps even hated.

Indeed it might, but Jesus had that covered too: “Blessed are those who are persecuted because of righteousness, for theirs is the kingdom of heaven” (Matthew 5:10).

In his sermon on the Beatitudes, St. Leo the Great (400-461) told his hearers, “Recognize, Christian, the worth of your wisdom, and understand to what rewards you are called, and by what methods of discipline you must attain thereto. Mercy wishes you to be merciful, Righteousness to be righteous, that the Creator may be seen in His creature, and the image of God may be reflected in the mirror of the human heart expressed by the lines of imitation.”

By being righteous and merciful, we imitate God, exhibiting His image to others. He is the God who in the person of Jesus Christ fought sin and violent hatred with pure righteousness and unstinting mercy.

Having a rocket launcher, enough votes, or perhaps a ring of power to force people back to the good, the true, and the beautiful tempts us. But we are far better off adopting a stronger, more effective, and godlier policy.

While he didn’t write the line, J. R. R. Tolkien would have happy that in the movie version of The Hobbit Gandalf notes that some believe “it is only great power that can hold evil in check, but that is not what I have found. I found it is the small everyday deeds of ordinary folk that keep the darkness at bay. Small acts of kindness and love.”

Or, we might say, small acts of righteousness and mercy — the kind God has always used to change the world.